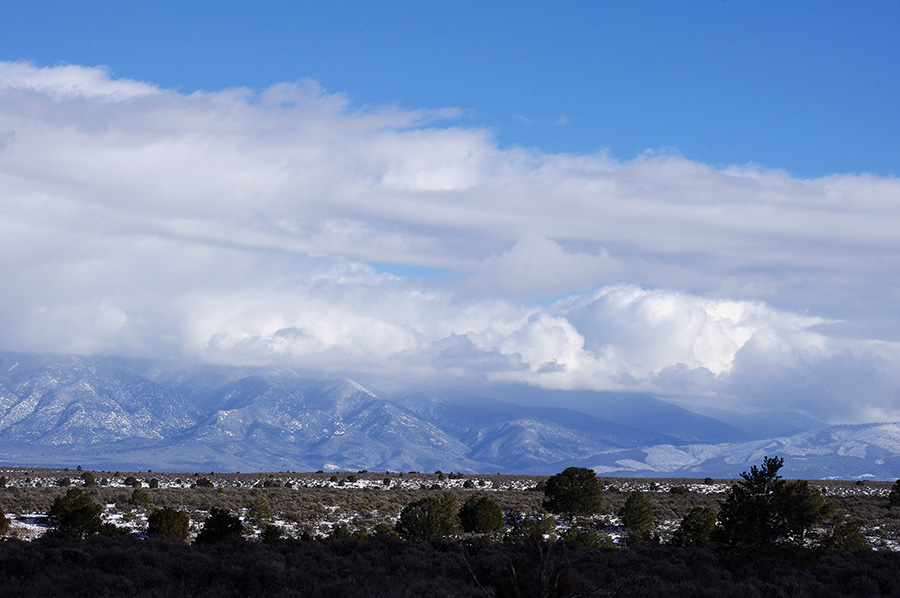 Taos Mountain’s in there somewhere but I love the clouds

That was the temperature when I took off yesterday to walk. It was just a little past ten o’clock. The trail at Taos Valley Overlook was suck-your-boots-off muddy just before it snowed the day before, but I hoped the mud would be frozen hard that early and it was. No one else was hiking.

There was a stiff breeze, too. I wore good boots, cargo pants from Walmart, a long-sleeved T-shirt, a zip-up sweatshirt, a big wool cowboy hat, and cheapo motorcycle gloves. Everything was black. At first my ears were cold, but then my blood ran faster and they didn’t hurt so much. When the sun came out, the hat absorbed enough solar energy to warm my head some more, and I was fine.

My heart was heavy when I started out, but I blamed no one and soon that went away. Who doesn’t love to be the first to walk a trail right after a snow? An inch of fresh powder meant that animal tracks stood out quite well. Footing was slippery in spots, but it was beautiful, by God, and I marched all the way to my two-mile cairn before I turned around.

Several times along the way, a raven came close by, suspended in the wind. I always heard it first. The pattern was that it would circle once or twice as it slid past, sunlight glinting off its glossy wings, then rise to catch another gust before it disappeared. Must be some hot blood inside that bird, I thought—inside me, too, I guess. The sight of it against the clean blue sky, gliding out above the gorge in total solitude, was absolutely grand.

I stood in awe and didn’t try to pull my camera out. No time for monkey business, anyway. Let the moment have my brain, that’s exactly what I need.