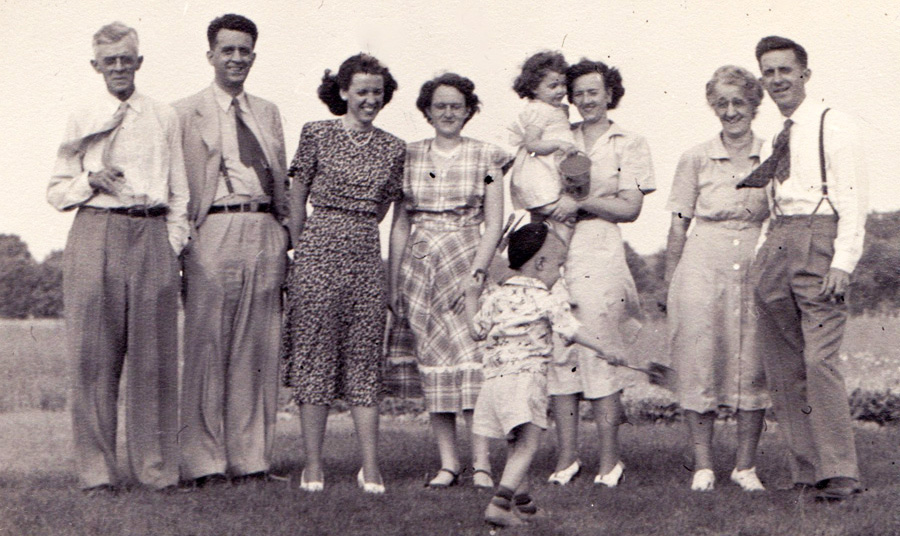 Just look at those happy people! That’s a photo my grandmother labeled “the Farr tribe” from late spring many years ago in Chestertown, Maryland. In the main row from the left, that’s Granddad, Uncle Bob, Aunt Mary, my mother Helen, Aunt Elsie holding cousin Joyce, Granny, my father John, with me in the propeller beanie out in front, paying no attention to whoever has the camera. And for the life of me, I can’t imagine who that could have been.

There exists another photo of the very same people taken three and a half years later that would shock you with its emotional rawness. It probably follows a nasty family fight, by which I mean my father or his brother cursing out a spouse in front of everyone. I don’t know where that behavior came from, either, the hurt and anger and the lashing out. Certainly not from my grandparents, who just weren’t that kind of people.

I found these photos in one of the four large boxes of family artifacts I inherited from Aunt Mary, who died this spring at 99 years old (her mother lived to be 100). The picture albums, clippings, cards, and other mementos constitute a huge historical trove that will be incomprehensible to my younger siblings when I’m gone. As it stands right now, I’m the only one of the surviving four who has a clue about our origins and can name the people in the photos. One album features over a hundred scenes from Parsons, West Virginia from 1900 to 1905, and every one is annotated by my grandmother! Another album features images from the Farr enclave in Big Flats, New York. What strikes me about those are that so many of my ancestors were farmers and how similar the homes are to older places on the Eastern Shore of Maryland. Also notable is how contemporary and playful my relatives appear when young. There are many, many pictures.

Consider too that with the death of my mother in April, 2012, I also acquired a similar store of photographs and artifacts from her side of the family in Baltimore. These are much less known to me for many reasons. Visits always favored my father’s relatives, not Helen’s, and we were an Air Force family that landed far away from the old ancestral haunts. But still, I have the records—from all indications, an extended, vigorous, accomplished clan. (Some of my older cousins from that side show up now and then to comment on this blog.)

For the last few years then, I’ve been deluged with physical evidence of the nature of the human beings from whom I came. To most of you, this must sound anticlimatic, as in, “Doesn’t everybody know these things?” It hasn’t been easy to look at all the photos, either. They’ve been known to rile me up real good:

“Why didn’t Mother tell us about these folks and take us for more visits?”

“My God, these people were okay!” (Not screwed up.)

This usually puts me in an evil depression. That’s what happened a few days ago after looking at various Farr family homesteads going back over a hundred years. The “little” retirement cottage my great-grandfather John Valentine Farr built in Halethorpe, MD was grander than anywhere my wife and I have lived: the space, the trees, the yard… Mere mortals—in this case a B & O Railroad office employee—might have several dwellings then: a big old farmhouse, the cottage out in back, a cabin in the mountains or at the seashore for cooling off in the summer. Many people with a modicum of education lived this way.

But it’s not the lifestyles that impressed me so much as these people’s basic integrity, the richness of their lives and the adventures that they obviously had. The pride, the personalities. Their involvement with life. I shunted recognition of this away for decades because my own upbringing was largely dysfunctional, and it would have hurt too much to think we were the different ones. I even used to say that “family” was a dirty word. Given the pain associated with my origin—especially after growing up—how could I think otherwise? And now I’ve lived long enough to see that this is really not the case at all. Some modulation is required. Even my birth family began in great hope and excitement: the war was over, the world was at their feet, and the kid got plenty of attention at the start. (Look at the women’s faces in that photo!)

This may sound strange to anyone who’s led a long and fairly normal life, but now I have a chance at being who I really am. Not just a lonely cracked survivor of whatever hell my poor parents cooked up for themselves, but heir to centuries of psychic and genetic gold. This actually works, you know. I feel richer already, thrust forward into time by all that energy. The upshot is that I no longer “hate” the places or the people that I came from. Ever wary, to be sure, but not abandoned or condemned—as if I can tell the truth at last and not go mad.

Most surprising of all (and probably bigger than I know), I’m calmer about being here right now at seven thousand feet in Taos with the winter coming on. This afternoon I painted the rickety screen door on our rented adobe because it makes me happier to see it not look like Tobacco Road. Over ten years I’ve lived here, we know we want to move, and finally I paint the goddamn door!