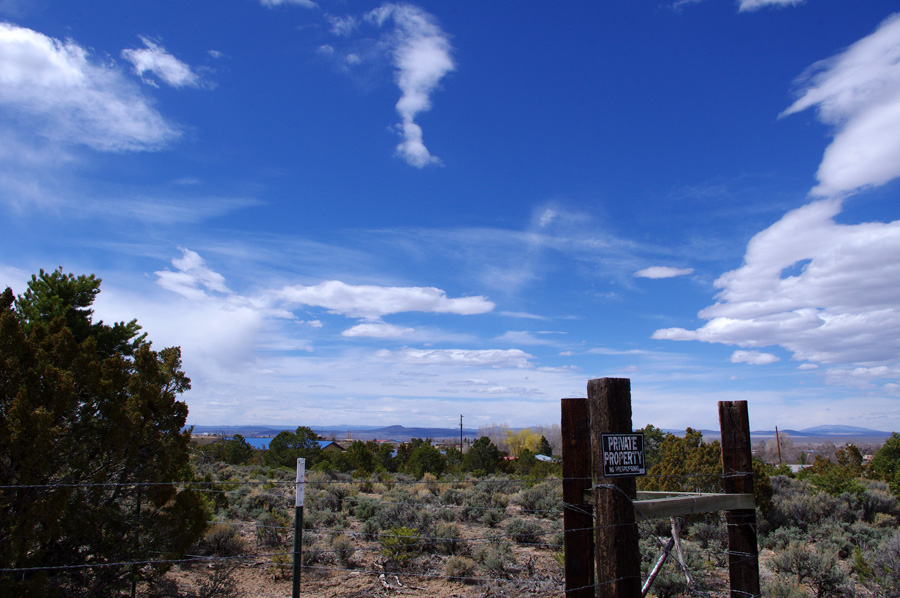 This picture is so brilliant, I don’t know where to start

Warm and windy now, about 67 °F (19.5 °C), humidity 16%. You can do anything in weather like this, because the sun is glorious but you don’t get sweaty. So long as what you’re working on doesn’t blow away, it’s kind of miraculous, really. That cool/warm thing where you’re fine in shorts and T-shirt so long as you’re not sitting in the shade. The wind is blowing pretty hard, though. Every now and then a bucket of driveway dust blows past the open front door. That’s kind of a feature in these parts.

Naturally I took my four-mile hike today. As fast as I coud, no ambling. Two days ago I did the same and missed the cairn I built to mark the two-mile turnaround, walking a full quarter-mile beyond before I realized where I was. I love it when that happens. Today it hit me somewhere on the mesa in a sea of sagebrush: where the hell am I? SHUSH! And then I try to hold the state as long as possible. Oh sure.

There was more bird activity as well. Some kind of wren, I think, that ran down the trail ahead of me like a miniature roadrunner, then pivoted and fled into the bushes. I saw more than one piñon jay fly into a, uh, piñon tree and disappear. They must be nesting, because one flew out squawking with a fecal sack (doesn’t that sound just like a mother?), the avian equivalent of your neighbor tossing dirty diapers out her window. I wonder where they take those things.

This morning I was upset because I went to the dentist yesterday and now I’m out $2,500, just like that. I ranted at the office manager over the phone for no good reason—teeth are teeth and I know what I’m doing—but later called back to leave a message saying “never mind.” (It wasn’t her fault, anyway.) At the recycling center on the way out to do my hike I called my wife and told her, “It’s no good worrying about this stuff. All I have to do is love you, have a good life, and be a writer.” She laughed and drove off to get her hair cut.

This is how it happens in the spring. And then it snows in May.