The first thing that happened today was that I got mad because I got a “gift.” Two of them, actually.

Both packages contained books, giant software manuals the size of big city telephone books. I’d originally signed up to review them, so I could get them for free, naturally, but the moral burden proved crushing — too many reviews, too little time for personal projects that mean something — so I told the publisher’s contact person and the review coordinator at MyMac.com that I wouldn’t be doing the reviews after all. The books came anyway, and I was pissed. Just something else in my way, dammit. But what’s truly in my way is my own greed and stinginess: after all, for just two hours of Web work at my usual rate, I could buy my own damn copies, and I guarantee you that any review I undertake will cost a bunch more hours than that. Idiot! Maybe I’ll keep them, maybe I won’t, who knows?

Meanwhile, in an alternate universe inhabited by the sane, the love of my life keeps moving on with what’s important. Take this, for example: 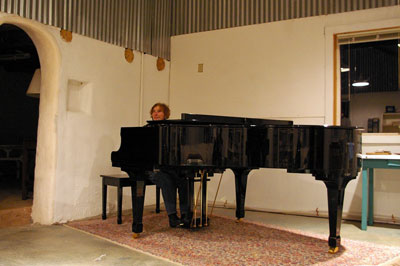 It only took three years

That’s her new piano. My cousin bought it for her three years ago when she was living in Dubuque, but it couldn’t be brought into the house where she was living then. The K. Kawai has been domiciled at her sister’s condo ever since, until today. Imagine having something so important to you, but not being able to utilize it. That’s been the situation all this time, for a myriad of reasons, and the pathos has nearly been unbearable.

The first thing she played on it this evening was Paderewski’s Minuet in G. That’s a talisman. When she was a little girl with only an inherited ancient upright to play on, her parents told her they would buy her a new piano if she learned the Paderewski piece and the Missouri Walz, the latter being her father’s request. She learned the music and they kept their promise, buying her the piano, the very same old Hamilton that lives in her studio today. For me, the best part was when she opened the piano bench of her childhood piano and took out the manuscript (sheet music) for the Minuet in G, which has always been there, in the bench, for more than 50 years!

I could no more imagine my parents doing anything like that than I could grow another head. The love, the trust, the support for the essence of who she was — this is so monumental to me, I almost have to worship it.

Powerful medicine today, people, in the presence of the unbroken circle…