ANOTHER DAY IN PARADISE: Notes from Taos 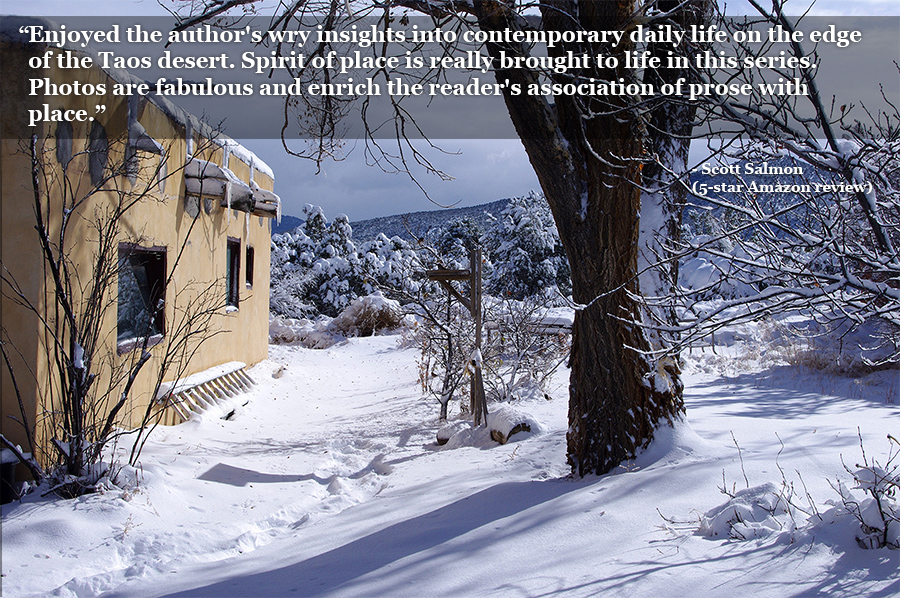 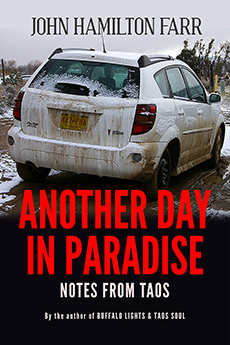 “The floor is hand-smoothed adobe mud spread directly on the roughly leveled earth. The internet cable comes in through a hole at my feet drilled through eighteen inches of adobe bricks. There’s a wood stove and a gas wall heater. No ceiling lights or closets. The oldest washing machine I’ve ever used empties into the kitchen sink unless you forget to hook up the hose. Once I found a baby scorpion on the counter. Black widows thrive in nooks and corners. We’ve had coyotes, foxes, and stray cattle ten feet from the back door. There’s a ninety-mile view from the mailbox. Northern New Mexico (El Norte) is one of the most compelling places I’ve ever lived, with impossible vistas, extremes of climate, mountains, deserts, wildlife, and extraordinary people. It’s also ancient, isolated, and harsh. We came here from established lives in Maryland in 1999, neither of us young or wealthy. Speaking for myself, it was the most outrageous, dangerous, and necessary thing I’ve ever done.”

That passage begins the Introduction / Prologue to ANOTHER DAY IN PARADISE: Notes from Taos ($9.99). Here’s the last part of that section:

The worst thing one can do regarding Taos is be seduced by marketing and myth. For all the spectacular surroundings and cultural diversity, Taos is anything but “nice.” Its history is wild and violent, laced with suffering and greed. There’s a deep, dark energy in the landscape and the kind of people attracted to such things that ruins you for normal life, not always in a good way. The physical town is a textbook example of unchecked sprawl, lacking proper infrastructure, and expensive. Out-of-place retirees in shiny new Subarus drive up and down the one main street like Wile E. Coyote stepping off a cliff. Realtors and bandits run amok. As a resident of thirty years said recently, “It’s a love/hate relationship for me, but I can’t seem to find another community of misfits I might fit into!”

Never mind, the mountains call. You will not find your grounding here, but in the stars.

Notes on the Ebook

This is the best “pure ebook” yet. Designed in iBooks Author, both the Amazon and iBooks versions display beautifully on all compatible platforms. All photographs by John Hamilton Farr. $9.99. About 43K words, featuring 85 high-resolution photographs. ASIN B01H8MIS56 (Kindle), ISBN: 978-0-9830838-4-9. Available at these digital stores.

Truck Sins and Redemption, Battle of the Feast Day Pumpkin Stew, Walmart and the Wood Thing, High Desert Freeze, One Fine Week in the Mountains, Crank It Up, Wednesday Morning Elk, Happy Easter, Leaks-Tar-and-Broken-Brooms, Road Work, The Necessity of Bears and Exercise, Old Taos (in the Snow) Again, Lunacy at the End of the Road, Foggy Morning Breakdown, Up in the Hills, Seven Degrees at the Edge of Town, It Has to Be a Sign, My Aim is True, Poor Ole Dove, Just Like in a Motel, Frontier Laundry Day, My Neighbor Has Pit Bulls, The Neighbors Are Gone