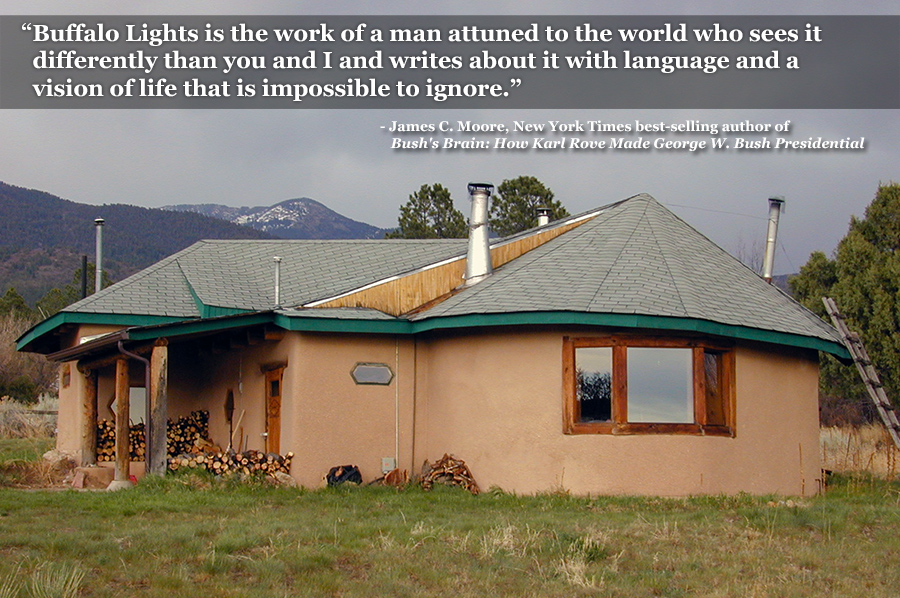 The “adobe cottage” in San Cristobal in 2001. Life at eight thousand feet! 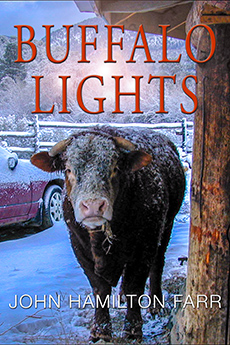 “We were driving home after dark from Taos to San Cristobal the way we usually did, past the Indian lands to the east. As we neared the place where Kathy liked to spot the pueblo’s dark brown buffalo herd at the foot of the mountain, she stared into the deepening gloom and mused, ‘They sure would be easier to see if they’d put lights on them.’ Buffalo lights! How utterly improbable yet somehow plausible in the context of this place. Whether she knew it or not, she had created a nugget of myth that would tie us to the great beasts forever, for neither of us would ever pass that way again without remembering.”

Now you know the secret of the title. The above is Prologue: The Myth, from BUFFALO LIGHTS: Maryland to New Mexico ($9.99). From the back cover of the original print edition:

At age 55 the author and his wife, a college professor, trade burn-out for glory on a pure leap of faith. Life in a high mountain village bears no resemblance to the world they left behind, and New Mexico is famous for plans not working like they would elsewhere. In the 21st-century American Southwest, there’s a bull in the window and a rat under the bed. John and his wife dodge gunshots at Christmas, sink in mud to the axles, and find human bones in the dirt. Along the way he meets a shaman, Buddhist monks, knife-toting tough guys, a guru mechanic, Jesus himself, and the devil’s own dogs.

This book covers the years 1999 to 2004. (For 2005-2010, please see TAOS SOUL.) A great deal of the material in this book—covering the first few years of our move—appears here for the first time; the rest comes from several sources. Some chapters are reworked “El Emigrante” columns originally published in Horse Fly (a local Taos publication), others began as “Farr Site” essays published online at Applelinks.com or Zoozone.com, and a few originated as “Emigrante Moon” pieces at JHFarr.com.

Notes on the Latest Edition

An improved, revised ebook version of the original classic, featuring over 40 color photographs. The principle differences between this ebook and the print edition are the new cover, the addition of the photographs, and assorted edits. With the exception of the new images and two chapters that didn’t make the final cut, the ebook edition is the same as the original paperback published in 2005. All photographs by John Hamilton Farr. $9.99. About 45K words, photo-illustrated. ASIN B004HILSCU (Kindle), ISBN: 978-0-9830838-2-5. Available at these digital stores.

Betrayal, The Grownup Manual, A Little Farther Out of Town, Light in My Eyes, Moving Hell

Easter in the Wilderness, Sentimental Divide, A Place to Visit?, Earth Day 2001, Prince of Pain, Death at Seven Degrees, The Blue That Comes All the Way Down, Mother’s Mousedog (8-2001, Tucson, AZ)

A Garden and a Clothesline, Walking Red Robes, High Desert Heart, I Carried Jesus, Way o’ the West, Virgin in the Flames, My Mechanic (My Guru)

The White Car, Tale of the Shaman, The Spirit of a Place (and How to Find It), Native Plant, Freedom to Believe

A Gift of Memory