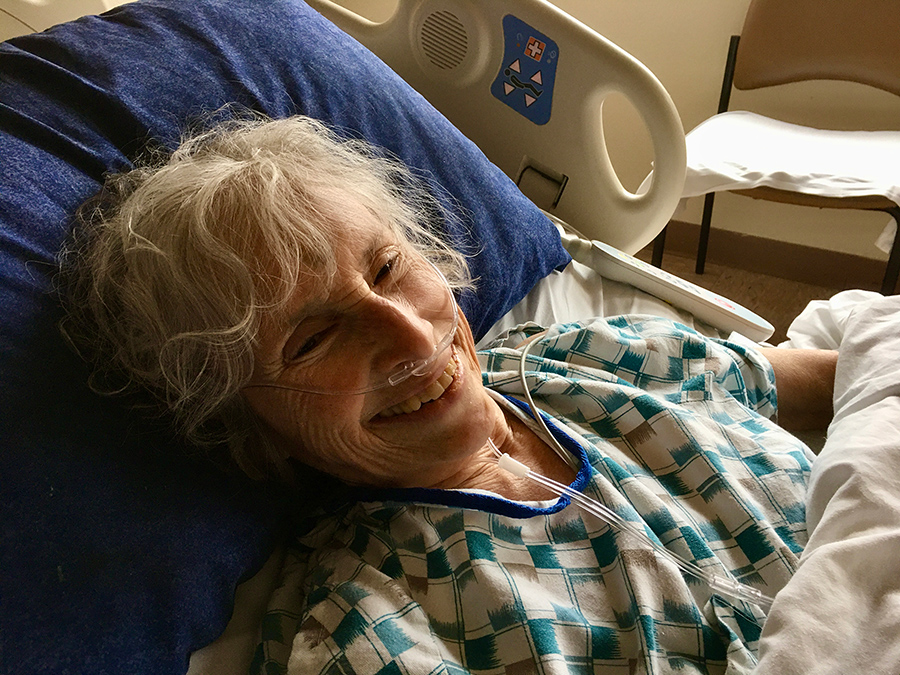 Sweet Kathy two days after an eternity ago

What the everloving hell? She turned and flopped and flailed her arms. This was crazy. “Honey, what’s the matter?” I pleaded in the dark at 3:00 a.m. No answer. Flop and spin, limbs slapping me all over, no words. Good God. I turned on the light: my honey was contorted, head turned to the right, eyes and mouth wide open. Breathing, couldn’t talk or move her eyes. Holy Mother of God. I wasn’t hysterical, though. This had to be a stroke or snakebite. I grabbed my phone and dialed 911. The EMTs showed up 15 minutes later., two guys wrestled the stretcher through the narrow doorway, scooped her up in the bottom sheet, loaded her in the back, and split. I followed in her car down the dark and empty road. It was freezing cold. The flashing ambulance lights were so bright I had to shield my eyes. They hit 65 mph on the main road heading for the hospital. Until then I’d been all business, only now it slammed me: “KATHY!!! STAY WITH US, HONEY!!!” I yelled, sobbing as I drove. Stupid husband trick, following the ambulance in the dark, all helpless like a fool.

Who knows what the hell they did to her as soon as we arrived. Probably every scan and test you ever heard of. Her mouth stayed open, her eyes began to move a little, and then she moved her arms. I spent the next five hours wrestling with her to keep her from yanking out the tubes and wires. Every 30 minutes a different nurse or doctor came by to tell me they were working on getting her admitted. Someone brought me coffee I didn’t have a chance to drink. I had her purse with me in case they wanted her Medicare number but no one ever asked me anything. Finally they wheeled her into a room on the other side of the building, far away down a forever corridor. There was a motorized recliner for me so I could stay there with her. The door closed, and that was it for us for three whole days except for constant interruptions taking vital signs, blood and urine samples, doctors, nurses, people to “counsel” me and hand me pamphlets that I haven’t even opened five days later. It all went just like that, ka-boom.

She got better, sort of, but was still a wreck. Crying, disoriented, wanting to go home. This became a theme. Her memory was shot. At one point when it wasn’t, she wanted to know just what had happened and I told her. More shock and disbelief before she slipped back into the fog. I fed her half a dozen spoonfuls of puréed mush three times a day and gave her lemonade and water. A couple times we staggered to the bathroom after midnight with her diaper falling down so she could pee. (I never wiped my wife before but add this to the tricks.) Feeding her was almost holy. When the nurse came in to change her once, I helped to turn her on her side. The skin on her back, her butt, the back of her legs was perfect. Where had all the stretch marks gone or had they ever been there, really? She glowed smoothly like a teenage girl. I thought it was so beautiful. The warmth, the love, the light that shone within.

The next stage needed to be rehab. She sure wasn’t ready to come home, and home was in no shape for her. Piles and clutter wouldn’t do. Medicare would pay for 20 days in the clinic adjacent to the hospital. She’d get four hours a day of speech, physical, and occupational therapy, and maybe I could get the house in order. The people we talked to at the hospital were certain the draconian “no visitors” rules had been relaxed, since all the staff was vaccinated and my wife would be in quarantine for two weeks anyway. I figured I’d be there for several hours a day, watch the therapists, and get an education as her coach. You know where this is going, right?

Five days ago they dropped the bomb on us:

With just one hour’s notice, they told us that she’d be discharged and taken next door to the rehab unit, but I couldn’t come. No visiting hours, ever. Period. The rules in fact had not been changed or relaxed in any way. We were devastated, terrified, in shock. I’d been reassuring her that I’d be there to see her every day, bring her things, and ease the pain of isolation every minute they’d allow me—which turned out to be zero. I watched the nurse wheel her down the hall next door, terrified of how she’d manage.

Not that well so far. The FaceTime visits haven’t really worked, not for someone who’s just had a stroke. This afternoon I found a message from two days ago I’d missed somehow, just her crying in the dark: “I need you, John. John? John???” but there was nothing I could have done. She has to stay, just two more weeks, except I worry that her mind is going, going, wandering like she is, up and down the corridor, the stroke and what that does inside the brain. There’s another issue, too: they found a blood clot in her heart and saw it wasn’t pumping like it should. All this tears at memory and reason. Forty years together and she has to pull out of the fear and madness on her own until she’s here and I can feel her warmth and lie that everything will be okay.

Don’t get sick in a pandemic. Do not, do not ever, ever, ever…

Sunday morning before we knew she’d be discharged on Monday, I looked out the window. It was gray cold spitty day. Suddenly a big brown coyote trotted out of nowhere to sniff around a patch of dry brown grass between our building and the rehab clinic. At that exact moment my wife said that she’d just had the thought that “everything was over…” I thought I heard some irony in how she said it, as if her words were less a statement than a proposition. The coyote was still there like he was listening, maybe 30 feet away, until he turned and vanished in the sagebrush. The goddamn trickster, plain as anything, but where’s the joke? That she was right or she was wrong?

Or that it’s just a big brown dog-thing in the grass? 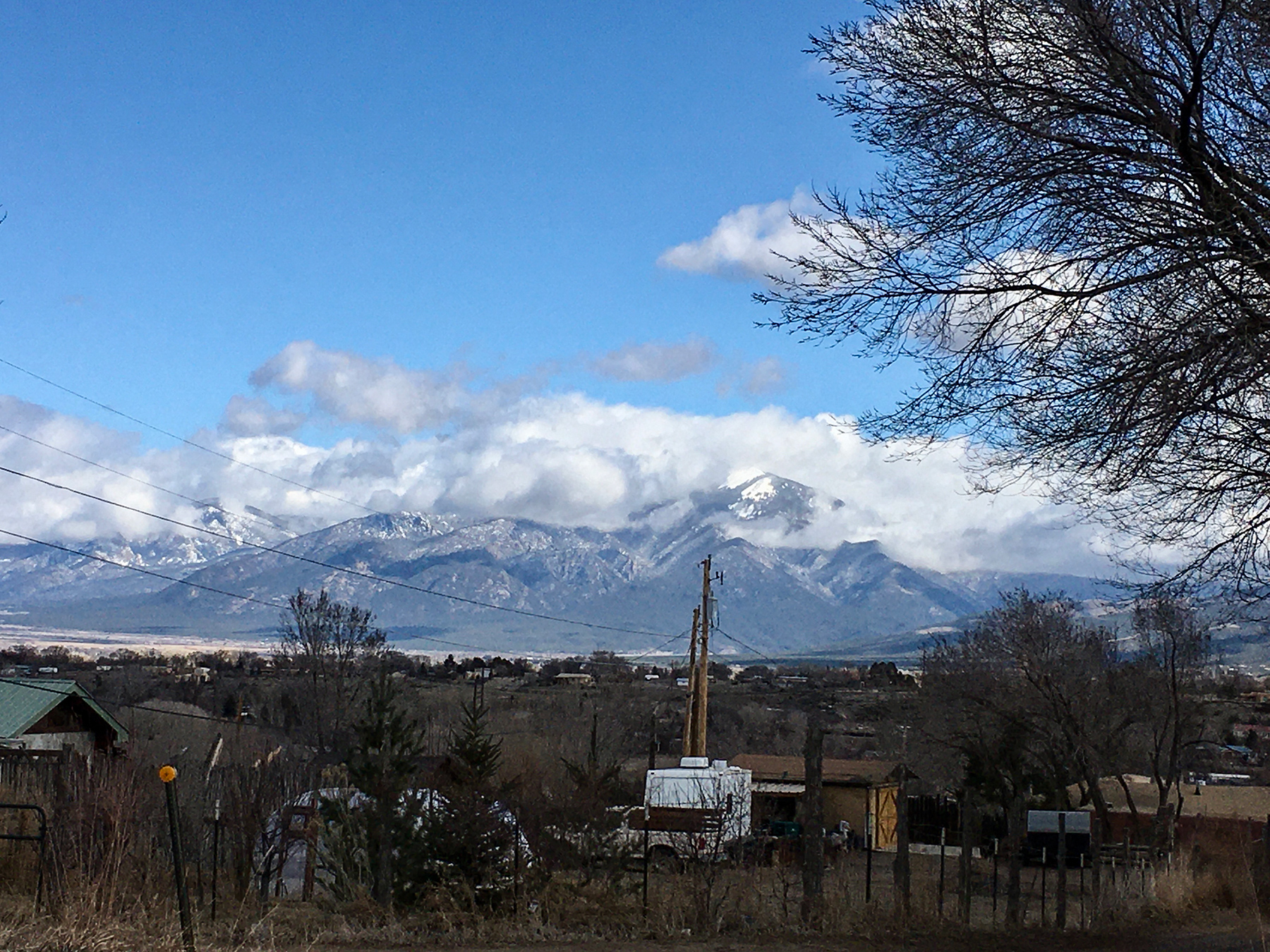