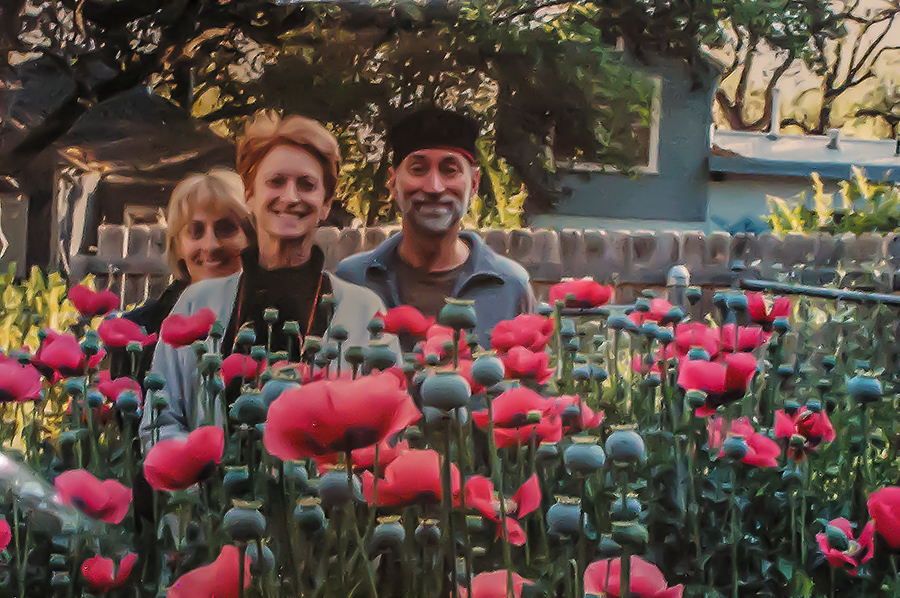 In the back yard in Austin

That’s my sister Teresa in the center with her husband on the right. And yes, those are what you think they are—I still have a baggie full of seeds and wonder if they’re any good. She died of liver cancer in 2010 and hardly a day goes by without my thinking of her. A lifelong artist, she settled in Austin after graduating from U.T. and never left. For years she supported herself by selling her silk-screened art works on the Drag across from the student union building. If I started telling stories about her now, I’d never stop, like how she used to rollerblade on windy days with a handheld sail she built with a hula hoop, or the time she invented “cat fishing” by casting a fuzzy lure down a long steep hill above the original Whole Foods store and getting the neighborhood cats to follow it up to her house. She had her life and I had mine in mundane day-to-day existence, but the thing was we were close in spirit…

As far as I know, she never spent a day in the hospital her entire life. When the doctors diagnosed liver cancer, she immediately ruled out surgery or life-extending therapies and devoted herself to preparing for the next adventure. That was Teresa, all the way. I was shocked at first, but part of me was grateful—there’d be no denial or false hopes, all of us would have to focus, be there with her, pay attention. Going back and forth to Austin that summer was a bitch, all the more so since I hadn’t seen her much those last few years. She was bright and cheerful the entire time, as far as I could tell. One morning in August I got the phone call here in Taos and fell apart. Soon after she died, my cousin Joyce emailed me, “She worshipped you, Johnny, did you know that?”

Oh my. Maybe. There was so much in the way. Three years after she died, on this exact same date in late November, I wrote a blog post called “Dead Sister’s Radio” that comes to me now, so here you go:

It was several years before she died. In the Christmas package from Austin was (among other things) a little red wind-up AM-FM radio with a solar panel for recharging. I’d always wanted one, and there it was. She must have known or guessed right, since she knew me.

A radio for someone in the boonies used to be a precious thing before you just picked up your phone and watched TV. When I was living in my eight-by-sixteen handbuilt shack in Arkansas in ’71, I had a small transistor radio—that’s what we called them then—I’d bought in high school years before. I was so proud because I’d earned the money for it working after school folding ladies’ blouses at Mays Department Store in Massapequa, NY, and no one else I knew had such a thing. How this one followed me to the Ozarks is a mystery, but there it was. I’d stand there in my hut, freezing and stamping my feet, and listen to a station out of Fayetteville. My favorite song was “Maggie May.” To this day it takes me back to wet snow, the smell of rotting oak leaves, and enfoldment by surrounding woods where I was the only one around for miles.

As it turned out, I didn’t use the little red radio from Teresa all that much. I had the Internet for news and music. But I took it with me when I camped and kept it on a shelf here, just in case. A couple of months ago I dusted it off and set it where I could see it, who knows the reason why. Two days ago it snowed again and gloomy clouds hung low like they still do. The frozen mud and isolation of el Norte settled in like truth and gave me pause. I placed the radio in the kitchen window sill, where it might pick up a little charge, and this morning turned it on. All alone at home, I tuned it to an Alamosa, CO public station 90 miles away. The sense of deja vu was palpable: my sister, Arkansas, the winter, all the rest. A Roy Buchanan guitar solo crackled through the speaker while the battery ran down, and then all was still.

I’ll leave it there switched on. When the sun comes out again, the battery will charge, and slowly, quietly at first, the radio will come to life again, all on its own. Are people like that, do you think? When something greater than us reaches down and touches us, do we come back from the almost-dead and have another chance? Or do the years we missed corrode us so we drag the rust around forever?

I still can’t think of her without the tears. When I left Austin in May of ’75, I was so fucked up and drama-ridden, I’d forgotten to say goodbye. She came to the door the night before, her eyes all red from crying. (She’d even baked some cookies to take with me on the road.) I see her now, and I could sob all day.

Five years later I was out walking at Taos Valley Overlook, far out on the mesa with no one else around. At a certain spot, I took off my hat, stood up straight, and tried emptying my mind in stages—deeper, deeper, deeper—like I sometimes do in special places. It can take a while to just be blank and listening, but if I’m calm and present, something always happens. This time I heard words quite clearly in my head. “Have fun,” twice, for emphasis, loud and in no voice I recognized. Had the angels finally found a nail to pound into my skull? Stepping back onto the trail, I thought of Teresa, who would have had no problem with this teaching. A couple years before that in the same location (!), I’d heard her in my mind—it was absolutely her—far away and oh so quiet, like the echo of a whisper, “Be yourself,” in fact.

Earlier this year back in August, I woke up before dawn, shaken by a dream. (The good ones do that.) I didn’t write it down the way one must, but lay there turning it over and over in my brain until I thought I had the lesson. The holograms faded quickly, but I remember about being okay, how the course of my life was blessed after all, and all I had to do was be myself. No societal approval needed, no self-help manual, no “sensible” way to do a goddamned thing. No tragedy, no missing love. All is well. Just do it. Be myself. Wow, just like she told me as a ghost! Later that morning it hit me:

Ten years to the day, the very moment, that Teresa died! 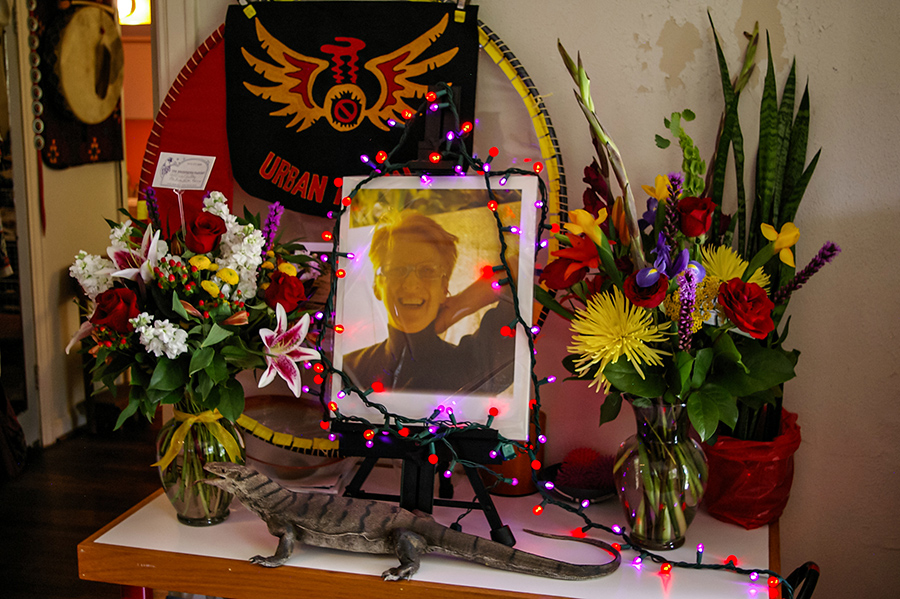