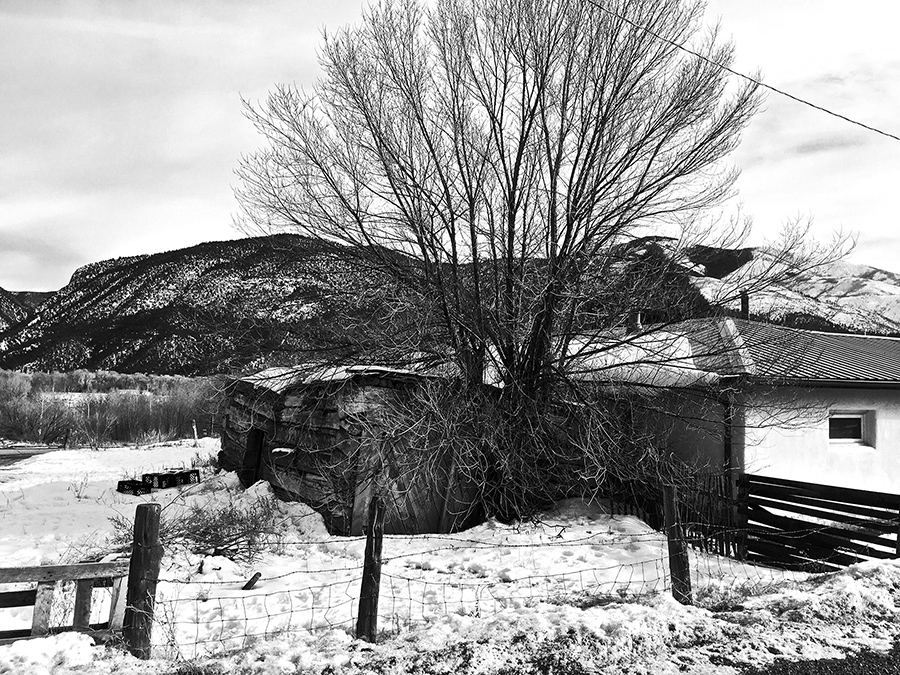 Questa, of course. Buy this photo!

There we were, leaving the Ranchos valley heading up Blueberry Hill [sic] on the way to Questa to drive by a house. It was one of those mostly sunny winter days with shifting layers of half-clouds against a deep blue sky. A thin coating of snow lay all about, already turned to mud along the rocky roads that passed by scattered brown houses in the sagebrush. Despite the latter, the view was splendid. I had no expectations for the listing and am usually wary of Questa. This quiet Sunday afternoon I felt more curious. The sunshine and lack of traffic likely helped.

“Instead of saying, oh no, we’ll never live there,” I said, “I’m going to think of good things about Questa. [clears throat] Okay, it’s closer to real wilderness, cheaper than Taos, and…um…oh, it’s easier to buy heroin there! Ha-ha.”

She paid me no mind and looked out the window.

“Hey, remember when we lived in San Cristobal and Bill Whaley wouldn’t hire me to be the Horse Fly reporter for Questa because he thought I was too naive and might get killed?”

My default state of mind had won. She was living her appreciation, I was hosting a late night talk show.

The mountains were stupendous, and the road stretched on across the mesa, plunging through Arroyo Hondo, down the curve and across the valley where San Cristobal splayed out along the creek, up the steep half-mile to Garrapata Ridge, past Lama where Baba Ram Dass wrote Be Here Now, finally dropping down to Questa, a roller coaster 30-minute ride over the shoulders of snowy peaks, past miles of forest, distant dead volcanoes, views to sharp horizons all the way to Colorado.

“I can’t believe we live here,” someone said.

It could have been either one or both of us. There’s nothing like this anywhere I’ve ever lived, and I have been around. In my elevated state of mind, the lumpy, broken semi-pavement on Cabresto Road was just the way it was, and no one cursed. The house we’d come to “drive by” was way across a valley from a ridge that felt like darkest West Virginia, crammed with trailers, old adobes, and a few nice homes. The entrance to the lane was dark and rough and steep. I didn’t turn there since we weren’t expected. An old man in a flannel shirt came walking down the road. We passed him and explored a little more, circumnavigating the valley before retracing our entire route. No one else was out and I drove very slowly.

The thing was, neither one of us was judging. My wife is good like that. I can be an uptight jerk and on this afternoon, I wasn’t. On the way back down Cabresto Road, I saw a hand-painted wooden sign that simply read “CHURCH” with a great big arrow, so of course I did as I was told. We ended up behind a stunning large adobe building, San Antonio de Padua Catholic Church. I’d heard about the place for years and never ventured two blocks off the highway to investigate.

We were in a different dimension. That’s really all there is to say. Despite the mud, I got out and walked around. My wife was grooving, giving off vibrations like a tuning fork, and stayed put in the car. It was cold and gray by now, the air was still, and all around was utter quiet. In the courtyard by the entrance, I saw someone sitting on a bench. It was the same old man in the flannel shirt we’d seen before (probably younger than I am), leaning forward with his hands together. I thought he was looking at his phone, would you believe it. Of course, the man was praying. He stood up as I approached, we said hello, and he went slowly back the way he’d come. I located the visitor’s entrance and tried the door. Much to my surprise, it opened, and I entered.

The lights were off and there was little light coming through the windows, so I could hardly make out much more than the altar and the pews. The carpet underfoot was soft, the air perfumed with incense. I carefully turned around, took three steps out, and latched the door.

What on earth had happened?

The drive back home was just as wondrous. I was—we were—in this place. Twenty years, and it had always been here. Maybe I was not.