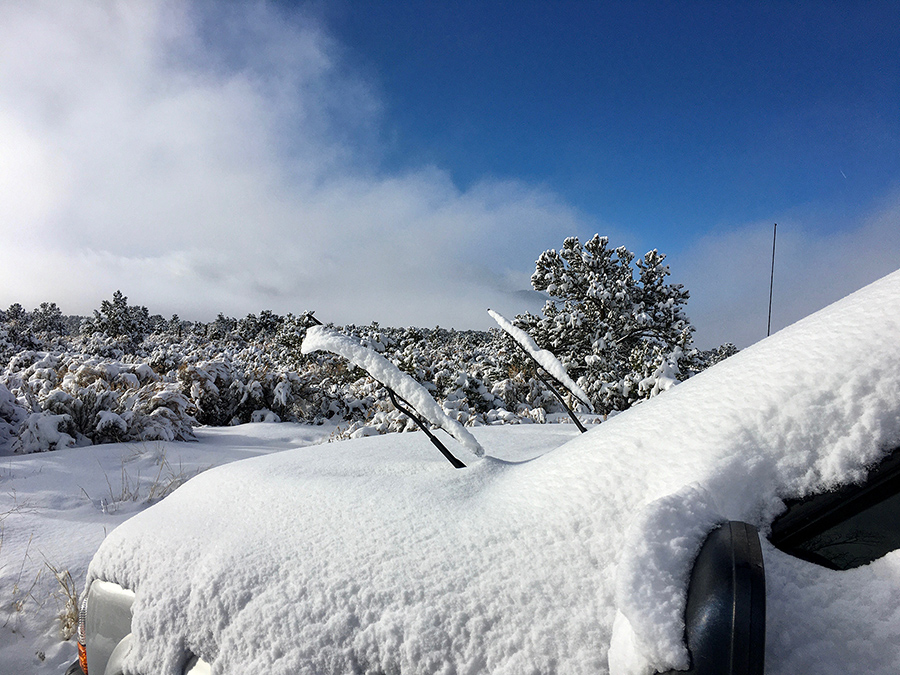 Friday morning looked like this. The stuff was roughly four inches deep and sticky-wet, like heavy cotton candy I imagined, as if I’ve ever tasted any. Instant snowball makings, anyway. I walked up to the top of the driveway, decided the Vibe would never make it out, and cleared the windshields of both vehicles so the sun would shine in, warm the interiors, and melt clean all the glass. I had an errand to run later and knew the Dakota 4WD would do the trick. The rest of the morning was for shoveling paths.

After lunch I headed out to take off for my trip to town. Not only was the glass completely clean all around on both machines, the roofs and sides were dry and shiny. Sunlight, baby, plenty hot at 7,000 feet even in the winter. I climbed into the Dodge. Everything was fine until I turned the key: the fuel pump powered up, or tried to, the starter solenoid did a little clickety-click tap dance thing, and that was it.

I knew exactly what this meant but had to test. No, the windows didn’t work, and the headlights were a little dim. Some juice, then, but not enough. I trudged down and back up through the snow with my trusty Radio Shack voltmeter (where do people buy such things today?) and got a reading of 10 volts. Well, hell. The Vibe would never make it and I was already shot. No way was I going to wait around for AAA to come jump-start the Dodge, and besides, the wind was picking up. Tomorrow was another day and that was fine. I’d see if O’Reilly’s had a battery, juggle some funds around, and call AAA as soon as I knew what I’d be facing.

Last night I researched batteries. My God the things had gone the way of insulin and houses. But O’Reilly’s had one that fit exactly (size group 27), was stronger than the one I had, and cost a semi-reasonable $139 plus tax and $18 for something called a core fee. That, it turned out, meant you got the fee back if you gave up your old battery, hey-hey. The fucking thing weighed 50 pounds but there were 4.9 liters of engine to spin. I paid for it on the website and went to bed in pretty good shape. All I had to do in the morning was call AAA, get the Dakota running, drive it to O’Reilly’s and fetch the battery.

This morning it was eight degrees and sunny. I put off going outdoors until noon. After examining the situation once again, I decided to try backing the Vibe through deep snow to the road. Who wants to talk to AAA anyway, especially when someone from Pakistan insists I have to give directions for the driver like they never use their phones. To my amazement, the little front-wheel drive fake Toyota pulled out fine because the snow was crunchy-frozen. (Once it starts to melt, there’s nothing doing.) All I had to do was go pick up the battery and install it here at home instead of in the auto parts store parking lot.

I pulled into O’Reilly’s, grabbed the battery, a terminal cleaning brush, and a packet of anti-corrosion goop and loaded up the Vibe. Before I could back out, a late-model Cadillac with a smashed-up front end missing some bits of trim pulled in beside me. The driver was a young Latina in a black leather jacket. Her daughter, about five, had on a pair of purple-colored mirror glasses, pink tights, and a turquoise jacket and looked like she was on her way. A huge decal that went all the way across the back window read “HARLEY DAVIDSON,” which I appreciated for the irony. The fine young man who sold me the battery came out to meet them and it all made sense.

Back here on the frontier, I took my own damn time and switched the batteries. Three whole hours, counting breaks. It took forever because I’m scared to death of batteries—one exploded on me once—and did I mention these weigh 50 pounds? I had to use a kitchen stool to stand on so I could lift the old one out and lower the new one in. There were clamps to clean and tools to find that someone dropped under the truck. Also the fine print on the anti-corrosion goop packet more or less said I’d die if any of it got on my skin, which it already had (how could it not), and much rubbing of hands with snow and paper towels ensued. My skin has not peeled off.

It all felt good, however. I was so confident of my work, I cleaned up all the trash and put away my tools before I even tried to start the Dodge. To my enormous satisfaction, the brand new battery spun that V-8 ten times faster than I’d ever heard it turn and a mighty roar was heard across the land. On the way home from dropping off the old battery for my 18 bucks, I stopped to buy $5 worth of lottery tickets from a Taos Pueblo grandmother at my favorite gas station. Three-hundred twenty-one million dollars would go a long way toward having a garage, you know, and maybe a new mattress.

The other thing is, I’ve decided I need a pro model Stratocaster before I die. This pleases me very much to think about and so I shall. Goodnight, and pleasant dreams.