The Day I Sold Her Wedding Rings 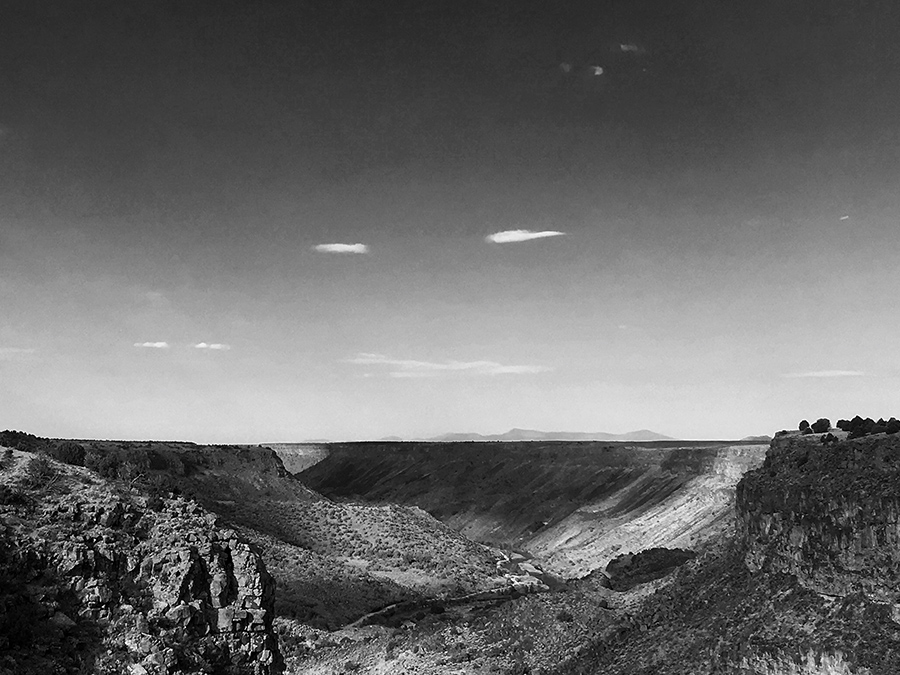 Where the Rio Pueblo meets the Rio Grande

We found them after we locked her up and I could poke around the doublewide, two silver-looking rings with diamonds. There was money, too, stuck back in her bathroom closet. Actually I think my sister found them. (I recollect we divvied up some Benjamins.) A few years ago I had the rings appraised—now there’s a racket—the understanding being that they’re worth so much but you could never sell them. See? Ninety dollars down the drain.

I’d had them longer than I’ve had her ashes in the storage unit. That makes sense. I don’t know how long she was in the “secure memory facility” but we had time to sell most everything she owned and take her money in the end just like she said we would. As trustee I kept the rings. One was her original wedding ring, a simple platinum thing with tiny diamonds in a row, the ring of choice for over 50 years. The other was a more flamboyant white gold piece with larger stones they’d bought in Germany in the 1950s. I never noticed whether she wore it too because she always found a way to stick the dagger in and all I ever cared about was getting out of there. Be that as it may the time had come.

There was a jeweler down in Santa Fe. Not a strip mall “WE BUY GOLD” kind of joint but a professional establishment in the lobby of the La Fonda Hotel. The woman I talked to on the phone even told me how to clean the rings before I brought them in. I knew she wasn’t fooling and had not the slightest doubt that they would treat me right.

We took off yesterday to make a day of it in the big city. The sun was shining and the air was cool. The 70-minute drive begins with a thousand foot drop into the canyon of the Rio Grande just south of Taos. The twisting, curvy two-lane runs along the river below scary cliffs and hills for almost twenty miles, passing the spot where falling boulders killed three riders on a Greyhound Scenicruiser in the ’90s. There aren’t many places to pass, either. Right away we ran into the road work signs. One-way traffic ahead usually means alternating convoys but all we did was sit there. Every few minutes the line would creep forward about half a car length, which made no sense to me at all, while traffic sped by unencumbered in the opposite lane for half an hour. There were rafters splashing by and making better time. I was in good spirits though, never mind I saw we might be late. My curiosity for what the hell was going on was overwhelming and the canyon is an awesome place to be.

Eventually the line began to move a little more and kept on going, ooching up to almost 15 mph. When we crept over a rise five minutes later, crammed together on a narrow shoulder 40 feet above the rapids was an entire fleet of paving machinery and trucks. Good Lord. We’d been waiting all that time for the workers to park for lunch… I could barely make out the southbound end of the line a quarter mile away. There must have been 30 vehicles in front and 100 behind. Okay, but why were we still creeping?

It was the little red Toyota in the lead. When the highway straightened out enough I saw it, followed by a pickup camper pulling a boat and several other silly people too afraid to pass. The cowards were bunched up bumper-to-bumper, leaving no room for braver souls to pull in safely if they passed and ran out of road so no one tried. For the next 15 minutes until the four-lane opened at Velarde, the herky-jerky convoy bucked and braked as everyone went mad, never topping 30 mph on a road where I go 65.

After being bottled up so long, everyone went speeding through Velarde except of course the red Toyota, still doing 35 or less but thankfully in the slow lane now. I noted the Utah license plate and awaited my turn to honk. The driver was a little old man wearing a baseball cap and he was pissed, turning to glare at me and honk right back. I wondered if he’d ever get as far as Española, where he wouldn’t even have to brake.

Velarde marks the end of the canyon. The rest of the way to Santa Fe is more developed, hilly, scenic. Mountains in the distance all around and four lanes to the end. Past Pojoaque you can even cruise at 70 mph if the traffic’s not too bad. We hit the exit for downtown Santa Fe and pulled into the parking garage on San Francisco Street with less than 10 minutes to my appointment. The La Fonda Hotel was three long blocks away through crowds of tourists. My wife hung tightly on my arm and didn’t yell about the way I dragged her down the sidewalk. God I love that woman. Finally the lobby, scores of leather chairs, and someone there to help me. Time to pee and find the jeweler. Santa Fe is like New York compared to Taos. Maybe Paris. The cool efficiency of cultured civilization was a shock but I was so relieved.

The woman I talked to on the phone was cool and confident and didn’t waste a minute. Knowing how to melt down precious metals might account for that, I thought, or maybe there’s a gun behind the counter. I told her that I’d left my appraisals in the car but that I bet she didn’t need them. (Understatement of the year.) She noted that the lesser ring was platinum and badly worn. Whatever else my mother was, she’d played her role and worn it every day with pride. There was a strength in that I’d hardly noticed when she was alive, as if the pain inflicted late in life had roots in motherhood turned upside down. Something in the observation slipped between my ribs. It’s all right, I told myself, keep going. Inside of 90 seconds later I was folding up the check to stick inside my wallet. Three hundred dollars for the two of them was more than I’d expected, fair, and probably a gift. My wife was quite elated.

We drove immediately to a favorite brewpub. I felt looser than I had in months. Sitting outdoors at “our” table up against a giant aspen in the cool bright air was marvelous. I watched the city people, ate a meatloaf sandwich on Texas toast, and got wasted on my seven percent IPA. I’m a little tipsy, I said as we walked out to the car. Oh dear, she said, and laid a smooth warm hand on my bare arm, but everything was fine.