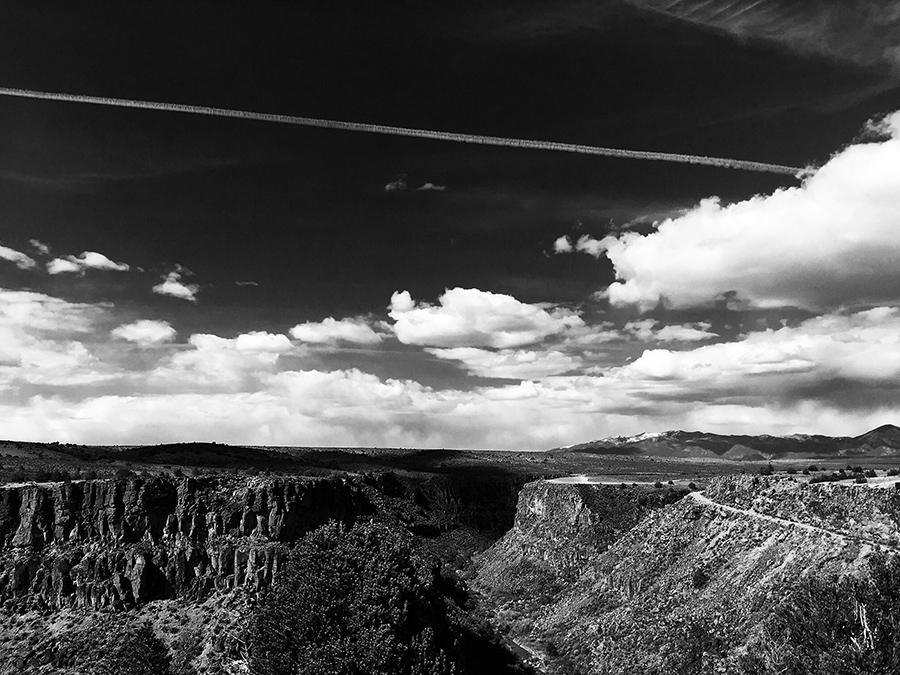 The acequia out back is running again, a sure sign of spring. I realize that doesn’t mean much to people outside of New Mexico but it’s quite the radical thing to have agua flowing thru the landscape. The technology came from the Moors, who taught the Spaniards, who came to Mexico, then here. In our case the acequia water is diverted from the Rio Grande del Rancho higher up in the hills. There are actual wetlands there because of beaver dams, cat-tails and migrating waterfowl in the freaking high desert. Every spring it blows my mind that all this comes from North Africa.

Not unrelated is the fact that many of the Spaniards who colonized Mexico were Jews fleeing the Inquisition. When the inquisitors came to Mexico City, these Spanish Jews fled north to the farthest reaches of the empire, which meant northern New Mexico… I mean, wow… Imagine having somewhere you could flee to, a place where if you made it past the Apaches and Comanches and the bears and cougars and bandits and didn’t die of thirst, you could build a house of mud, plant a little corn (learning from the local Natives) and have a life. Even before we were a country, before most white people even came to North America, this was a place of refuge and opportunity, never mind the dangers. It beckoned. Welcoming asylum seekers is in the “DNA” of the very continent, the very dirt we walk on and the air we breathe.

I have been traveling. Well, we have been traveling, but I may have gone further psycho-emotionally, since I started so far back. We just returned from Austin, for example, where we’d gone to visit with my brother before his stem cell transplants begin. I did all the driving, roughly 1,500 miles in all, intending to stay for most of the week and then changing plans after my sister and her husband came down from Dallas to join us all for one glorious day and night of reunion, visiting, and touching base. We didn’t need to be there any longer, though. He doesn’t talk that much about his feelings and I’m sure I let him down, but I think he knows my Austin time was in the glory days, when U.T. won all its football games, there were love-ins in the parks, and Austin was less than one-tenth the size it is today. Despite the many attractions of a city I still think of as my home town, I had no wish to penetrate the howling traffic any further than our comfy hotel on the southwest side. He would have driven us, of course, but I was only there for him. The time we had was wonderful, at any rate, and I’ll be back.

Seeing old haunts is tricky for the psyche. The beautiful Texas Hill Country is still something to behold, but “sand mines” for fracking wells and vanity ranches scar the landscape where I least expected. The formerly quiet two-lane country roads we took at the peak of wildflower season were like racetracks with the newer 75 mph speed limit (meaning 80 mph plus). In other parts of Texas, that’s a godsend, but every time I slowed for beauty’s sake, there was truck grill filling up the rear view mirror. I am a sensitive soul. My university years and later were so rich, so powerful, my connection to the landscape of live oak and pecan trees, clear water flowing over limestone beds, grackles squawking on the campus greens, was so direct and formative. I’ll never forget the time I stood beside a lonely back road south of town—that’s now a roaring four-lane highway—and an armadillo snuffled out from a meadow filled with bluebonnets to walk right between my legs as I stood still as stone.

I’m so aware of fleeting time, of aging. That’s one reason why I came here, leaving a settled, comfortable life and dozens of friends in Maryland 20 years ago. One life is not enough! It may be enough to learn just why one thinks that, in the agony and joy one falls through on the way. Take note and never hold back when the little voice says “go.” More than anything else, I see now how the things we tell ourselves shape everything that happens. I also think there isn’t any need to “get” this until we’ve been washed downstream for several lifetimes.

Make of that what you will, and welcome the expanding light.