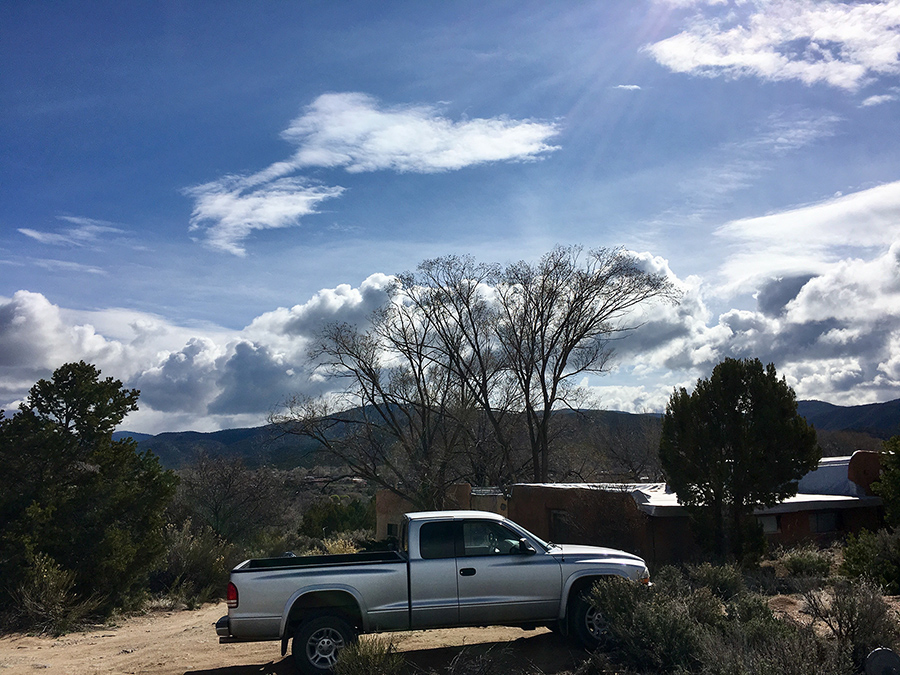 It wasn’t me that did it. Then again, maybe it was. The forecast called for all-day clouds and highs in the forties. The sky was gray, and I decided to blow off doing laundry. No dryer, so we have to hang it all outside or by the wood stove anyway. Then an hour ago, shazam. It’s now 11:03 a.m. with the entire day opened up and free except for income taxes. That’s why I’m still here beside the fire eating and typing, obviously.

We’ve had a few hard days recently. Sometimes I hear that spoken softly when I wake up in the morning, “It’s so hard…” It is, it’s way too goddamn hard. Our lifestyle, life on the frontier, the nation… Pushing against the difficulty only seems to strengthen it, too much can’t, where, how, and when. My brain is an incomprehensible gift, a cosmic machine that came with no directions. Perfect excuse for idiots. The other day I read about projecting thought. Now this is something very different, clear and simple like a pencil. What you want is a tool. The medicine is we are loved and make things with our minds. Last night I pushed this in a certain way. When I went to bed, I had the greatest dreams.

After just an hour under, I woke up breathing fast and crazy. There’d been a dream, a good one, but that was all I recollected, feeling something like on Christmas Eve when everyone believed in Santa Claus. What the hell was that, I wondered, then fell right back to sleep. I dreamed about my brother Bill, who died of meth and cancer screaming in a V.A. hospice. (That was real and this was in a dream.) He was sleeping in a truck cab with a bunch of other folks but got up and sat down with me. We were at a picnic table. I reached out and held my hand against his face, something I never would have done in real life, and told him that I loved him. The next thing was, he gave me a ride to someplace I was going. (He has a car?) We were driving down something like an Interstate and I remembered that I’d left my car back wherever I had found him. As I was working up to asking him to turn around, the scene changed.

I was visiting our old home back in Maryland, the one we loved so much and haven’t been able to equal out here in the West. It was apparently for sale. I walked out in the yard to where current satellite views show the real-life owners let a small forest grow up over the septic drainage field—not really good—but in the dream, they’d cut the trees down and opened up the view again to make the property more attractive. I approved. The dreamtime owner was tall and muscular and showed me an amazing boat he’d parked out front to pull potential buyers in. It was a replica of a famous apocryphal craft from a movie that never was, and when I told him souvenir hunters would strip it bare, he suddenly got worried. I paid no attention and was conscious in the dream, wondering if I’d want to move back if we could buy it… The prospect wasn’t awful. We’d just stay there forever and I nevermore would roam. I’d go sailing in the sun and mow the grass and that would just be it. Hey-ho.

Naturally the first thing I did when I got up and went online was check to see if that same house was actually for sale. It wasn’t, but I did see that Zillow and the rest assigned a value to it that was less than anything we’d seen in Taos in over twenty years! If it were for sale in real life, we could buy it, no problemo. Not that this is high on anybody’s list—you can’t go back, remember—but the scent of possibility was in the air inside the dream, the message bouncing off my exercise the night before. Dream objects are mostly symbols, anyway. It’s what they connote that’s important, not the thing itself. So family healing, reconciliation with the past, and a green light for the present. My brother rising from the dead to help me, though I have to go back and drive myself, and a way that we two in New Mexico can thrive and be here, right now, in the moment.

Won’t say what I thought of, but you probably can guess.