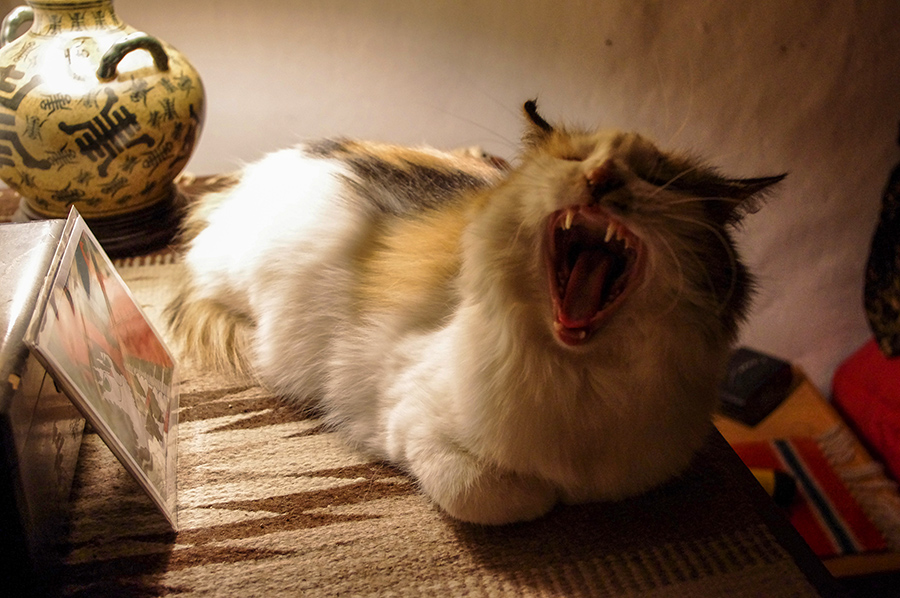 FYI: I’ve been dealing with a mouse tonight, so I decided to post this edited chapter from my Taos Soul book. Same cat now, just not as deadly. – JHF

“Are you okay?” I shouted from the bathroom. (I was not in a position to render assistance.)

“Yes… but THERE’S A MOUSE IN MY PURSE!” she yelled back from the living room. Just at that moment there was a loud rumble of thunder: the afternoon storms were making their appearance. “I’ve got to go get the clothes!” I heard her say, and then the screen door slam as she hurried down to our clothesline by the acequia.

It’s a good thing I couldn’t hurry anyway, because the moment demanded savoring: it was the first time in my life I’d heard those words from anyone, and it would probably be the last. A mouse in her purse? A real, live mouse?

When I got to the living room, she was still outside grabbing the laundry off the line. There was her big red purse sitting open on the low banco next to the table, and everything looked normal. I
peered cautiously inside: nope, couldn’t see a thing except the usual wallet, keys, eyeglass cases, cell phone, makeup kit, Kleenex, and Lord knows what. Nothing in there to make a lady scream, certainly. Just then Callie the Wonder Cat wandered into the next room looking bored. AHA! I thought, I’ll see what she can do. In my experience this never works, cats not liking direction of any kind, but these are not normal times. I quietly eased over and scooped up the cat. Supporting her weight and holding her firmly by her hindquarters, I walked her over to the purse and poked her nose inside: instantly it was as if something had grabbed her head and wouldn’t let go!

I still couldn’t see anything to be excited about, but I set her all the way down on the banco and stepped back. Her head never lifted out of the purse. She sniffed here and there, then batted the outside of the purse rapidly on both sides, something I’ve never seen a cat do—a ruse to spook the prey, of course. All of a sudden, she reached way down inside the purse, and WHOOSH flipped a BIG FREAKING MOUSE six feet in the air. The mouse landed and shot for the other side of the room, running right between my legs, but Callie was faster: WHAM, grab, got it! She moved so fast, I literally didn’t see her. There she was, though, with the doomed mouse clenched trembling in her jaws.

“You wanna go outside with that?” I asked, opening the screen door. Of course she did, and I went after, intending to snatch the victim away like I usually do if I can. She wasn’t having any of that this time, however, growling menacingly and biting down even harder on the squirming mouse. I could have gripped her by the scruff of her neck and shaken it loose, but I also felt like she had earned it this time, so I let her go.

In less than 90 seconds, she was back at the screen door licking her lips, waiting to be let inside. I did so, and half a second later, along came my honey with the clothes. (Let me tell you, if you ever want to make a woman really grateful, just get a live mouse out of her purse.) The questions remain, however: where did the little bugger come from, and how long had he been in there?

That’s bringing a knife to a gunfight.