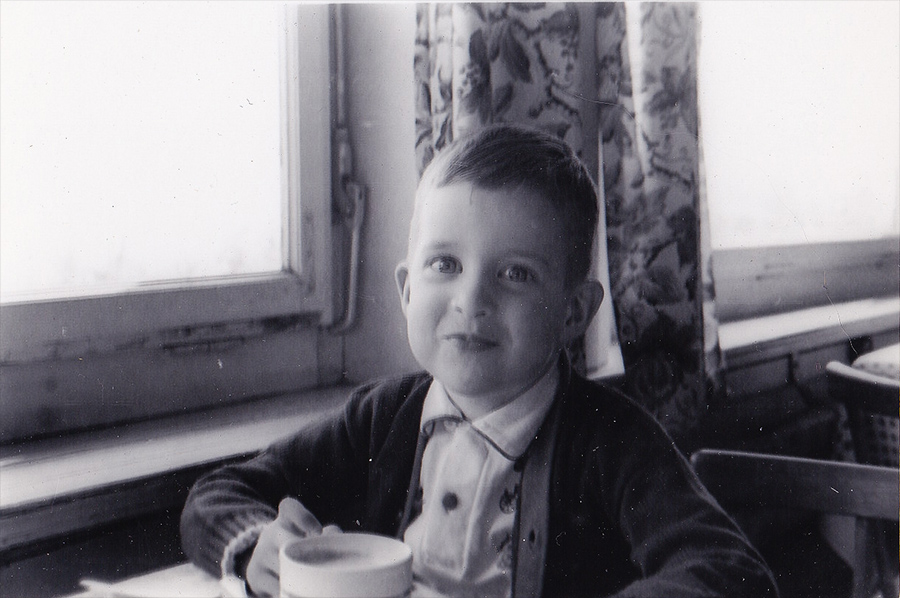 Bill in Germany around age four, a long, long time ago

Oh yes, I watched that debate. As I tweeted to someone, “I’ve never seen anything like that in my entire life!” It’s relevant to this post, but that comes later. This is all about my brother Bill. Someday I’ll write the book about my family that will end all family histories—no one will even try to write another. The chapters on my brother Bill will be among the saddest and most infuriating things that anyone has ever seen, and this just a taste.

He was born at Andrews Air Force Base in Washington, D.C. on May 16, 1951 and tried to come out while our mother was still lying on a gurney in the elevator. Typical, I’d say, and things pretty much went downhill from there. She felt guilty her entire life because the doctor had to grab him with the forceps when he got all tangled up inside, thinking maybe that was why he had such “problems” later on in life. As the middle child, everything about him was impossible. He’d draw you into situations where you’d have to treat him horribly, and mostly everybody did. When he was still the youngest, pedaling furiously on his trike to follow me on my new bike with training wheels, I’d urge my friends to ride so fast he couldn’t keep up. That was what you did with Bill. There was just something about him that wasn’t right. When Dad was stationed in Germany and we lived outside of Frankfurt at Rhein-Main AFB, he’d sneak into the closet to pee in my shoes, or break my model airplanes. Our father didn’t know what to do with him—or any of us, really—though I often heard him recite these opening lines from a poem by Eugene Field:

And then he’d cry a little, wipe his eyes and turn away. That was as emotional as the old man would ever get, except when he was drunk or angry, and the recitation always baffled us. What was it all about with Bill, and why pick out the misbehaving klutz who barely got through elementary school?

One time he stuck a dried lima bean inside his ear and tried to get it out with soap and water. The bean expanded—naturally—and hurt like hell. Our parents took him to the emergency room so someone could dig it out. In high school things got uglier. According to rumors from family therapy that I was not a party to, he may have assaulted an older lady who lived across the street in Houston (sexually or otherwise), and there might have been some incest. Somehow he graduated and made it to the Air Force. In Korea he “married” a prostitute who promptly vanished with his money and a new ID, and he took it pretty hard. We all knew what had happened, but what was there to say? I visited him later in San Angelo, TX where he was stationed. There were bricks of marijuana in full view on a table where he was filling baggies to sell to other airmen. All of this was right out in the open in his quarters—he didn’t even close the door! Around this time he bought a new Volkswagen “Thing” (a Jeep-like vehicle) and promptly wrecked it. Soon afterwards, the police found him naked and pistol-whipped after a drug deal gone bad, and the Air Force let him go—honorably, as it turned out, whether blind or kind or accidental, and he was proud of that.

By that time my parents had ended up in Tucson, and William George (his full name) tagged along. This isn’t the time or place to lay out everything that happened afterwards, but it’s the saddest, most awful tale of family dysfunction, drug abuse, and chaos I have ever known. At one point he let someone build a meth lab on his property, behind a trailer that our parents bought for him so he would have a place to live. He barely stayed out of jail by ratting on his associates, who later burned the trailer down. Some time after that, he drove his poor old car out into the desert on the rims, where my sister found him living in a cardboard box. There’s more and more, there’s so much more. The meth. The crimes. The sexual creepiness and drug-induced aggression. Oh God, it was unending. He died of cancer at the V.A. hospital in Tucson last year, raving and eating his own dead flesh, and everyone was glad we didn’t have to worry about William any more.

And yet, and yet…

When he was straight, he wouldn’t hurt you. He was empathic and considerate. He had a strong creative streak and built sculptures out of junk and piled-up rocks. Always an eager participant in grownup family activities, such as there were, he fit in fine and had a sense of humor. He had at least a few friends who remembered when he’d been generous and helped them. When all is said and done, despite the lifelong horror and the pain, I’d stand up and say to anyone, “My brother had a good heart. Deep down inside, a good, good heart.” That doesn’t mean we had it easy with him, but he did.

This last part may sound shocking, even inexplicable or crazy after all I’ve written here, but I don’t care. It’s what I really feel. As I caught up on the news this morning, having watched that ugly performance last night by the soulless man who would be king, out of the blue I thought of Bill! Yes, that surprised me. But whatever spark of pride there may be in my DNA awakened and made me want to tell him this: Wherever you are, William G., you’re a better man than Donald Trump.

(Somewhere in the void, a circle is completed.)

Rave on, brother. Rave on.