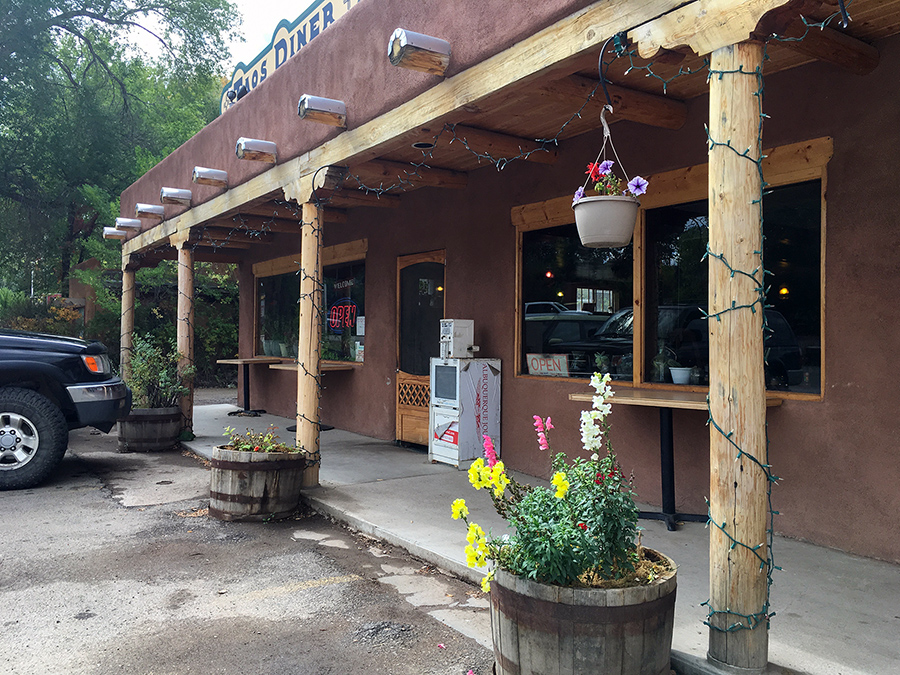 First of all, that’s a photo of the original northside Taos Diner that has nothing to do with this post, though they’d have no trouble with the title. It’s definitely a state of Taos mind. You won’t find any tourists there. (We will beat you with our hippie sticks.)* It’s also close to the Famous Goddamn Storage Unit, so we often stop there for a treat whenever we’ve come from digging through the dusty boxes for some essential thing. It happened again a few days ago—her long black cotton pants weren’t there, but I found my mother’s ashes—and we split a big ole sweet roll. My wife couldn’t finish her half and took it home. That was fine, but she’d probably rather have had the pants.

The day just past was something of its own black hole. It started with so little water pressure that we almost didn’t do a laundry, but the washer filled eventually and that was fine. We live on a community water system. I’d never encountered anything like these before New Mexico. In defense of ours, the water doesn’t cut off any more often than the power does, say several times a month. About the time my wife came back into the house from hanging up the clothes, I discovered it was off again. Suddenly no way to clean your face, wash your hands, shower, bathe, flush, or have a glass of water at the onset of a busy day, which soon became a frame of being sane men should avoid. Usually when the water conks out, it’s only for a short time, but this was Saturday. Who works on Saturday? The outage stretched on into the morning, afternoon, and early evening. There hadn’t been a warning of any kind. We live within sight of the local water towers where the wells and pumps are, but not a truck came rumbling by all day.

By a little after noon I couldn’t take it any more and called the home phone of the president of the local water association. He wasn’t there, but I politely asked his wife if she knew when the water would be back on. She reacted like I was the fiftieth caller. I could have been, but I don’t think so.

I wasn’t expecting a real answer, of course. Just reassurance that they knew and that someone was on the job. Her reply was neither, especially since it turned out that the number didn’t work because his phone was turned off! For all I knew, everyone was in the mountains hunting weasels. By this time my wife was hiding under a blanket. I’d chosen to argue in favor of filling up a five-gallon jug in town—she thought this was much too heavy—in addition to the gallon we’d already gotten from a neighbor, and it wasn’t going well. I called the association president’s house again and this time left a message that was less than brilliant and the man will not forget. The answering machine sounded like an old cassette device, so maybe the tape broke at the end. That would be nice, wouldn’t it? Finally, a little after dark, the kitchen faucet started spitting and a little water trickled in. Not before we had driven off to fill the great big huge thing and fetch a chamber pot (no, really) from a closet at her studio, but we were saved.

That is, if “saved” even need apply. [For more on shifting internal gears, see the “New Mexico Slow” chapter from my first book, Buffalo Lights.] The truth is:

• My neighbors might have been upset but know the water always comes back on. I spoke to one who might as well have been commenting on the weather.

• Their parents can probably remember when there wasn’t any.

• No one but me thinks the association is out to get them.

• None of them freak out.

There are things that one should never push against. To that end, and the necessity of understanding, we are living in the perfect place. New Mexico will beat you to the ground if you stay stupid. Meanwhile, not only did I make a total asshole of myself, we have to keep on living here until the gods say we can move. Although I try to focus entirely on that—in expectation of a new direction!—I’ll likely take another karmic hit. It’s all a blur to me these days, but at least I got my hair cut and don’t look like Cheeto Jesus’ stupid doctor any more.

* This strikes me as funny for some reason. However, rest assured that the Taos Diner is a fantastic place to eat (real Taos) and everyone is welcome!