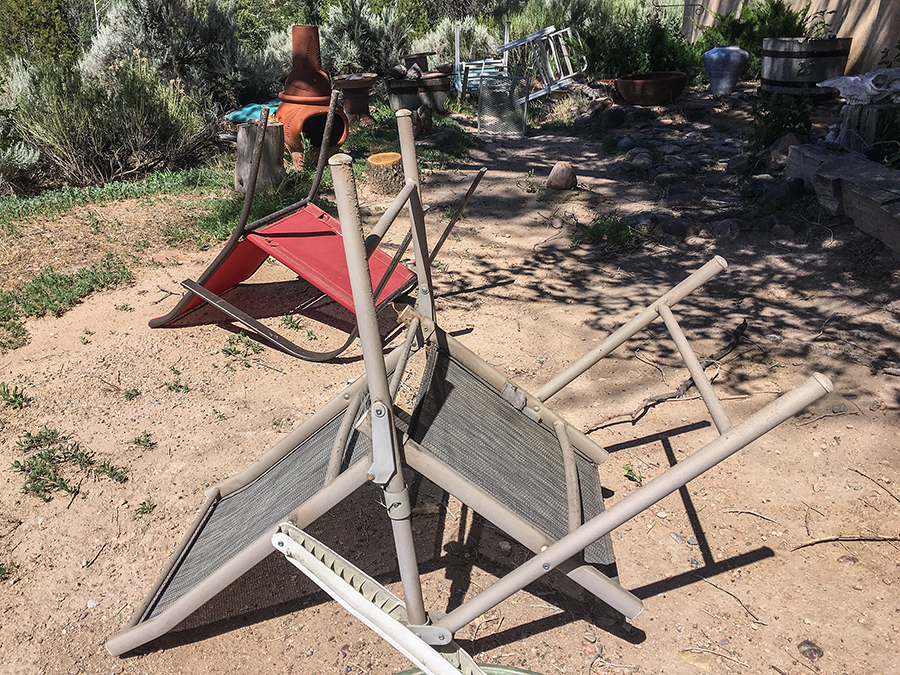 The nerve of that wind

It’s been a brilliant summer so far. If I didn’t wander outside of this chilly (!) adobe, I’d never know it was almost ninety degrees outside. It never gets above seventy in here. Hell, it never gets to seventy, except in the winter when I have the wood stove cranking. Just thinking about that gives me the willies. We gotta get out of this place, you know. Winter. This place. Hoowee, chilluns! Thank God I have a new approach. (I do?)

Anyway, just look at what two seconds of wind accomplished. It was a fine breezy afternoon and then kaboom. It could have been a dust devil. It could have been a zephyr. Ha-ha, zephyr: “A soft gentle breeze.” I call them zephyrs, anyway, these out-of-nowhere blasts that blow the lawn chairs into the sagebrush. Just two seconds, mind you. A bunch of rakes and stuff fell over, too.

Meanwhile, I may have mentioned a perfect house we didn’t score. That was because after we decided to give it a shot, our buyer’s agent learned that we only had eighteen hours to submit a bid and that there were two other buyers ahead of us who would probably offer close to the asking price—which I was hoping to aim well south of. I had no idea Fannie Mae foreclosures worked like that and didn’t like being pushed. In any case, we couldn’t move that fast. I’ve kept my eye on it, though, and we’ve had fun pretending that we own it.

Then kaboom again. Yesterday morning it “fell out of contract,” and I got busy. Our buyer’s agent made some calls. I was figuring what we could pay. My wife was trying to pay attention, but one of her oldest friends had died in Maryland and you know how that goes. A little tension there, but in the end it didn’t matter. After lunch we learned that the property was still under contract after all, but to the second buyer who’d submitted a bid before the invisible deadline several weeks ago. Well, damn. Another swoosh and whoop and put the chairs back up the way they go.

I didn’t even have time to start worrying. Onward!