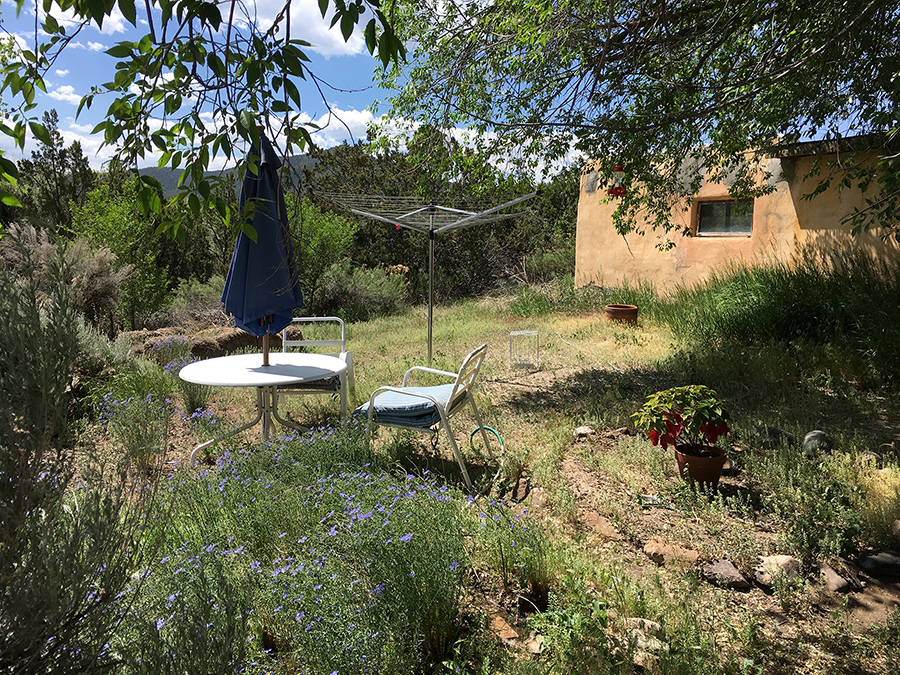 That’s a little piece of the back yard. This is the semi-civilized area, the rest being sagebrush, chamisa, and cactus, but you still have to watch out for the goddamn ants. Man, if ants were money, I’d be rich, assuming I could wrangle them. The only way to sit at that table is with your feet up on the legs, which mostly works.

Those blue flax flowers in the foreground look pretty good, don’t they? They ought to. I think when I took this picture, it was in the middle of a three- or four-day accidental watering period. In fact, you can see a little water there. I didn’t notice when I was back there with my iPhone. That’s because the Llano Quemado Water Association had just replaced the pumps at the water towers just across the road and there was hardly any pressure. We weren’t able to take showers for a week. It took twenty minutes to get a little water in the bathtub! What I’m saying is that even though I forgot to turn the water off that first evening, there wasn’t exactly a torrent coming out of that hose, and it was running so quietly that no one heard it. Another factor is that due to the amazing geology and soils of New Mexico, a hose can run at lowish volume right into the ground and never make a puddle. I mean, never. Depends on where you’re talking about, but certainly the case right here. Who knows where the water goes? “Something to do with exploded volcanoes and tectonic plates,” they whispered near the entrance of the cave. Or maybe just because it’s dry beyond imagining.

Fortunately, our dear dead landlord donated the land for the water towers to the association several decades ago, with the proviso that he never had to pay for water as long as he lived. The property has been locked in probate for six or seven years, and we’ve never paid. It doesn’t make sense, but one tries not to talk. Either the probate process is keeping the old guy alive, so to speak, or the association’s just being polite, but my extended watering of uncharted caverns won’t cost us a cent.

They’re watching us, though. I broke radio silence and called the association to find out what the deal was with the low water pressure. The number I’d found rang the president at home—ouch—but I barreled on through. At this point, we may be the only Anglos in the immediate neighborhood, so he knew right away where I was: “You live in the Blair houses, right?”

The house where the dead man got free water.