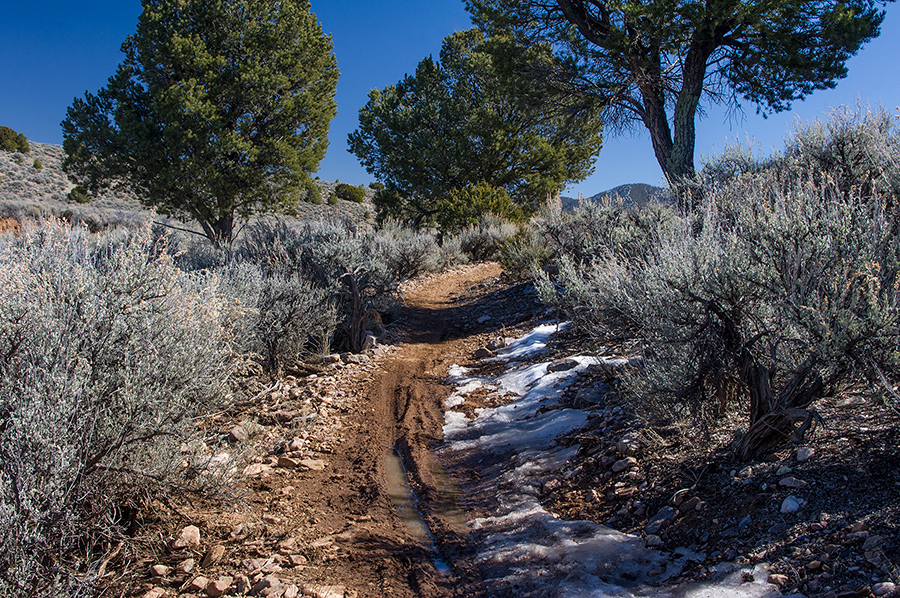 Two hours on this trail. I met one other person.

The glorious false (?) mid-April weather continues! We’re running fifteen to twenty degrees above average and have been for some time. There are stirrings in the natural world. Ravens are building nests. The big black carpenter ants have awakened from their winter slumber in the rotten vigas and sent scouts into the kitchen. I heard a horsefly on my hike two days ago. Also on the hike and for the sake of research, I smacked a juniper branch with my walking stick to see if I could shake some pollen loose. “Don’t ever do this” would be good advice, but how else was I to learn? I saw no pollen, by the way, but did notice that the tree smelled rank, corrosive, major ugly, and I had to blow my nose for hours afterwards.

On the housing front, we recently looked at a home for sale just a few blocks from the Plaza. Technically it cost too much, but our buyer’s agent read my mind and suggested a savage path to at least a twenty percent haircut. I liked the sound of that, so he and I had a good time searching for washer/dryer hookups that apparently don’t exist while my wife played “what would go in here,” and then we all looked around some more. There were oddly flexible wooden floors beneath the carpet. The appliances were fifty years old. All the window glass was single-pane. The giant forced air heating ducts reminded me of old Midwestern houses from the ’40s, although for what this cost, you could buy half a dozen of those. All that said, it was cute and the location was to die for, but after everything that we’ve been through, we deserve to be able to wash our clothes at home. Come on.

Yesterday we entertained visitors from Wisconsin, my wife’s cousin and spouse, who remarked sagaciously how baffling the “lack of pavement” was. That they noticed did impress me. The reference in this case was to certain downtown streets and parking lots. Yes, downtown. We’re kind of used to that by now, but this is another reason why driving out of state—to Colorado, say–is often shocking. Sidewalks! Asphalt! Not the water-soluble variety employed in Taos County, either. So much of what pavement there is in Taos looks like it’s been attacked by jackhammer-wielding vandals. Maybe it’s a marketing thing. You know, we’re all so edgy and so tough, like visiting Texans who won’t brush the snow off their big shiny trucks.

Taos is such a weird, weird place. If only I didn’t fit in and love the wilderness.