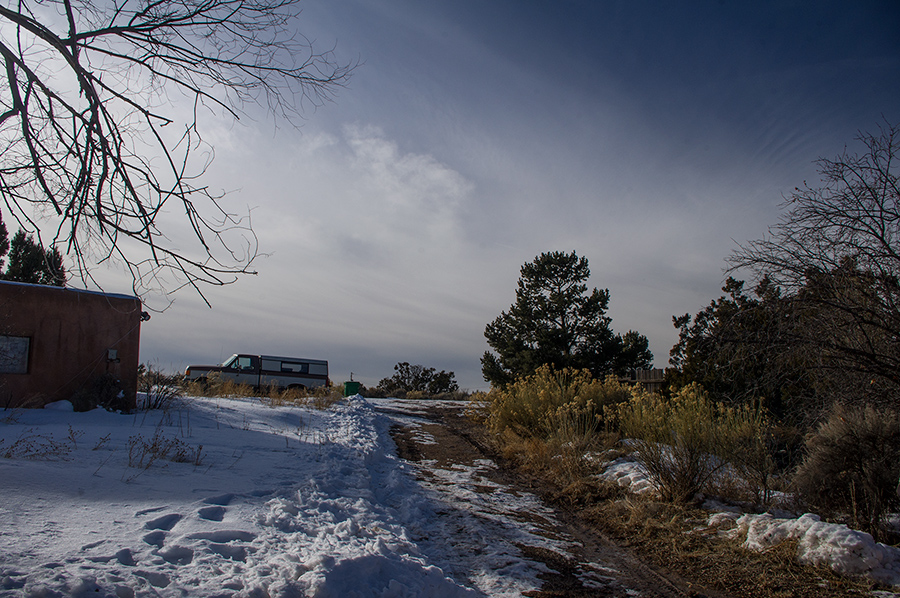 Not so bad now but deeper than it looks

Oh the winter, oh the winter hell! I’d rather not recall exactly when it snowed. Around Christmas, I think. There were two storms. Between them they covered the ground in town ten inches thick. Out here in the hills, the snow lay two feet deep among the sagebrush and the trees. And then the cold set in, down to zero every night, and never rose to freezing in the sunny days. The snow became the land and nothing melted, save for just enough to hang long spikes of ice along the roof—otherwise, the world of white was permanent.

At first I did the usual chores. I cleared the doorway and shoveled paths: up the driveway to the road, around the car, and to the places where I fed the birds. The wood pile was another matter, smaller than it should have been and covered with an old blue tarp. I struggled to expose the wood. The snow was impossible to remove except by grasping the edges of the tarp and heaving with all my might. I couldn’t see how much wood was left and didn’t want to. Until I cleared a truck-sized path, there wasn’t any way to order more.

In the meantime, life went on, or tried to. For several days we couldn’t back the car out to the snow-packed road the county never plows. Each attempt resulted in my getting stuck again in different places, one time in the road. My wife would watch my progress from the kitchen window, shake her head, and plan how we would get by one more day without fresh groceries and what appointments she would have to cancel. Because the wood was low, I forbade drying laundry by the stove because that used more fuel. The clothes piled up, the tension grew.

Each day I shoveled more snow from the driveway. At first the work was fun, though tinged with worry. Digging in the quiet sunny days, I pushed until I hurt, then clomped back to the house. Soon I judged I’d cleared enough for Tommy’s wood truck and called him for a load. “Monday or Tuesday,” he told me while I winced. There wasn’t wood enough to last until then, but I made it work. Over by the neighbors’ fence there were some old pine slabs with bark attached. I stumbled through the drifts to drag them back and smashed them with a splitting maul.

There were other sacrifices. The top of the useless compost bin, some decorative short rounds, the pitch wood I’d been saving. Tuesday came and went and Tommy never showed. I called and left a message. The packed snow at the top of the driveway had turned to solid ice, but I hoped that he could make it. By this time we were driving in and out and only sometimes getting stuck. I spread wood ashes on the worst parts and worried about broken bones.

Tommy had simply vanished. I finally called another wood man, someone I’d never used. He had a good price on straight piñon instead of the green mixed wood that Tommy sold but couldn’t come until “Sunday afternoon or Monday morning.” I told him I would take it, anyway—if Tommy ever did show up, we’d have a full two cords. By this time I wasn’t sleeping well at night, waking up in fear of freezing in the old adobe while I wondered why no one would bring me any wood. I fell into a horrible depression. My past life choices mocked me as they shuffled by. My Iowa-raised wife was tough and optimistic, but my deadly moods were poison. She yelled at me to wake up, shape up, and find us another house! This was mostly positive, but she had hit the wall. I was locked up tense with rage and beating up on myself. It was just our road and driveway, too, this house, and one too many seasons in a place we never thought we’d be this long. The worst thing was, a quarter of a mile away, everything was normal.

I don’t know how I kept the fire going. I rationed sticks, filled paper sacks with scraps. I chopped fragments off of elm stumps. All the while I kept on shoveling to clear more snow and ice. The weather was sunny but still freezing. At night the temperature dropped to teens or single digits. The gas wall heater in the living room ran constantly.

“By noon tomorrow, for sure!”

That meant that he and the new man might show up together. I wondered how I’d deal with that, but thank God, we were saved! That night we went out to our favorite restaurant in an fine adobe mansion full of tourists from another world. The next morning I burned all the scraps, and neither of them came. I went into extreme survival mode and hacked an old elm chopping block small enough to wrestle into the stove. Miraculously, it burned, and the hours ticked away. That night I almost slept. Monday was a holiday. Tommy might come through, and I had the promise of piñon.

Martin Luther King Day was a cold one. I got up to microwave half a cup of coffee I’d left out on the counter overnight, and something I hadn’t added went down when I took a gulp. Probably a box elder bug, I thought. The damn things were all over the kitchen. They hibernate in crannies and wake up fooled when sunlight warms the window frames.

I sat down by the useless stove and hated everyone on Earth. All was failure and injustice. Why had Tommy promised to show up by Sunday noon? What had happened to the new guy? How was it that I had money but no heat? The indestructible love of my life was close to breaking. It was the worst week I remembered in our sixteen years in Taos, I decided, conveniently forgetting when she drove off for Dubuque for however long it was—a couple years, I think, with breaks— and left me crying in the driveway with the cat. (That was for a job and to help take care of her mother, but I was inconsolable.)

The morning passed without a phone call or a wood delivery from either source. I held out hope until half-past twelve and called the piñon seller:

“Something came up. I’ll be there tomorrow morning.”

He sounded like he meant it. What was I to say but fine? The next thing was to see if I could get ahold of Tommy. I did.

“Oh, uh, I’m working on your load right now. Gotta split some more and stack it. I’ll be there this afternoon.”

The thing that had to happen might. I held back the last two hunks of burnable wood I had and waited several hours more. An hour before sunset, there he was. I knew it had taken this long because he wasn’t really working on my load before I called him. I also knew he was a good man and there had to be a reason.

Tommy is an archetypal local Hispano who grew up half a mile away. He’s heavy, bearded, beat-up, with a braided gray ponytail that hangs way down his back. His voice is low and gravelly. He starts his truck with a T-handle screwdriver. His wife had come along to help unload.

“Sorry I couldn’t get here sooner,” he said. “I’ve been delivering wood to the elders at the Pueblo. They only buy a row at a time for thirty dollars. Just one row that fits across the front of the house. They won’t take more because they’re afraid someone will steal it. Some of them are old women who wait to call me at the last minute, and when I say I’m busy, they say, ‘But I have to have it now…’ ”

He was speaking of the older people living near the plaza. By design and Native belief, those quarters have no electricity or plumbing. The residents haul their water from the Rio Pueblo fifty yards away. Thirty dollars for a “row” of wood that doesn’t last long in snow and cold like we’d been having. He must have had to make a run out there at least every other day. Something also tells me not everyone pays thirty dollars, either.

The next day I got my piñon, a righteous load that calmed me down. The new guy is bad-ass smart and capable. Now there are two full cords of wood in one gigantic pile, so I’ll let Tommy have a rest. If only I could do the same with the evil in my soul.