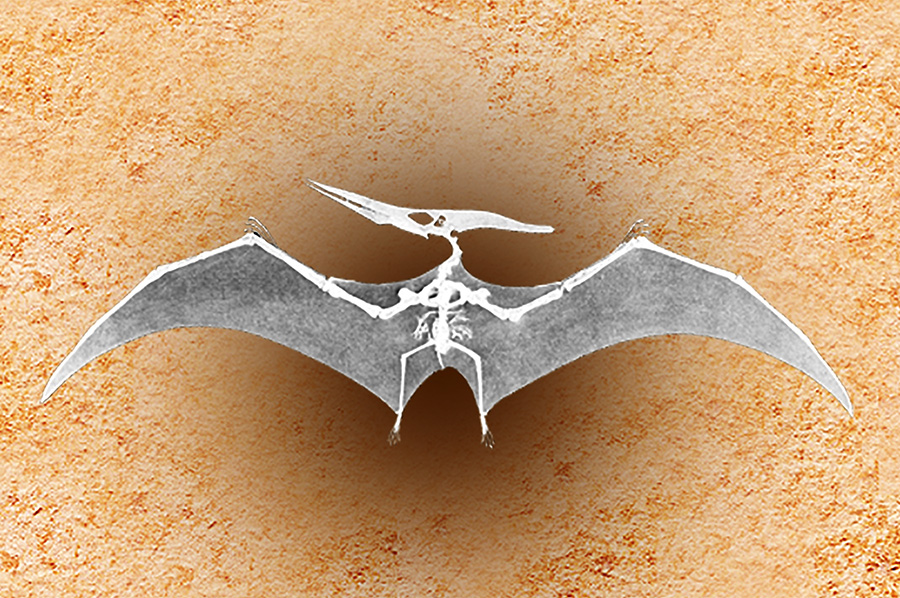 This is your brain on puckey fruit

FOR BEHOLD, something completely different. This is an excerpt from a “rock & roll science fiction” novel I haven’t touched in over a year. What follows is part of what Anne Lamott calls the all-important “shitty first draft,” posted here temporarily to get my juices flowing one way or the other. The main character drives a wretched ’57 Mercury, a wisecracking genetically-altered Rhamphorhynchus pops up at the end, and everybody must get stoned. Enjoy until I take it down! – JHF

Above the darkened land they flew, almost silently, their long gray-white wings moving in slow cadence. A tall volcano in the distance spewed glowing ash above a thin layer of clouds that flickered pink and orange from the blasts. Down below a ribbon of water flowed through dense green forests on the way to a vast grassy plain. Between the fliers and the ground at lower altitudes, smaller nocturnal airborne creatures criss-crossed singly and in groups as stars glittered above them in the heavens. The night sky was full of life of all kinds, as was the daytime blue.

The great beasts with crested heads and long pointed beaks turned slowly south and glided lower as they approached a coastline glistening in reflected moonlight. Drawing closer together in formation, the dozen reptiles aimed for a circular patch of sky that shimmered faintly golden over an ocean where no ships sailed. Shifting into single file, they flew through the portal with a crackle and a flash and disappeared, leaving only the hissing sound of distant surf behind.

The other creatures went about their business, on their way to daytime roosts in caves and canyons in faraway mountains, or in tall trees along the margins of the open spaces, where they fed on lesser prey in shrieking flocks throughout the night. In the daylight, others took their places in the air or running on the ground. Some moved slowly in the ancient forests or plodded in the marshes by the river and the coast. Day or night, everywhere was gnashing, bawling life and death in an undulating carpet from horizon to horizon, shaken constantly by surging Nature and migrating predators.

In an certain corner of the blue-black night, a tiny spot of light glowed brighter than surrounding stars. A thousand miles away, other gray-white fliers with folded wings stood erect atop a flattened mountain peak and watched with eyes betraying no emotion. For some time now they had gathered and observed the growing speck. No aftermath escaped their recognition, as they’d already lived it. One hundred million years into the future, another mountain glistened in the morning sun and pebbles shifted underfoot. They noted this the way they noted everything that came and went, including the small black car that followed Jaxon Bat.

For them the world was ever just beginning. They moved through time like water and lived everywhere at once, acting purely out of instinct. They were capable of thought but had transcended that dull need and rarely used it. Once upon a time they’d forced their will onto another species for a purpose long extinct and moved on. The subjects of this accidental evolution carried on the best they could under blue Southwestern skies, tethered to the single mind that flickered through the eons and gave sight beyond the veil…

The morning sun was strong above what had to be at least eight thousand feet. The warmth made all the difference, and Jaxon had the window down. The Merc was running like an old car should, the engine drinking hot dirty oil while the wheels stayed on and didn’t shake too much. The mostly-straight road ran along a sagebrush plain that paralleled a massive wall of snow-capped mountains to the east. According the the directions the Kid spat out before his phone went dead, there should be a curve ahead that led up to a pass. That’s where Jaxon would see an unmarked road that led off to a little canyon and a cabin where he’d find the Kid.

Jaxon slouched a little lower in the seat and yawned. There was hardly any traffic. He checked the rear-view mirror: nothing but a small black car, hanging back about a quarter of a mile. Wasn’t that the same one he’d seen before he left New Mexico? Too small to be a cop, but what if the Kid was right and he had reason to worry about being followed?

The highway dropped into a dip where a broad arroyo crossed the road. Jaxon hit the brakes and pulled onto the shoulder, bringing the Merc to a grinding stop in a cloud of dust and flying gravel. Jamming the shifter into reverse, he stomped on the gas and spun the wheel to the left, heading the Turnpike Cruiser for the opposite ditch. A screeching stop, a yank back into Drive, and Jaxon spun the wheel the other way and hit the gas again. Before the black car had a chance to crest the rise, he’d turned 180° and was roaring back the way he’d come. A few seconds later, the black car zoomed by close enough for him to get a decent look: a dirty Chevy Cobalt driven by an ugly midget!

Oh holy fuck. Not a threat, at any rate.

Jaxon slowed down nice and easy this time, so he could turn around respectably where the shoulder widened beside a ranch gate by a mailbox pocked with rusty bullet holes. As long as I’m stopped, he thought, I might as well have another toke. Jaxon patted his pockets for the lighter, found it, fired up his pipe, and exhaled slowly as he scanned the scene. All was quiet, except for a raven croaking softly on a telephone pole. The Kid had better have some grub, dammit. As if in answer, the raven squawked and plopped a blob of raven shit. Easy for you to say, you garbage-eating shaman faker.

Jaxon dropped the pipe and lighter into his shirt pocket and eased the Merc back onto the asphalt. Thirty seconds later, he reached the dip: there was the dirty Cobalt and the midget—wearing a gimme cap, Jaxon could see—waiting on the side of the road. Better settle this right now.

He pulled over smoothly just beyond the other car, got out, and walked back slowly to the Chevy, as befit a Western howdy-do. Oddly, the windows were now rolled up and impossible to see through with the heavy tint.

“Hey!” he called out. “Everything all right? Do you need any help?”

There was no sound or response.

No one stirred except a horned toad that skittered off into the sagebrush. Just then the Chevy started up, but still no answer. This was not what he expected.

“Wait a minute, I want to ask you something!”

The Chevy began backing up and left him standing there.

Jaxon started walking toward the car, which sped up with a roar, still in reverse. He broke into a run. The Chevy—moving much too fast—turned too quickly to the right, came around 90° and flipped once, hard, almost going over twice, then fell back on its wheels with a crash as the driver’s door fell off.

There was hissing from a busted tire. A rolling wheel cover spiraled wonka-wonka to a stop.

He was coughing from the dust but still couldn’t see. Jaxon tried to cover his nose. A breeze came up from the west and the air began to clear.

Jaxon was undone: still strapped in its seat atop a booster cushion and grinning up at him, wearing a baseball hat and sunglasses, was a four and a half foot tall winged reptile with long sharp teeth!

And then the lights went out.