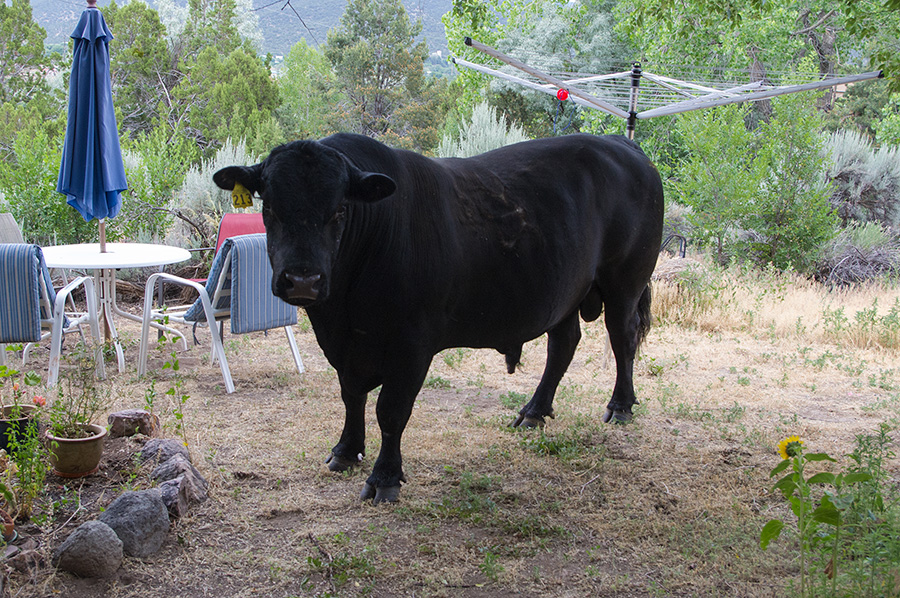 You really had to be there »Buy This Photo!«

The sharp, loud scream from my wife in the kitchen startled me out of a delicious slumber at 7:00 a.m. “Are you all right?” I yelled, staggering out of bed. (Cue visions of sharp knives, rattlesnakes, dead cats, and blood…) She was, fortunately, but something huge had just walked past the window: this guy!

I couldn’t believe it. Not again! (See here.) I was naked this time, too, just like fourteen years ago in San Cristobal. The big black bull had come around the house and was now standing in the back yard eating flowers. “Shoo!” I yelled. Nothing. He just stood there looking at me through the screen door to the bedroom. Bulls generally don’t react to “shoo,” of course. Then I had the good sense to call for my camera. 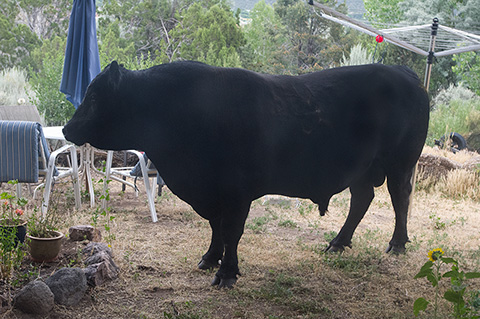 Believe me, the photo doesn’t do him justice

She did. After snapping a few choice photos, I tried to chase him away again. “Shoo! Git! Go home!” But nothing worked. Finally I opened the door, still in my birthday suit, and yelled again. The sight was too much for him, apparently, and this time he took his leave—slowly, I might add. I wonder what might have happened if he’d charged me, though? Would there now be a full-grown bull wedged into the doorway, or better yet, inside the house?

This simply cannot happen twice, and yet it has. (Here’s that earlier post again.) Both times early in the morning in New Mexico and me naked with a camera. I mean, come on. I emailed a photo to a friend in Maryland. She said, “Egads! What kind of spirit animal is that?!!!!”

The Force is with me, obviously. The gods are beating me over the head with hints. “Just write!” my wife says, but what the hell? Nothing ever happens around here. I sure wish it did.