Back Home in the West 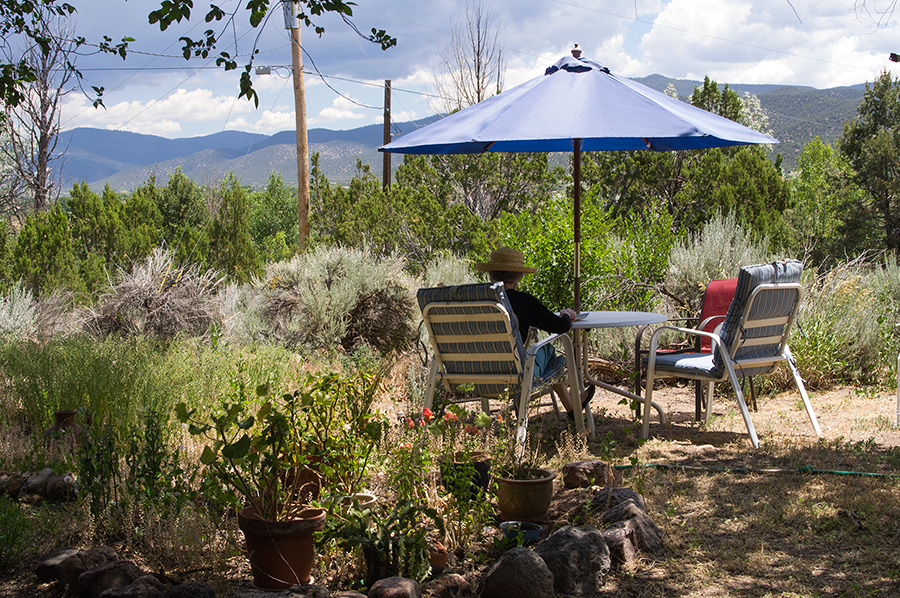 Before I’d even passed the Iowa state trooper on the shoulder, I could see his wheels begin to roll. We’d barely started out from Osceola early under a wet gray sky and I was doomed.

The road was wide, smooth, and empty. Apparently I’d flown over the crest of a hill at seventy miles per hour, because who wouldn’t and I’m the king. There were six hundred fifty miles to go. I hadn’t set the cruise control at my customary five-to-seven over the limit because we still didn’t know what it was. The dearth of signage we’d noticed while driving across the state was maddening. But on a two-lane highway that could handle four cars doing ninety, I figured that meant sixty or sixty-five and I was safe—patrolmen in northern New Mexico wouldn’t blink at ten miles over, right?

Speaking rapidly and memorized, the fine young man instructed me that there was in fact a sign just outside of Osceola five miles back and that the speed limit on all two-lane roads in Iowa was fifty-five. (The reason why there weren’t more signs: everybody simply knew.) With something of a robot parson’s zeal, he went on, stabbing the relevant entries on the citation with a gloved forefinger. He’d given me a break, he said, writing up my speed at sixty-two instead of the captured seventy-one, which meant the fine was only $114 instead of $200. Oh boy! I could pay at the courthouse. I could mail it in. I could pay online. I could trade a six-pack of hogs. What struck me, though, was that rather than acknowledging the extreme variety of two-lane roads and setting speed limits to match, the legislature in Des Moines had decided long ago that no one would go faster than the slowest of our number—think old pickups on a county road—because you really shouldn’t anyway, and aren’t you sorry that you did?

Several years before as I was driving solo back to Taos from Dubuque, I passed a clump of cars in northwest Iowa with perhaps excessive zeal. They were hanging back behind a middle-aged woman in a twenty-five-year-old Buick, leading like a mother hen. My disintegrator cannon wasn’t working. The road was straight and flat. The passing lane was clear. The others wouldn’t go, of course. There were Steve King signs up everywhere. What the hell would you do? She honked and flashed her high beams in rebuke. I felt a wisp of guilt and dropped it down to eighty. Some ten miles farther down the road, I pulled over at a turn to check my map. There must have been some other things as well, because the land yacht somehow re-appeared, still leading at parade speed—only this time the driver leveled an arm to shake her finger at me as she passed!

At any rate, we traveled on. Nebraska and even Kansas were more laid back speed-wise, and the miles rolled by, all the way to Limon. Six hundred sixty-seven miles that day because of detours, eleven hours on the road. Serious fun in places, though. With the windows open, I could stomp it with the five-speed and hear that engine sing. (There is a satisfying frequency at speed.) After dinner at a local saloon across the street, we slept under blankets with the windows open. Colorado, oh my yes.

The next day was a short one and the scenery spectacular. Thanks to our arriving and unpacking on Saturday afternoon, it was a very pleasant Sunday. We went out back to read the New York Times at the patio table in the sun. Even under the umbrella, the still air felt almost too hot for comfort. While we debated whether to retreat back inside the cool adobe, monsoonal thunderstorms appeared and rolled on south along the peaks of the Sangre de Cristos, sending waves of naturally refrigerated air in our direction. A few flies at first, and watch where you put your feet, otherwise just primal dandy fine: time went by, the wind picked up, the crossword puzzle made it through unscathed, and here we are.

It’s different in the mountains. Finally, maybe, so am I.