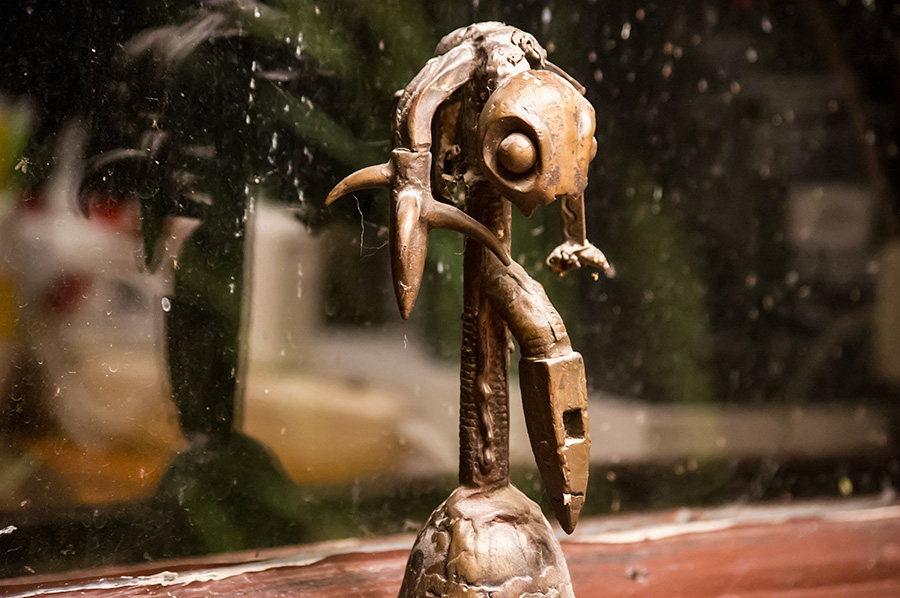 So dense and disturbing. I love it!

This was going to be a post about psycho-emotional rigidity and being blind to what’s just underneath our noses, but the requisite gumption has fled, I think. At least you get to look at this magnificent weirdness produced a number of years ago by yours truly at the Maryland Institute in Baltimore, where I was taking a class in small bronze casting.

It’s the very first thing I made. None of it came out the way I’d intended, and in fact there are five castings here, produced in a single pour. Three of them were complete failures, but I decided to leave the entire casting as it was (seven and a half inches high, at least a couple of pounds) rather than cut the good ones off, because the end result possessed a certain post-apocalyptic charm. Everything you see began as wax except for the honeybee, an actual expired bee I found inside the engine compartment of our beloved Jetta.

The way this casting business works, you sculpt a thing in special hard brown wax, encase it in high-temp plaster (investment), melt the wax out in a kiln, and pour the molten bronze into the resulting mold while it’s still red-hot. (Don’t want anything to blow up, do we?) There’s a lot of action with big stiff gloves, face shields, and tongs, and then you get to drop the whole mess into a barrel of water! Immensely entertaining, that.

You also need imagine the sculpture upside down. Upside-down in this case is really right-side up, because that’s how I cast it. The base is actually the top, where I poured the bronze. The molten metal then flowed down the trunk of the upside-down tree, as it were, and up into the branches. At the tip of each and every one, I placed a sliver or little stick of wax, so that when the mold came out of the kiln, there would be a vent to let the air escape as the bronze poured in. That’s where things went “wrong,” because the bronze began to cool before it could fill up all the space. My vents were just too small. You can see all this when the casting first comes out of the tank, still fearsome hot and stinky. The successful vents will have filled up with bronze, leaving stalks and rods to cut away. The others and the forms they’re part of just don’t manifest, or else you end up with cool failures like the bird’s head with no bill above.

The other students in that class each made one itty-bitty little thing for their first pour. I got away with my bizarre experiment because I told my teacher that I wanted to make as many mistakes as I could in the shortest amount of time, so I would learn faster, and he was good with that.