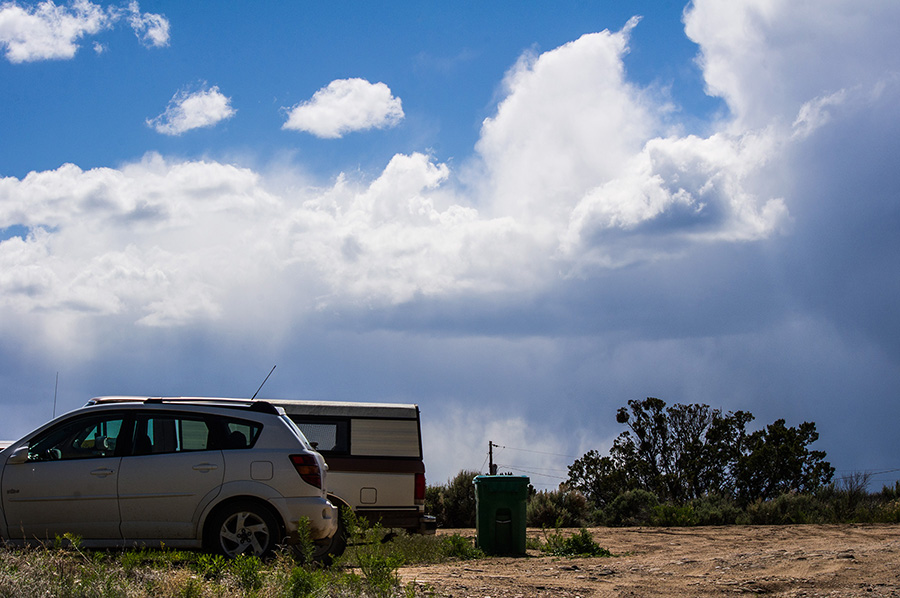 Walking rain in the distance »Buy This Photo!«

I was just about to serve our dinner when I saw the battered Jeep Cherokee pull into the driveway. The driver stopped but left the engine running noisily, then got out and started walking to the door. I put down my spatula and went outside to meet him. Barefoot, as it turned out, which put me at a disadvantage, but perhaps that would be useful, I thought.

He’d left his driver’s door wide open. The Cherokee was running badly, hiccuping and jerking while it poured out blue smoke backlit by the setting sun that made me shade my eyes. We walked up to each other. He was about my height but younger, with a closely-trimmed black beard, wearing jeans and cowboy boots,a flannel shirt, a black leather vest, and a black flat-brimmed western hat with silver conchos on the band. He moved slowly, as if weighted down, and when he spoke, the words came half as fast as mine, dragged by chains from very far away.

“Good evening, how are you?” he said, and ambled closer.

“I want to do something about the road…”

My God, the road! The awful, stinking, muddy road! The terrible, demoralizing Road from Hell! The road that Taos County decided to stop maintaining years ago, the road with holes so deep you’d lose a wheel if you were going fast enough!

The Cherokee was belching fumes and shuddering. Clouds of smoke came drifting towards us as I shifted hands to keep blocking out the sun. My visitor’s name, it turned out, was Ramon. “I live in the blue house, over there,” he said with a jerk of his chin. When we shook hands, his grip was loose and warm, and he didn’t let go right away—distracted by the view, I thought, the way he stared right past me. He also wasn’t quite sure how to get moving on the road. Start a petition, maybe, or get the property owners together, something he said they’d done before in Arroyo Seco. I was half-suspended in a state of disbelief, but grateful. He wanted action, though:

“I’m going to drain those holes! I don’t care, who’s going to stop me?” he said, allowing a glint to flash across his eyes. We both understood this meant digging a ditch in someone else’s yard, someone who hadn’t cared enough himself to do what must be done. (I’d emptied the largest one back in February, working in the afternoon when everyone was gone.)

Before he left, I told him what I knew about the county roads department and the trouble I’d been through. Though he said he’d call them, it was clear that he preferred to pay to grade the road and get it done, never mind who owned it or what the county said. But maybe coming from Ramon, someone would pay attention and a miracle would ensue. I hope it does and happens before the summer, so the movers can get us out of here before the snows come back again.

He took a long time backing out. The Cherokee stalled twice. I watched him from the kitchen as I served our hot dogs and potatoes in the here and now.