Forty-Four Years Ago in April 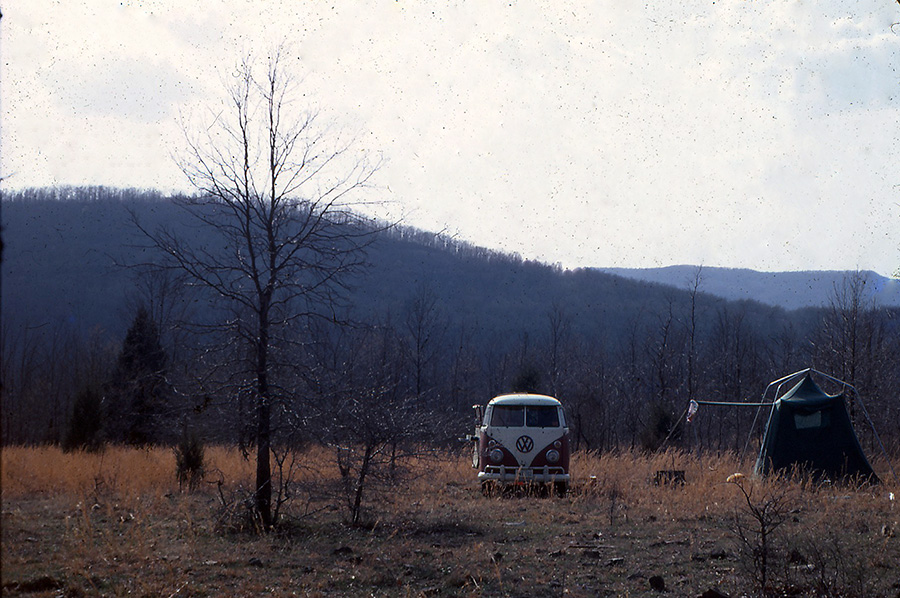 Less than one whole year, but what a workout »Buy This Photo!«

While trying to bring order and hygiene to the hopeless dusty piles of papers, artifacts, books, bins of old photos, knives and razors, small tools, musical instruments, computer gear, and magical objects that surround my desk and drive me insane, I was surprised to find a few slides—for-real, ancient, 35mm slides—from northwest Arkansas dated April, 1971. What a significant time in my life. Interesting that this popped up now, too.

That’s my very special ’63 VW camper bus and sturdy tent from Sears. I’d driven up from Wharton, Texas to scout out a spot on the 170 acres four friends of mine and I had purchased earlier that spring. We paid ten grand. Yes, that’s fifty bucks per acre. Other than being in darkest Arkansas, about which we were dangerously naive, it was a virtual paradise of woods, fields, and streams. There was even a waterfall. I was six weeks away from leaving my junior college teaching job. If I could make it until August, I’d turn twenty-seven, and my draft board would leave me alone. The government would stop trying to kill me, and I could do what I wanted! Can you imagine the tension and release?! You young guys, probably not, but try. From the “Child of God” chapter in my Taos Soul book:

By the spring of ’71, I was ready. When the big day came at the end of May, I tore out of Texas in a souped-up VW bus with Lady the Wonder Dog, fifty pounds of brown rice, two guitars, a hand-me-down tent, and a book by a yogi called How to Know God, which I never did read.

The place we’d bought was called “Yellowhammer Farm,” though there were no buildings and no one had lived there for decades. Here and there in the woods were old stone chimneys standing lonesome in the leaves, the only remaining signs of rotted-away log cabins. We rigged a tarp next to once of these that had a big stone hearth, and that became the kitchen. I remember sitting in a lawn chair under the tarp eating Sunday morning pancakes when a copperhead crawled right past my foot.

I may never have been so alive. We ate good food: rice, eggs, apples, wild persimmons, turnips, and squash, and virtually no meat. There were chickens running loose in the woods and a couple of milk goats—I used to call one over to give my coffee a squirt, right into the cup. We all sat naked in the creek together and lathered up to bathe. I spent day after day exploring in the woods and mountains. Eventually the others (except one) all straggled back to civilization, but I stayed in my eight-by-sixteen foot shack all alone well into the winter.

It was an incredible time. I had an Earth flag on a tall pole outside my shack and a privy in the woods. Autumn in the Ozarks was gorgeous, and I had everything I needed: a roof over my head, a hand-dug well outside the door, a fire to keep me warm, and a kerosene lantern to read by at night. The secret of existence, chilluns! My teeth were clean, my belly firm, and I bounded up the hollers like a deer.

I’ve mentioned this time frequently. There’s a whole half a book, forty thousand words I wrote a dozen years ago, that leads right up to the spring of ’71 shown above. All that went before, and so on, some of which is quite explicit and takes place in Austin, where there were way more people having sex and getting high. I know that goes against the myth of back-to-the-land and so on. (The few local visitors we had left no doubt what they were looking for.) But Arkanasa state troopers then were used to grabbing folks who sort of vanished afterwards, and no one I knew in Texas had any weed. The one-time clandestine trimming of actual dope plants at Pinnacle Farm across the valley happened later–barely a handful and only leaves—but it helped me and another fellow drive a truck to Dallas in the middle of the night without using the brakes. That sounds impossible, I know. It probably was. I cannot for the life of me remember how I got back to Yellowhammer, either. I may have hitchhiked, Jesus!

Few Americans growing up today relate to “dropping out.” Of course, as far as I was concerned, I was dropping in. I never did anything afterwards the way I was supposed to, either, although I tried in fits and starts. But I”m happy to remember how it was and grateful to have lived a life so far that bridges so much change. The most important thing for me is seeing how I did these things and still survived (and often thrived), without social media or Internet to tell me how to live or “like” the things my friends did as the system traced my every step, as if there’s a current or a river or a Source that carried me along and gave me everything I asked for, as if while I’ve worried over every move I ever made, I surely didn’t need to.

Someone needs to tell me that, like every minute!