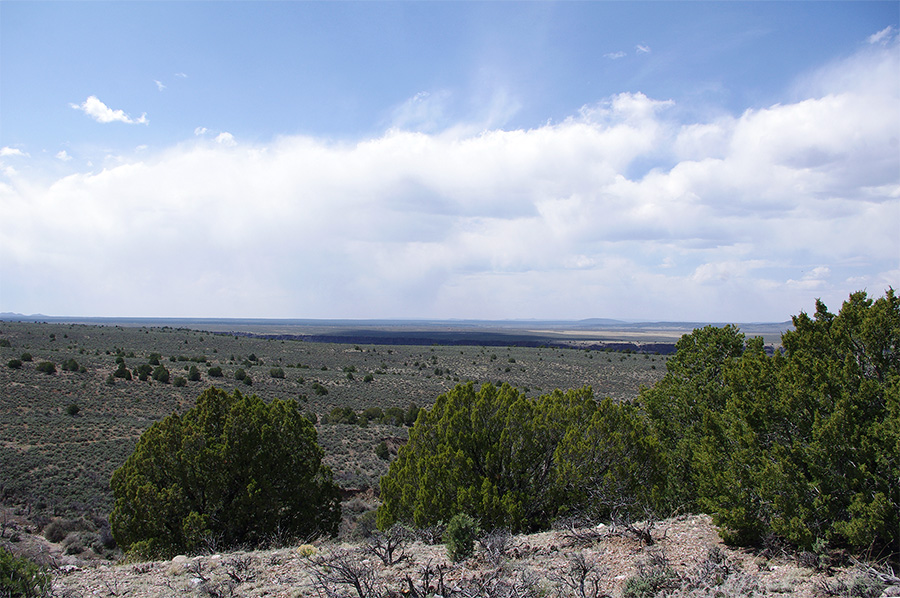 Take away the freeways, something happens »Buy This Photo!«

I was walking along this escarpment a couple of days ago. The wind was strong and blowing from the west, hitting the cliff below straight on, blasting an updraft over the top. Moments before I took this photo, a pair of turkey vultures swooped up from the arroyo below, riding on the current! It was like they just shot out of the ground, because I hadn’t seen them flying below. At that point, they were very close to me for an instant but went on to fly an immense circle almost to the edge of the gorge, then dropped back down, flew back up the arroyo, and rode the updraft over the cliff again at almost the same spot! It was quite a thing to see, the way they covered so much space from such a height without ever flapping their wings.

Today I was at a different but not dissimilar location, with contact of a sort in mind. You could think of this as relaxation into melding with the chthonic spirits, but who the hell am I to be so arrogant? Let’s just say I stood there emptying my mind as best I could, and then I felt this density and asked, what wants expression? (Real mystical shaman voodoo shit!)

At that exact moment I heard a soft, deep buzzing. I was standing perfectly still, facing the sun, with my eyes partially closed. All I could think of was a large bee or wasp. The buzzing seemed to come from in front of my head, above the brim of my cap, before circling once so close that I could feel a tell-tale vibrating puff of air against my ear: a hummingbird, by God! Not that I actually saw it, but with experience, you know. Now look at that photo again: see any flowers? There are however bright red colors in the University of New Mexico Lobos logo on the front of my hat! All right, then.

It all makes perfect sense to me, my question and the rest—one needs to grok the symbolism of a hummingbird—but then I’m lost to preachers and the grid. There seems to be assistance in the greater scheme of things, at any rate. Go forth and raise some hell.