Dying to the Past 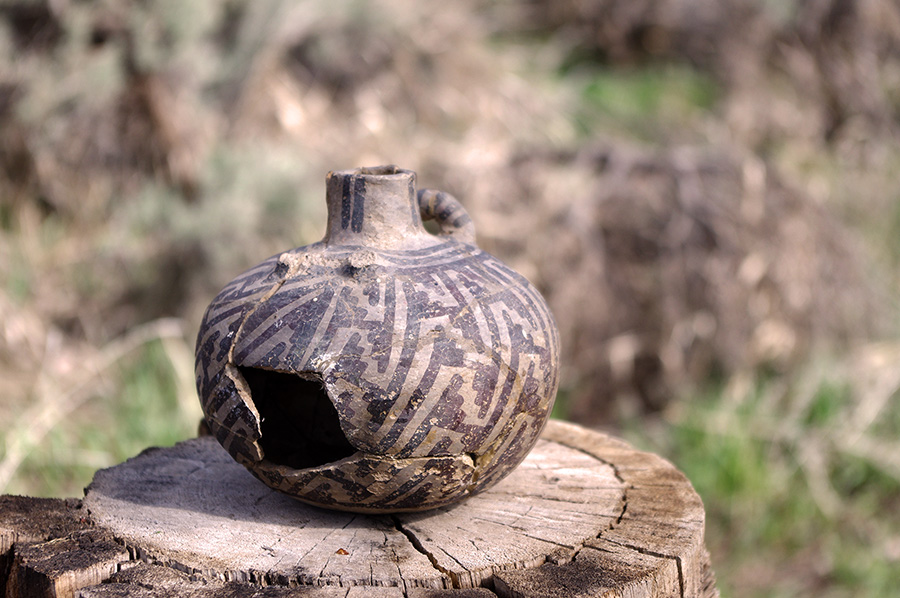 Tewa pottery from the dead landlord’s apartment and probably this very hillside »Buy This Photo!«

I needed to make the dead landlord’s sofa go away, the one we’d been using for a bloody decade. The movers who brought the good leather sofa from my wife’s studio had carried the old one out back, out of sight, but I knew it was there. The dark force of it seeped into the ground with all the rest. Inside the house, the wall behind where it had sat was cracked, pushed out from water damage and growing tree roots, signaling the end. I hadn’t looked back there since I moved in years ago. Who knew how long this had been going on? The only certainty was that one day the big elm tree would take the north wall with it as it fell.

A buddy of mine offered his muscle and his truck to haul the sofa to the dump. He knows this property well and counts our former neighbors as his friends. It’s all about heart with him. Once he told me about hearing the heartbeat of a tiny mouse deep inside a log he was cutting. Another time (as related in Taos Soul), he was driving when we came around a curve in the mountains west of Tres Piedras:

“That’s where I got my first elk,” he said, motioning with his chin. The way he said it, I knew it was a long time ago, and that he’d done it many times since then.

He told me he’d been out working nearby, when his companion shouted that there was a “cow” down in the creek. He wasn’t thinking elk, but that’s what he found after going to investigate: a badly-wounded elk cow. Someone had shot off a hind hoof, and the animal was terrified and could no longer run. He approached her cautiously. As he got up close, he could sense or hear her heart beating loudly: ka-BOOM-pah, ka-BOOM-pah!

“Don’t be afraid,” he said. “I’ve come to release you.” Immediately, her heartbeat quieted and slowed. [ka-boom-pah, ka-boom-pah]

She let him come right up to her.

He pulled out his .44…and shot her in the head!

He showed up three days later. Before getting down to work, we sat down and had a fine manly conversation about old trucks, houses, and getting what you want. He asked how our housing search was going. I told him there wasn’t much happening yet, mostly just the slit-your-throat listings that so depress my wife. Another concern, I said, was not having much saved beyond a down payment if we did buy. He said he thought my writing would take off once we had a place and things were settled. A foundation, a grounding. A week before, he’d told me to ask my heart to show us our next home. He knew that we could find one, and also said he saw “so much potential” in me and that my energy field was very strong.

I showed him the tree and the wall. No question, nothing here but tear-downs. But why had the neighbors stayed as long as they did, and why were we still around?

“There’s some kind of energy that tries to keep you here. It holds you, and it’s old. Really, really old,” he said. I knew exactly what he meant! He went on to say that the neighbors had wanted to leave but simply couldn’t. “I tried to get them to move for a whole year and a half,” he said. Eventually they did buy a home in another neighborhood and never wanted to come back—although they own the empty place next door or will, if the inheritance is ever worked out.

“Speaking of old,” I said, reaching down to pick up a large flat chunk of polished stone beside the flower bed and handing it to him.

“Yep, a piece of one. It’s old, all right. From the property around here.”