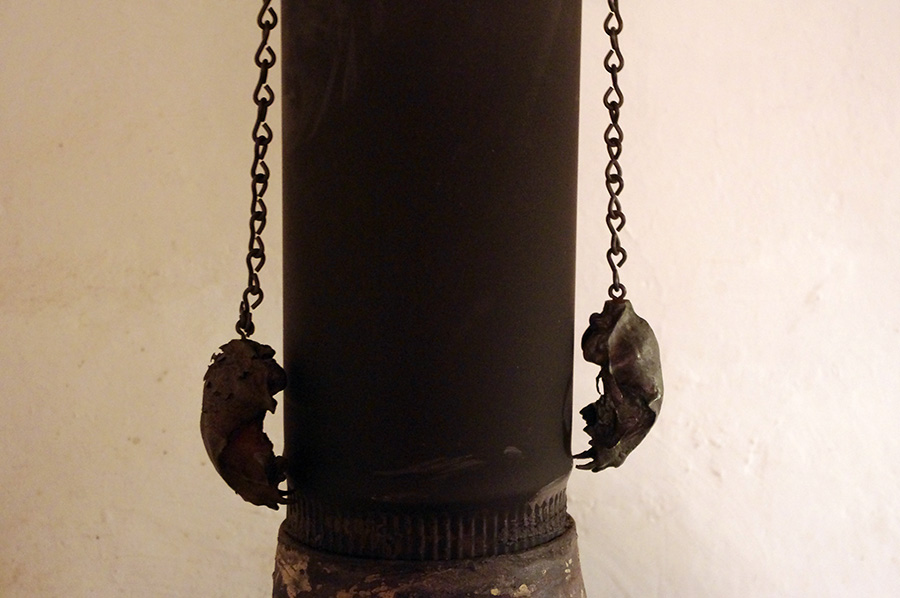 Chains draped over the damper rod »Buy This Photo!«

Because we need it, that’s why. I can’t believe how much it improves the old Ashley wood stove. God I love those stoves. You could burn a stump in this one, and maybe a small canoe. I never saw a better way to make heat inside a house without burning it down.

I made those cat skulls years ago, cast them in bronze from wax positives in coffee cans. I don’t remember what the other students wanted to copy in our mold-making class at the Maryland Institute in Baltimore, but I knew what I was after. With what I learned in the big city, I was able to take an actual cat skull, produce a flexible plastic mold encased in plaster, and turn out as many wax cat skulls as I wanted.

Next you’ll wonder where I got the real one. There were two of them, in fact. The one I used to make the mold came from a roadkill cat. I set the head under a bucket next to a bush, and a couple of months later, the ants delivered a nice, clean skull. The second one showed up all neat and tidy back in the hedgerow. Something had fallen off the old John Deere garden tractor while I was mowing along the edge of the yard. I was down on my hands and knees looking for it when I peeked under the honeysuckle, and there it was, staring me in the eye.

At first I thought I’d found the skeletal remains of poor lost Clementine. “Bad to the bone,” we called her, at first because she was shiny black with dark brown chocolate toes, later because we let her out one fine evening and she never came back. I always thought she might have snagged her flea collar on something back in the woods and starved. The thought stayed with me for years. Oh, the tragedy of that damned cat! There wasn’t any collar with the skull, though. An angel squirrel must have stolen it away to save my ass.