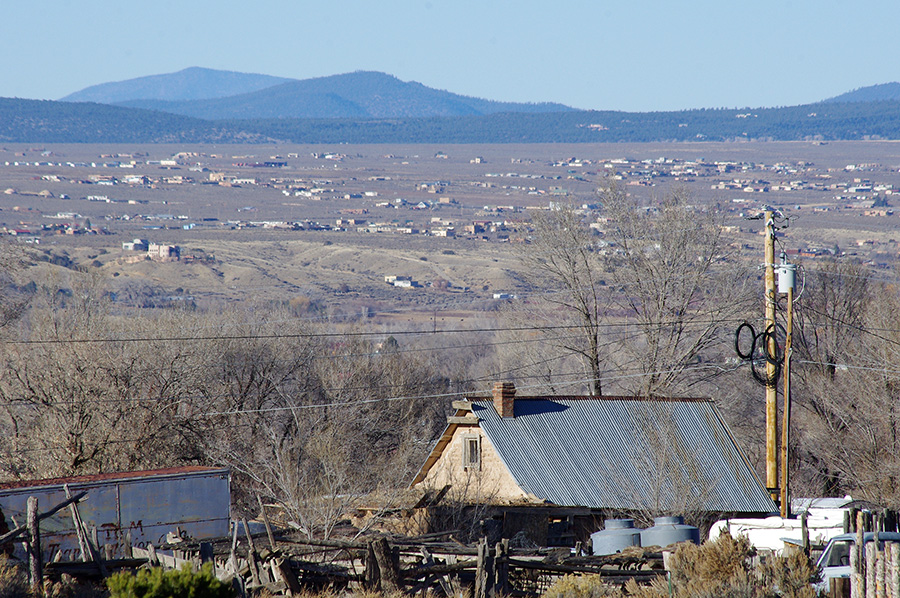 Telephoto image from across the road

Winter is fast upon us, thought Juan del Llano. The distant mesa was still bare and ugly with houses that looked like they’d geysered up from hell and fallen back to earth, but soon brown roads of mud would criss-cross snowy whiteness littered with for sale signs and the world would be as one. (His own neighborhood, already mudded-up from unplowed snow the week before, eternal in its junk and dogs, would lead the way.)

Never again, he thought, the way one does, just like the year before, and ten long years preceding that. Time was like the rest of Taos, frozen in the basalt of the gorge. The unheard creak of deep tectonic plates might have hinted at relief if one were very, very patient, but the spirits in the rocks were older than the sun and gave no hint of mortal joy. Juan sat beside the wood stove and meditated on the past. All was slippery like the ice outside the door. Without a stick for bashing demons or a bit of balance, he would fall.

He scrambled in the closets of his mind. Surely this would work, or that, but it was dark and much too hard to see. Memories flew by the way that snowflakes did at night, erupting in the high beams. When that happened in the car, the thing to do was lower them and slow down. The appeal of being tested since forever had lost its charm, in any case, while the terrible high desert beckoned like a club.

For some the way was different. Trained in fluid movement without fear, millions moved toward what attracted them, worked hard, and thrived. Others lived off someone else’s cash or paid their dues to stand in line and wait for their reward. A subset of the latter but with fewer dues, Juan’s approach to life resembled idling at the take-out window at the local Sonic drive-in while the cashier joked and let his onion rings get cold.

And yet when he was calm enough, if ever that occurred, and expected something free, it always showed up right away. A parking place, a sunny day, the next words he would type… It was as if the Universe had been there all along. It didn’t matter where this happened, either—a mountaintop, a city, underneath the covers with his wife. Somewhere in Juan’s consciousness, an opening appeared. A place of lighter density that made him feel good to remember, like thinking about the spring.

Juan had also dreamed of corn all stacked up in the fields. Huge ears in different colors, how they tasted, what it meant. Brujas scratched upon the door: more corn! He was overrun with magic, ears were pouring down the chute, it was raining things to plant and he was on it. That’s what farmers did all winter, right? Taos was so full of shit for fertilizer anyway, and he was farming for his life.