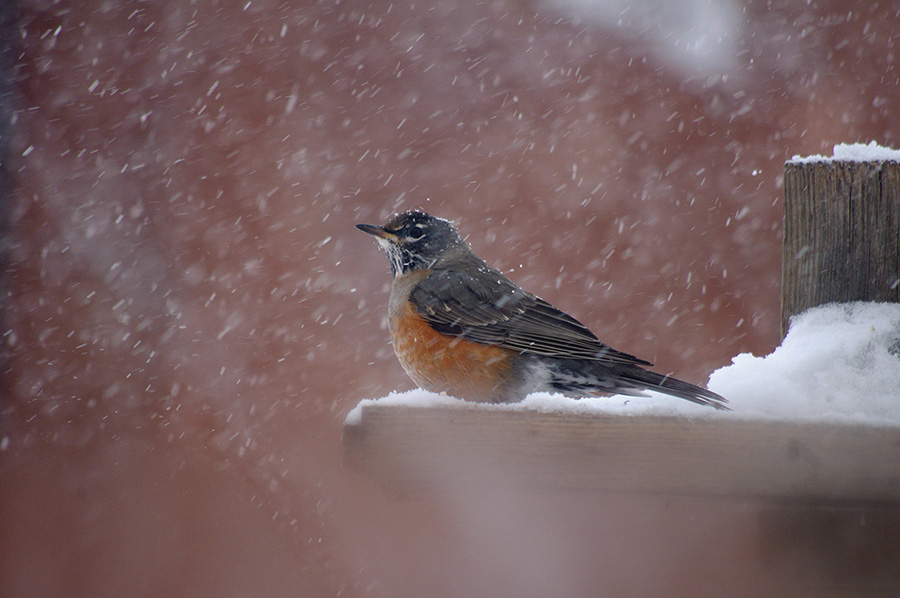 This year-round resident is not a harbinger of spring

Earlier that afternoon I tried to sleep, but I was just too tense. (Daytime naps are sometimes dangerous for me, due to things that wander in behind closed eyes.) After dinner, standing beside the wood store, my eyelids weighed a thousand pounds. I looked up at the clock:

“Hey, it’s only seven-thirty! I am so exhausted… It feels like ten o’clock!”

“Because it’s dark,” she said.

Oh yes, that. Less than four weeks until the solstice, thank God. But what about this afternoon? I’d been thinking about the honeysuckle, actually. Honeysuckle in the hedgerows and along the fences where we used to live in Maryland. My mother was from Maryland. When I was a little boy, she showed me how you could pull a blossom off and touch it with your tongue to taste the nectar. It must have been a subtle thing, because it never worked for me. I tried it several times when I was grown up but forgot how she had done it. Maybe that part never happened. Maybe I was never there.

I remember standing outside the kitchen door one evening at the old farmhouse my wife and I had bought and lived in for ten years. The sun had set but it was warm, with a scent of honeysuckle in the humid air. There were crickets, too, except that when I turned my head, they went away. (Wait, what?) I turned again: oh no! That was the first time I realized without a doubt that I was losing hearing in one ear. The grown man standing in the honeysuckle wind began to cry a little—mortal, after all. That was when I knew that we would move.

For all I love it in the mountains, we’ve never settled on a home. This is mostly financial, but I can still imagine buying a fine house with a ninety-mile view and feeling lost. An exquisite sadness, like watching someone you love get pulled out to sea by the current and there’s nothing you can do.

When I moved to Maryland in ’75, I returned to an environment I hadn’t experienced since childhood. Hot sandy soil and humid summer days. Crabs and corn and big tomatoes. Lightning bugs and honeysuckle. All was fecund and alive and blossomed in the hot white sun. It fascinated and intrigued this wandering ex-Air Force brat. Was I a man or still a boy? Everything was there, except my mother never made a mark of hope on me. Every now and then I feel the wind and sink into a long, slow ache, but I’m not after honeysuckle, am I?

My wife emerged from the bedroom in the old adobe to kiss me goodnight. She was shiny-clean and beautiful and smelled like Iowa in May.

“Are you feeling any better?” she asked.

”A little,” she mimicked with a funny voice, and then bent closer so I couldn’t miss:

We hadn’t even talked about it, and she knew. Verily I am a man. I can do what I must do, and make a story of the honeysuckle wind.