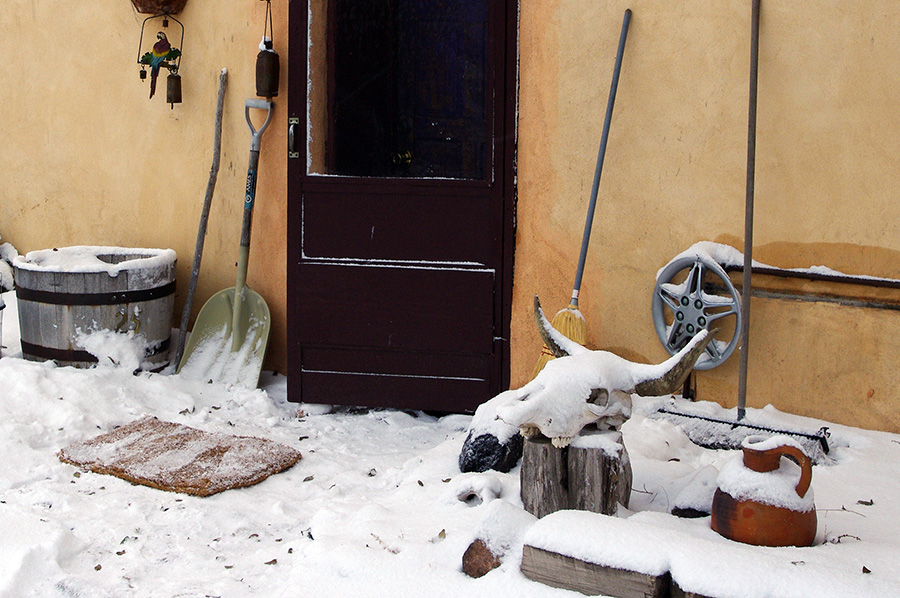 What force of will to melt a frozen brain?

Here we go again. Not Thanksgiving yet, and two snowstorms already. The first one was bigger. Snow, snow, snow. Just means I have to stay home. Maybe I even want to at first, with a wood stove six feet from my chair. Then comes the pressure. It feels so confining inside thick adobe walls with winter settling in for six long months, especially after vowing I’d never do it all again, at least not in this house.

I had a visitation from a lunatic the other day. (I know I’m crazy, but I’ve only been here fifteen years, comprendo?) He drove up in the mud and slush while I was walking back from the mailbox as the sun went down. I was looking at an extra from a Wild West movie: cowboy hat, long hair, and beard. Friendly fellow, though. Voice like a cement truck. Former tenant in the same house as us, lived there ten years before the heroin addict. I wish I were making this up. He was looking for the people who used to live next door because he needed someone to help take care of his two horses, or maybe I got that part wrong. How would they have been of any use? Like leaving a dead van with flat tires parked out front “to show that someone’s there” (a neighbor’s innovation), there was no logic to the tale. It was getting dark, and I was sinking deeper in the mud, standing by the open driver’s window, trying not to stare at the giant silent devil-dog in the back seat. Did I mention he was friendly?

“Say, if I come back here again, would it be all right for me to knock on your front door?”

Oh sure. I waited a few beats, but fine. What else am I going to say, freezing in the dark? Who are you? Just please don’t ask to see the old place and what became of the “improvements” that you made, because it ain’t a-gonna happen.

Why was I even there? Jesus Christ. The guy was sucking data from me like a vacuum cleaner, not to mention I was standing in the mud, holding important mail for fruitcake offers from Corsicana, and the wind was picking up. I also didn’t want the Ghost of Ancient Hippie Madness running loose around the place again, not after exorcising so damn much. What did I have to do, sacrifice a goat? Dennis Hopper used to live around the corner, down a dirt road where he roared out wasted once in a big sedan and nearly ran over a dog belonging to someone else who doesn’t live here any more. This stuff is everywhere, it’s in the dirt. Fucking pot shards, arrowheads, old bones. Everything is so damned over but it never goes away.

Just then my apparition’s cell phone rang. To my surprise, he picked it up (“Hello, honey!”), oh holy intervention. I waved good-bye and slipped away. As if. Even in this little neighborhood, I feel the weight from way down under. Sometimes I mistake it for an inspiration. Every now and then, it is!

As someone told me recently:

You’re one of the few who arrived and immediately experienced the spiritual imagination of the place and appreciated it in an articulate and instinctive way. What intrigues me is how many people move here and are tone deaf. I can’t figure out why they are here since they might as well live in Colorado: beautiful but soul-less…the chthonic spirits are absent. ‘Course sometimes a man needs relief from the resonating spirits. They can drive you mad.

One of the few is right, and I deserve a medal. I wrote once that it was like riding an electric eel. I’m also driven mad. Terrible beauty is not a joke. There’s nothing light about this place. I honestly do not get why people come here to retire, but then I have the fucking gift. I need expansion and relief. We need humor, vision, and a home.