One Fine Week in the Mountains 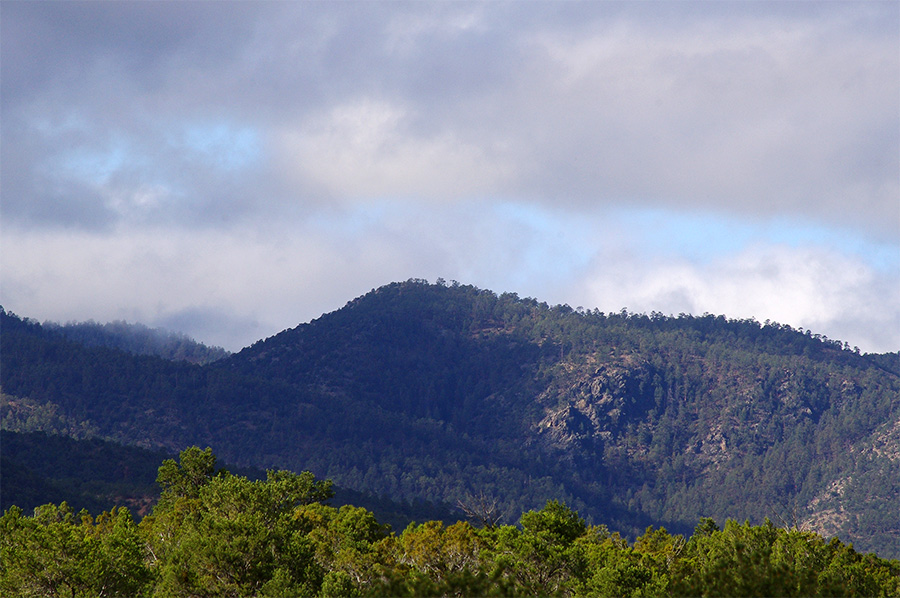 The thing once seen that never goes away

I never told you about the coyote, did I? It was maybe a week ago. For some reason I was standing behind the glassed-in screen door from the bedroom to the back yard looking out. A second later, a big brown coyote came up the path from “down by the acequia” and paused ten feet from the house or twenty-five from me, partly hidden by the sagebrush. I could see the front third of the animal. He or she was beautiful and seemed to look right at me. Neither of us moved. I stage-whispered to my wife in the kitchen, “Come see quickly! Come, come, come!” But the sound of her footsteps hurrying into the bedroom caused the coyote to whirl and vanish. (Funny it should walk right to the house, no?)

A few days later, I discovered the source of the year-long dripping underneath the kitchen sink: not a leaky drain pipe, as I’d long suspected and couldn’t prove, but a cracked cold water supply line, or so I thought. I called Gilbert the plumber who lives nearby. He’s seventy-four—and full of light— but came right over, took a look, and declared the faucet dead. Not the cold water line, but the actual cracked and leaking Chinese faucet he himself had put in just last year. He said he’d come back later with a better, brand-new item. I was grateful, but my heart sank at the news.

Don’t get me wrong. It’s a privilege to be with him just to hear the stories that come pouring out. But the job is all-enveloping. He has no assistant, so I help and watch…Gilbert is no slave to panic over missing pieces, for example, and I am. Before he comes, I work out tactful strategies to steer the enterprise, should this or that occur. But a plumber is a force of nature when released. No matter how long the actual repair work takes, the event expands to fill the day, leaving me exhausted at the end.

This time he came back after lunch with a contemporary single-handle faucet with a spray. A higher order of imported gear, for sure, and our lives were looking up. The installation didn’t take too long, amazingly. An hour after he left, I noticed the fixture turned and shifted in a funny way. I didn’t like that, but you pray and hope, and after all, we’re only renting. Ninety minutes later, there was water on the floor.

At least two connections were dripping badly. Given the hour, I improvised, taking the soaked boxes of cleaning supplies, light bulbs, and assorted household chemicals out from under the sink and placing an ancient dishpan there to catch the drips. I’ll just call him in the morning, I thought, feeling calm the way you have to if you’re waiting for the bears to leave.

Our rental situation—a consequence of finances, the evil housing scene in Taos, my own delayed maturity, and the sweet location of the place—has already gone on much too long and driven at least me completely mad. Part of this is having no control. We used to own a house in Maryland that I could fix right if I wanted to. Soon after moving here, we sold it for what a Taos doormat costs these days, a fact I’ve worn around my neck like some dead chicken ever since. I was meditating on the stench, in fact, before I went to bed and thought to check the dishpan: it had overflowed already, spilling water all over the floor for the second time that night! Many paper towels later, I shut the water off completely and left my wife a note to please not use the sink when she got up. Oh boy.

The morning dawned with much expression, shall we say, and the chicken truly reeked. I waited until nine to call my man. He came over, fiddled briefly with the faucet, and pronounced this shiny new one faulty. It was a little before ten in the morning. He had to take his wife to the doctor and buy yet another fixture—reverting to a more old-fashioned two-knob model this time—but promised to return by one o’clock. A little before four, he pulled into the driveway:

“Those doctors, they put you in a little room, and then I think they just forget you!”

Everything went well until he tried to fix a tiny leak I’d bravely pointed out, and the drain pipe fell apart. Not his fault or mine, you understand. Another facet of collapse. He screwed the pieces back together, but somehow they wouldn’t fit. “This piece is too short!” he said, begging the question of how we’d managed all these years, but never mind. This meant I’d have to sacrifice a third day, and remember, it all started with a single leak. At least the faucet worked, I told myself. Too bad about the sink.

Another day, another visit. Yesterday we put in fresh new plastic drainpipes. (I didn’t know you could bend the T-joint that way, but it works.) In the process, I learned all about sheepherding in Wyoming and why people in Talpa have to marry their fourth cousins. Gilbert is a treasure and I love him, even if figuring out the bill together took longer than the job. Everything is back to normal, then, if that counts as a condition in these circumstances.

I told my wife about the chicken, too:

“BUT THAT WAS FIFTEEN YEARS AGO!!!”

No lie, and now the trickster’s at the door. Who tricked whom, I wonder, and what for?