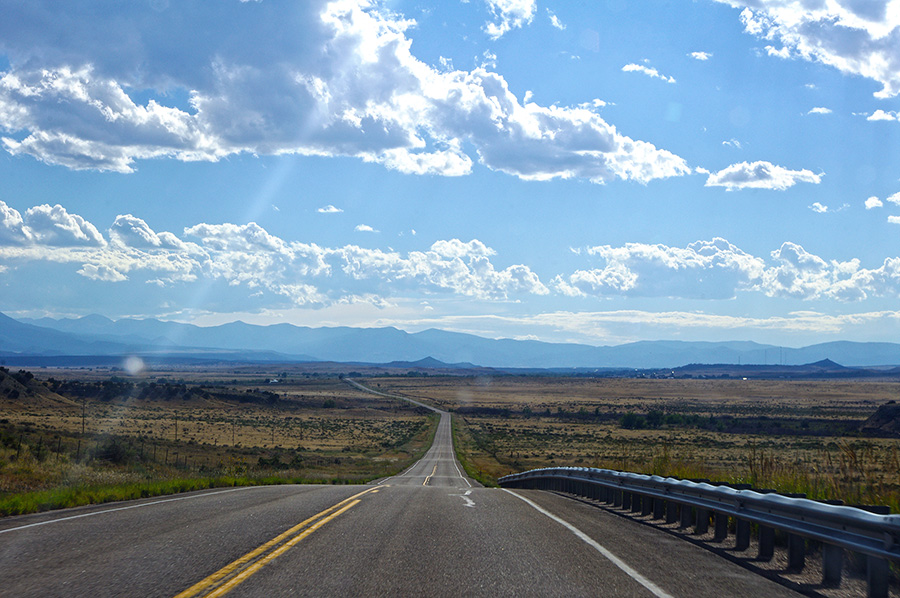 Colorado Highway 10 shot through the windshield on a happy day

Returning to Taos is always a revelation. The picture above is still southeastern Colorado, but Lord in heaven: we’re going into that. And over, and beyond.

When we used to live in the East and were coming back from those Iowa road trips to my wife’s family, we’d know we were getting close to the Baltimore Beltway from the bunched-up traffic zooming down from western Maryland. The tension would ease some after we finally made it past the city and reached our rural enclave on the Eastern Shore, but generally speaking, whatever connection to something greater the open spaces of the Midwest nurtured vanished in the grinding roar of the megalopolis. These days that dynamic is reversed.

The night before last I tweeted that we’d arrived safely back in Taos. Something about it sounded like a dispatch from a long-ago expedition, I thought. Like Lewis & Clark and the Corps of Discovery. (Isn’t that an incredible name?) But that’s exactly what how it is. The place feels very far from anywhere. The plunge into so much unbound Nature can be scary. Getting here takes faith and courage and is not an act of much convenience.

Taos proper is a little letdown at the end. A town is a town is a town, solace for the lonely and the body. The place they keep the things that let you live here in the desert. Somewhere to plug in this computer. You know. This isn’t news, but never mind all that, because I notice less and less.

Maybe I’m beginning to understand why I’ve always been pulled in this direction, why I have to get as close as a lazy man can be to where it’s difficult to live. One undertakes a journey only partly physical. It’s the “connection to something greater” thing. In the absence of the other stuff, the state is easier to encounter. I need it like we need a drink of water. I need it like a heart. Take away the chance to touch the numinous, and everything turns to shit. Why even go on living?

My parents believed that life consisted of a few things you could grab on forays from behind the barricades. Love and joy and hope and faith were luxuries a sane man would eschew. It’s taken many years to realize how ingrained the damage is. Every time I reinvent myself or grow another limb I feel the drag. The impact of Creation is like a lamp behind the window in the dark and leads me Home, where everything is possible, allowed, and free.