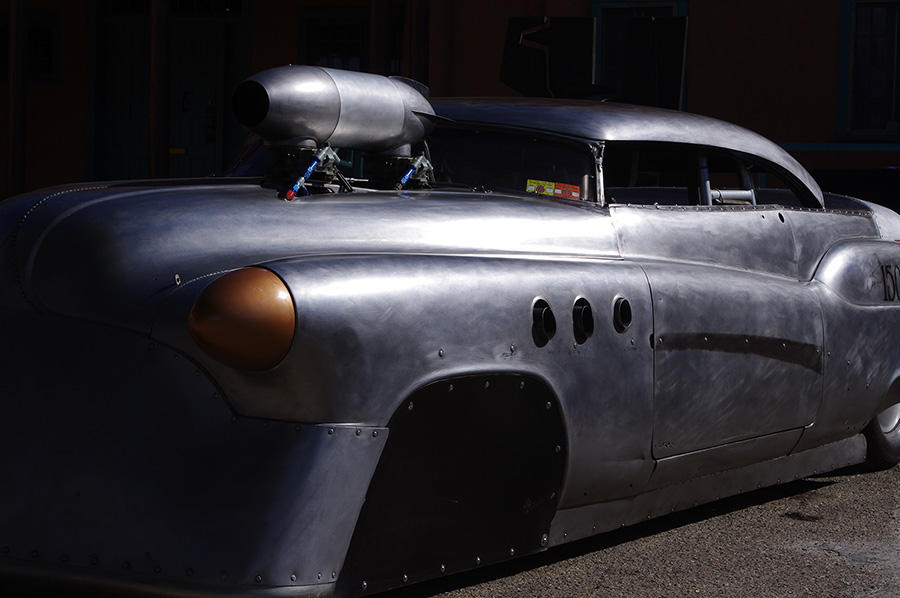 I spotted the huge red Ford truck (an F-350?) from about a hundred yards away, barreling down unpaved Miranda Canyon Road toward the stop sign at the intersection up ahead the way so many do. The other guy could surely see me but apparently had no thought of stopping. Of all the nerve, I thought, and dangerous, too. For several years now I’ve been on a hopeless one-man neighborhood crusade to alter that behavior in this location, so I was primed. Sometimes I just honk and shake my head, but as we were already on a collision course, I stomped on the gas to make it clear I knew I had the right-of-way. He did, too.

I wasn’t going to kill us, so I skidded to a stop on the gravel road and honked before I reached the intersection as he roared on through toward Hot Springs Road. A second later, however, he pulled over on the left side and slowed, leaving room for me to go by on the right. As I did, he swerved sharply in my direction! I slowed to a careful crawl and we both stopped.

“What the hell are you trying to do?” he yelled.

“Stop sign!” was all I said, jerking my thumb back to where he’d been, and then proceeded. So far, so good. I’m so smart.

Unfortunately, we were both headed in the same direction on a long road that went down to the highway; I’d have him in the rearview mirror all the way. To thwart any mischief and get the hell out of the way, I pulled into a driveway at the first curve. Instead of zooming by, he stopped in the road, blocking me in, and he was most offended:

“What the hell’s the matter with you, go home, get off the road, what do you think you’re doing?!?” etc., etc.

Imagine this about twenty times. I wasn’t angry, just incredulous. I hadn’t even entered the intersection where he ran the sign, and here he was yelling at me.

“There’s a stop sign back there!” I called out, rather calmly I thought.

“I saw that, but I was going faster than you!”

I have to admit, this momentarily disarmed me. “Uh, you have to stop at the stop sign…” Brilliant!

This he didn’t like, and the verbal punishment replayed. I just shrugged and said, “You gotta stop at the stop sign” three or four more times before he gave up and drove on down the road. Whew. Well, no whew. I could barely see around the curve as I backed out, but I noticed that he’d pulled into a driveway himself about fifty yards away, backed out, turned, and backed back in, facing the street, waiting to pounce when I drove by. I decided not to find out if he planned to ram or shoot me and quickly turned around the way I’d come. There was an alternate road down to the main one and I took it, holding my phone to dial 911. I guess he didn’t see me, though, because he didn’t follow.

Besides hoping he doesn’t live here, what else comes to mind? Time to stop driving like a fourteen-year-old in Abilene, Texas, perhaps? Those were the days, all right, and there were more than a few car chases, but we were having fun. A few trash cans in the alley got whacked and maybe a squirrel. Peel out in somebody’s driveway. Play the menace in the junior high school parking lot. No one was even dating yet, we jousted with our cars. Or Dad’s. But no, that’s not it. I learned a lot from those times. I know what a car can do.

This was like the time I yelled at a cop in Washington, D.C. (Don’t ever do that, by the way.) I was right and he was wrong and neither of those means a damn. There’s a higher order of awareness, anyway.