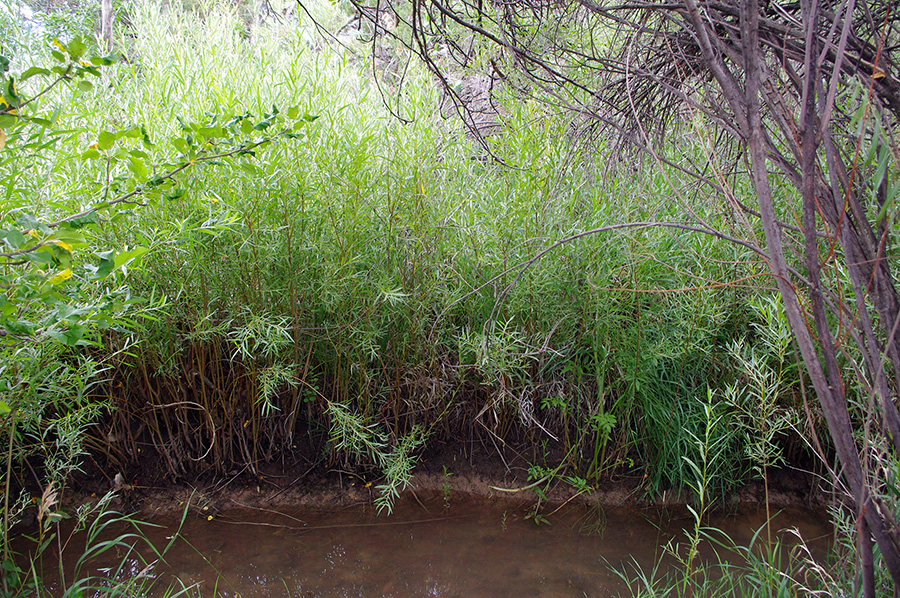 Behold the mysterious acequia! (See preceding post) Otherwise known as the “ditch”—as opposed to a “mother ditch,” which would be wider and deeper—the surviving remnants of this colonial irrigation technology brought to Spain by the Moors are still massively important to agriculture and everyday life in northern New Mexico.* Too bad this section wasn’t properly cleaned this year. None of that nice greenery is supposed be there, you see. The crew should have trimmed those willow shoots crowding the opposite bank. I don’t know how that happened. Maybe they were pressed for time, or the guys were young and didn’t realize.

The water comes from quite a ways upstream, somewhere on the Rio Grande del Rancho. It’s intriguing how this ditch gets its water, though, because we’re so much higher than the river where we live in Llano Quemado, west of the acequia. (Maybe there’s a bruja-lift!) Here’s a map (click for full version):

Can you see where our acequia starts at the river?

I’ve hiked considerable distances in the hills between here and the river without ever crossing any portion of the ditch between here and the diversion gate upstream. Not even in the area with “switchbacks” in the acequia. That’s where the mystery arises. It must be out there somewhere.

This is just a little corner of northern New Mexico, but it’s as weird as all the rest. I’ve had some incredible adventures right here in the neighborhood. Pueblo natives walked this ground before Rome and Jesus, and there are signs. Spanish conquistadors came clanking and wheezing over the mountain behind the house. I once hiked up to the top of the highest ridge without a trail and found things you wouldn’t believe, so dangerous and strange I decided not to take photos. It really scared me—that’s how strong the spirit was in that place! (There’s an account in the “Dowser Man” chapter in TAOS SOUL, available at Amazon and iBooks.) An acequia that flows a hundred feet or so above the river that it comes from seems bizarre but surely (?) follows mundane physics.

* The state of that website doesn’t bode too well, unfortunately.