Another World Down Here 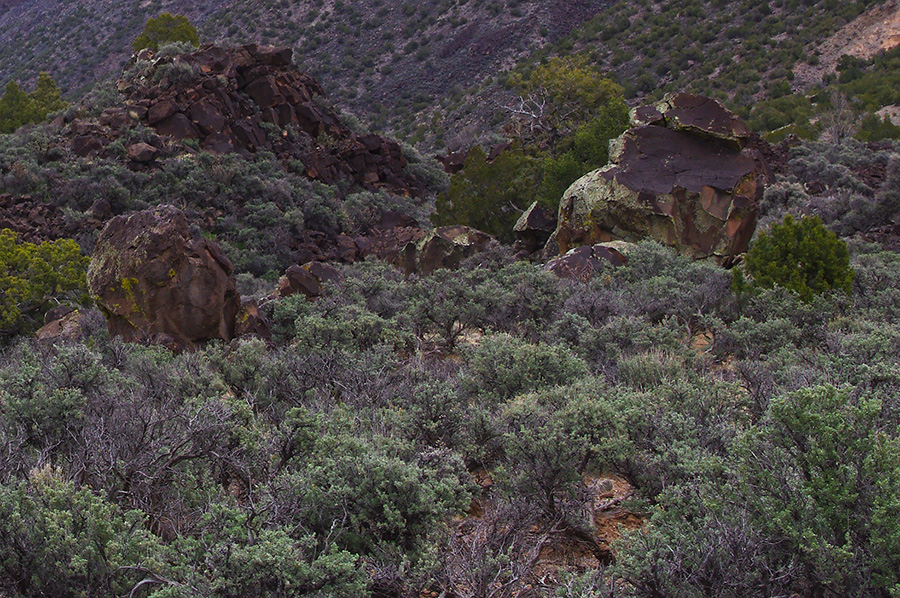 This is somewhere near the bottom of the Rio Grande Gorge, maybe twenty yards above and fifty in a straight line from the river. The top of the cliff is 800 feet above.

The scene is more unusual than you might think. The humongous boulders, for example, but especially the really sturdy sagebrush and a few deciduous trees. It’s obviously wetter than on the mesa. What precipitation that does fall gets funneled into the gorge by the cliffs on either side, and of course there is the river. When we were there today, it was running high and strong. There must be a lot of melting snow in the San Juan Mountains. I wonder how long that will last?

Walking back from this, we saw the wildest thing. Small flocks of ducks were wheeling back and forth across the gorge. They’d glide down to the river like they were going to land and then swoop up again or change direction. Canada geese flew overhead and honked. All at once another flock of ducks went by, close this time. Whatever were they doing, I thought, and then we saw the eagle giving chase! An immature bald eagle or a golden, mostly blackish-brown, with a dark head and a big ol’ eagle beak, oh yeah. It broke off pursuit at that point and flew right past us.

If I hadn’t already known it was an eagle, I’d have nailed it by the steady pump-pump-pump of its powerful wings. An eagle doesn’t mess around. You see that and you just know.