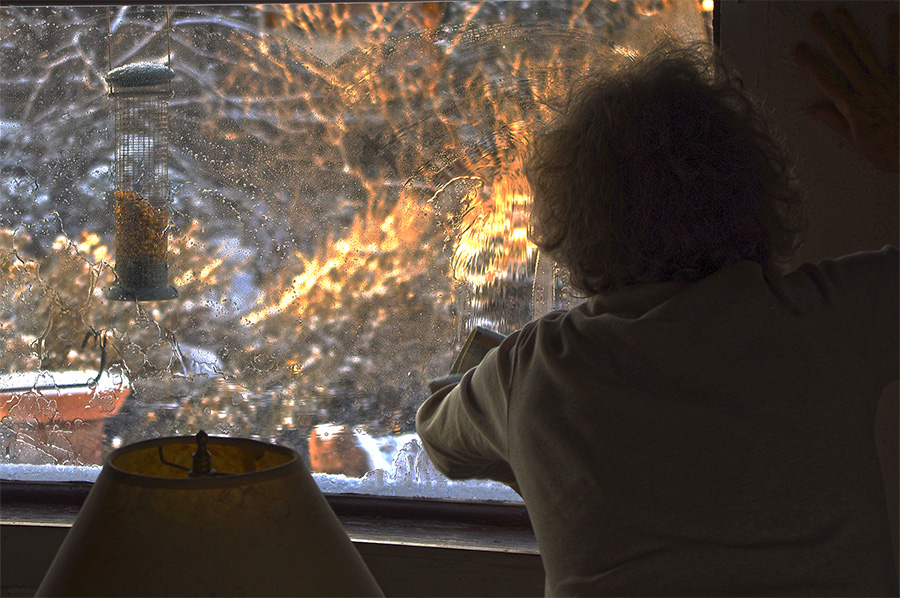 Wiping condensation off the single-pane window

A part of me likes this. After all, if it’s cold as hell outside and snowing besides, everyone’s excused. Down to zero tonight or close to it, real numbers-don’t-matter-we’re-all-frozen-dead territory. Vehicles, house, your own damn self: if something’s not fixed right, tomorrow it’s broke.

The cat’s going crazy from being inside. Sniffs at the threshhold and turns right around. Snow and a fox, you know. Had to stop feeding the birds because the fox laps up birdseed—who knew?—but as you can see, I’ve cheated. Saw a couple of juncos looking so sad and just had to. It snowed enough all day to leave a fresh blanket of white. If the fox is still in the neighborhood and comes looking, I’ll find tracks in the snow. Then what?

Old friends from Maryland are flying into El Paso this weekend to visit their son in Truth or Consequences. We’ve been through there. Once I even pulled off and bought gas. Makes you wonder, all right, but then look where I am. Anyway, they thought we could drive down to meet up. I’m not saying we won’t, but New Mexico is huge. That’s almost 300 miles, and today we’d have run into a blizzard. As another friend told me a long time ago, you have to “pay attention” in the West. If the ice doesn’t get you, the rock slides will. When the sun comes out and thaws the cliffs in the canyon, boulders come loose and roll onto the road. Skid on a curve, land in the river, get your own cross—wait, I’m getting into this!

We don’t mess around here in the Land of Enchantment. The sun goes down so fast this time of year, from day to day it’s like it’s racing with itself—by the time I wake up and get dressed, it’s almost time to go to bed. A little like being sick or held for ransom or aliens are out to kill the world by dialing back the sun. That’s why I’m aiming for the solstice. After that, a man can dream a little as the daylight lingers on the frozen mud.