Evening in the Suburbs 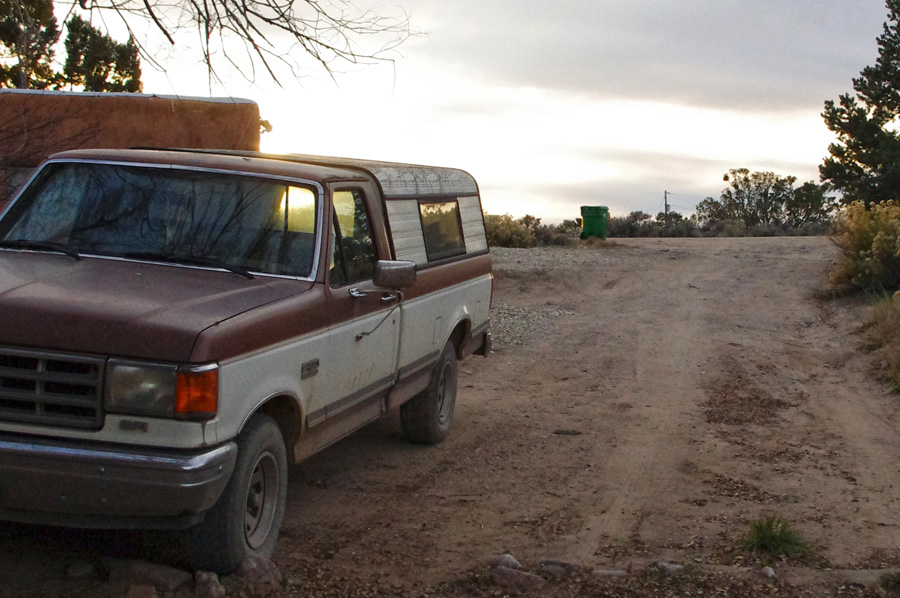 Funny how the camera takes the bumps out of the driveway

As you can see, it’s not the dead of winter yet. Sunny and dry, above average temps. There’s only a little mud, too, so that’s all right. Naturally it’s also getting darker all the time, but that’s how we like it out here in the terrible high desert when the icy cold begins to blow. Just jump in, snow like hell, and get it over with! At least that’s my formulation. Winter usually has other ideas, like jumping in and then forgetting all about the “over with” part. But so far we’ve been mostly spared.

Speaking of spared, one among us has gained a little space on death. I will now regale you with a confession of automotive guilt in the category of “deferred maintenance,” a crime almost too heinous to relate. My only defense is performance art, although in that regard I’ve failed. To wit, until two days ago, the ’87 Ford F-150 up there hadn’t seen an oil change in six long years…

I kept expecting it to die, I guess, so why bother? That, and the total mileage wasn’t all that bad for in between an oil change—embarrassing at double what you want, but still not murder. I always take care of my vehicles. Always, except this once. For weeks it would sit there unused. I never took it very far in any one direction because of course the thing was going to seize up, drop a driveshaft, burst a hose, or lose a tie rod on a bump and leave me broken in the sagebrush.

We all know what this really means, of course: I wanted it to die, so I could get a new one. Except I wanted us to buy a house before I did that. I was also hot to buy a motorcycle, even though a truck was more important and I didn’t have a place to keep a motorcycle anyway. (You will note how I made sure that none of these got done.) Someone had to pay the price for this frustration and Jesus picked the Ford. Can you say “shadow truck”? I thought you could.

Then this past year, something changed. I started walking four miles every other day, and the truck was perfect for the six-mile run out to the trailhead. Given its overall condition, faded Buddhist thingie hanging from the mirror, machete poking out from underneath the seat, and handmade calavera gearshift knob, the pickup gave me sage cred, I imagined. Not really, though. You see enough guys taking fancy bikes off racks behind their BMWs and realize that you’re just old and stupid to the spandex dude with music blasting in his earbuds. All that shaman voodoo Taos shit for nothing. But it was getting me out there, the old Ford, and something shifted in my stance.

Last Monday morning I drove it to my local quick-stop oil change establishment. It had been so long that no one recognized me. Toward the end, a fine young man emerged from the pit underneath my grateful truck to tell me that the pitch-black differential oil needed changing, too. That made sense. I’d owned the Ford for twenty years and never even looked.

But grateful is the operative word. The Ford pulled onto the Paseo with a perceptible lift. A little more power under my foot. A hint of smoothness. It was as if it wanted to go somewhere and even hit the road, instead of being made to go on errands no one wanted. The vibe inside the cab was totally different from before. The F-150 wasn’t any younger but it didn’t care. The straight six idled much more gently at the stoplights and wound out to 45 mph in second without sounding like a plane crash. There was less noise on the highway. It wanted me to buy new tires then and there but had the sense to not provoke. Pretty damn enlightened for a truck!

Once more I’d discovered the most amazing thing that everyone already knows. God help me, I may even change the antifreeze.