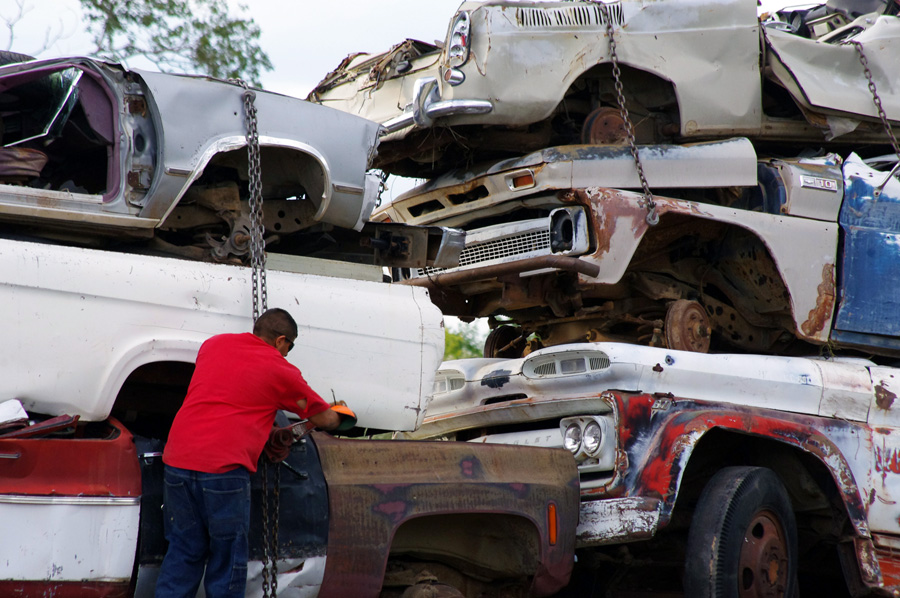 Come back wrecks, the field’s so empty now without you

Behold the modest young dude working his butt off doing dangerous work. You should have seen him going up and down the wall of wrecks using the chains as climbing ropes. This is interesting to me.

There was a time I did vaguely similar things, back when bones almost never broke and if they did who cared. But I’m not, uh, drawn to such activity any more. I honestly don’t understand what’s happened since then, either. After all, I’ve never broken a bone in my life. Maybe it’s the knowledge that if I fell or jumped from any decent height, my internal organs could rearrange themselves in strange new ways.

Between my freshman and sophomore years of college, I worked a full summer in the mighty pea fields of the jolly Green Giant. This was somewhere in Washington near the Oregon line. We lived in barracks in an actual labor camp surrounded by barbed wire with armed deputies watching you enter and leave. There was a handful of college guys in a work force of migrant workers, hobos, and ex-cons. After mandatory lights out, there’d be jokes (?) about “gettin’ the grease gun.” I saw men squeeze the juice from Sterno with a piece of cloth, mix it with orange juice concentrate and drink it. A couple of months earlier in the dorm, the word had been, “You can make really good money in the pea harvest with the overtime!” Yeah, yeah. I can’t believe I actually went out there and stayed. Going back home empty-handed was unthinkable, though, and summer with my parents would have been unbearable. And so I stuck it out.

I had numerous manly experiences working for Green Giant, and most of them were terrible. Riding out to the pea fields in the back of an open truck at 4:00 a.m. comes to mind. But toward the end of my sentence, I moved up to the job of “mechanic” on the hulking stationary harvesting machines, and that was cool. The huge contraptions sat side-by-side in a line, a dozen of them at least. They were brightly illuminated at night by ordinary incandescent bulbs that ran off electricity generated by the six-cylinder engines that powered each one. I wonder how they did that. Either there were two generators per engine, one for its own starter battery and another putting out AC, or else the bulbs were DC. I doubt we had inverters. Anyway, replacing broken or failed bulbs was one of the main duties of a “mechanic.” That, and replacing cotter pins in the gears that turned at the ends of long steel shafts.

I say cotter pins because that’s how they functioned, but what we really used were simply nails. I’d have a pocketful of them and a hammer. All of a sudden the peas would stop rolling into the heavy wooden boxes because a gear was spinning freely on the shaft. This meant I had to shut down the engine, wait for the squeaking and clanking to stop, climb up on top of the thing (about 15 feet), and pop a nail into the hole. Bang the ends over with the hammer, climb back down, hope the engine starts, and off you go. Each machine’s crew got paid based on the number of bins they filled, and speed was crucial.

What with one thing and another, I never made much money, but I did have enough to buy a Kay guitar that weighed 600 pounds and might have worked in place of that hammer. My parents were extremely disappointed and refused to pay my $800 tuition at SMU. Three days later they hauled me off to Austin, and I enrolled at the University of Texas (hook ’em, Horns!) for just $50 per semester. All in one day, mind you: pay the money, dump me in double room in a private rooming house with some other abandoned idiot, and drive away. Given the nature of Austin, U.T., and my own propensities, however, that turned out to be one of the best things that ever happened to me, which means I must have planned it all along.