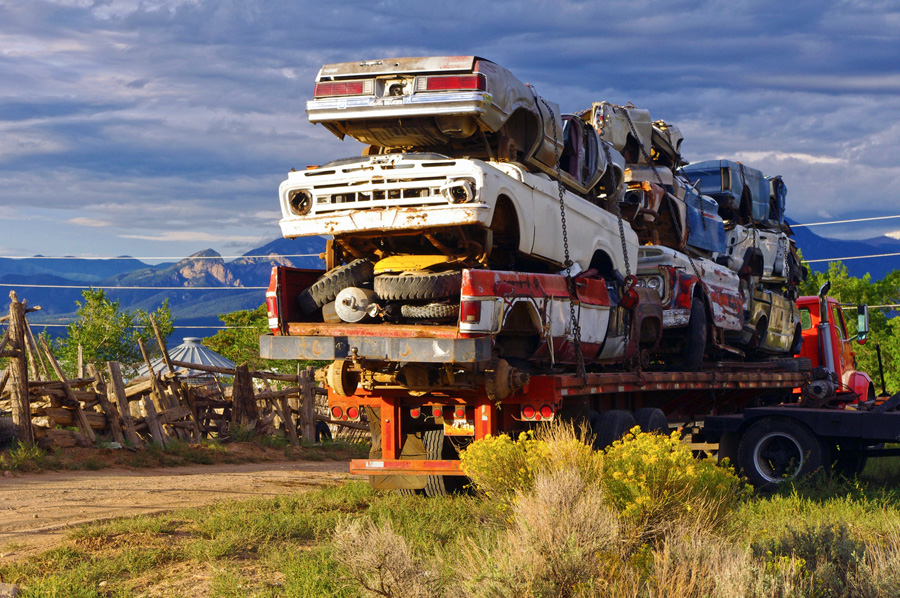 Not like this happens every day, you know, not here!

They’re leaving! If that’s not a miracle, I don’t know what is. And as metaphors go, this one is just fabulous. Those hulks have been part of the neighborhood scenery for way longer than the decade I’ve been here. The entire operation, from smashing in the roofs with a forklift, stacking the wrecks, and chaining it all down, appeared to be the work of the 20-something guy who drove the truck up here two days ago. I walked down the road to take some pictures, and he came over to shake my hand:

“Man, all the WORK it took to get those stacked up there!”

“It must be wild to drive a load like that down the road!”

Now, I am supposedly well educated, have lived a lot of places, and done a lot of things. But I never learned to drive a semi, smash cars with a forklift, and stack them three deep on a big-ass trailer, much less crank it all down tight with heavy chains. This kid has no idea how impressed I am. At every step of the way, he could have been maimed, and the whole mess still has to hit the road and get somewhere in one piece. The thought of all that weight pulling on those chains is inherently terrifying to me—if one of them breaks, it could take off an arm. There’s all kinds of other stuff stacked up in there, too, where you can’t see it: axles, wheels, a couple of engine blocks… the very thought of it starts me feeling around for smashed body parts. I wouldn’t want to be behind this rig going through the canyon—if you live here, that means canyon of the Rio Grande from Taos to Velarde—but I wish the driver well.

That was this evening. My morning was restless and strained. I’d gone to bed in kind of a mess, woke up briefly in the middle of the night realizing I wasn’t depressed, but still got up too early. Worried about my breathing, actually. No, there’s nothing wrong, but one can think oneself into any condition. At any rate, I decided I wouldn’t take my usual four mile hike—because of being tired and neurotic and all, plus it looked like rain—and was well on my way to ruining a perfectly good Sunday when my wife suggested I might feel guilty about not walking. (Well, now that you mention it…) I’d talked myself out of it due to some other idiocy, in other words, like not being famous yet. Who knows. By that point the immediate “problem” was that it was already getting on toward noon, and I knew what walking then would do to to me. But I decided to go for it: I’d do my hike, get hot and exhausted, clean up, eat, then sleep the rest of the day!

Every part of it, but especially how utterly different the most mundane things feel in the absence of guilt. IMMACULATELY CONCEIVED. Like my two-and-a-half hour nap under a blanket in the cool adobe bedroom, oh God… Being better off or younger or more accomplished wouldn’t have made that nap any better. Pretty radical for this sinner. Not a one of my parents’ generation related to me would ever have understood.