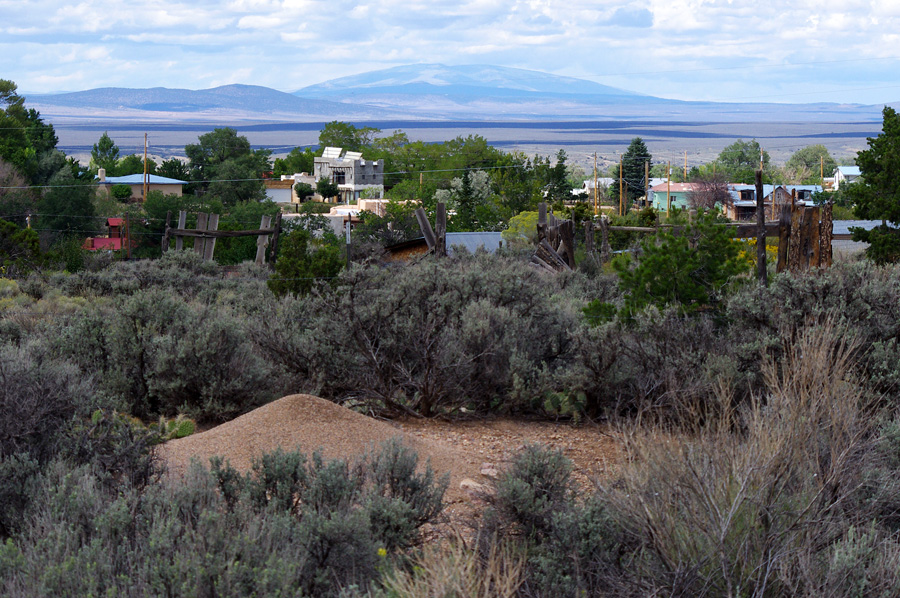 Here’s a shot from just before the heavens opened up and rained all night and most of the next day. Inside the old adobe, we just got colder and colder. When it’s damp, you really feel it. I lit the pilot lights on the two gas heaters in the house and cranked up the one in the living room for a while. That wasn’t enough of course, so tonight we had a fire in the wood stove.

That’s a typical anthill in the photo. I love the way it mimics the extinct volcanoes in the distance. The rest of this view is pure real Taos: busted slab-side fencing, never-will-be-painted bare concrete stucco, homemade solar collectors, low-hanging power lines, and all the sagebrush you can eat. No trailers in this shot, apparently. I have no idea how that happened.

We drove out Old State Road 570 this evening to spy upon a house for sale. That would be straight ahead from this shot, turn south, and drive out west toward the gorge. A major landslide blocked the road around the time we moved here, and the road gods just abandoned it. Before you reach that point, the landscape drops and twists and makes for stunning views. That’s where the house is. Straw bale and frame construction, but no portal* that I could see, and no garage. No storage or way to enjoy the out-of-doors—in New Mexico, mind you.

That’s how it often is: you pay umpteen thousand for a home and have to lean your tools against the wall and leave your car out in the snow. Rent a storage unit, keep belongings in your truck. Okay, I get it. But this place also had a too-strong whiff of owner-built without much money (the pain, the pain). I sympathize completely, God knows, and I’m fighting too. But for that and a couple acres of desert, somebody wants $230K? No way! Bargain basement for this town, I know, but just not good enough. Dreams of grandeur or escape, I guess. In Taos the stink of failure is often mistaken for sage.

* Portal (Spanish): an open, covered porch for sitting outside.