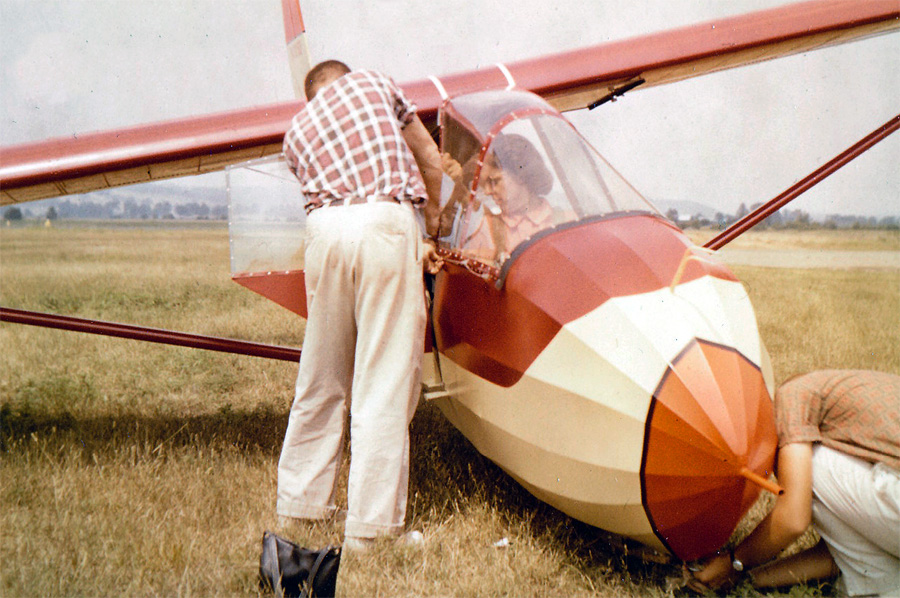 Here, let me just fix that for you

It sure is easier to praise some people when they’re dead. Not to be crude, but as a practical matter—when their bad side isn’t around to give you grief, you know? My aunt was an amazing, highly accomplished woman with friends all over the world. Independent when it wasn’t fashionable, she didn’t get married until she was 56. But when it came to family, while she was generous and attentive and my favorite aunt, she never had a lick of empathy and could no more deal with an emotional issue than fly to the moon. It was so much harder dealing with her in the later years, which I guess is something anyone who knows me can look forward to. No, wait, I’m in my later years!

Above is another photo from the Crosshill Road hoard. Judging from the rolled up cuffs on the short-sleeve shirts and her wearing glasses, I’d put this one in the late 1950s. The guy on the right is attaching the tow hook. I don’t know what the guy on the left is doing, but he’s the pilot and maybe something else besides. Oh, that aunt of mine. That thing on the nose of the glider is a pitot tube used to measure airspeed. You’re probably impressed. I’m sure I learned that from my dad, who had a lot in common with his sister. [cough] That must be her purse in the grass. I hope she didn’t leave it!

But I’m feeling prouder by the minute when it comes to all these idiots. Seriously. They’re my idiots, by God, and only I can call them that with honor. Now that they’ve finally left me alone, I can celebrate a few things. Besides the fact that no one’s driving me crazy, I mean. I can appreciate my aunt’s accomplishments, what she gave of herself to make a difference. In private moments I may even feel envy. To the world I now say, yep, that’s my aunt. Taught nursing at Hopkins, bro! Died solid and respected, even loved. Way to go, guys (the old man, too).

I’ve never been up in one of those things myself, either.