House in Maine for Sale 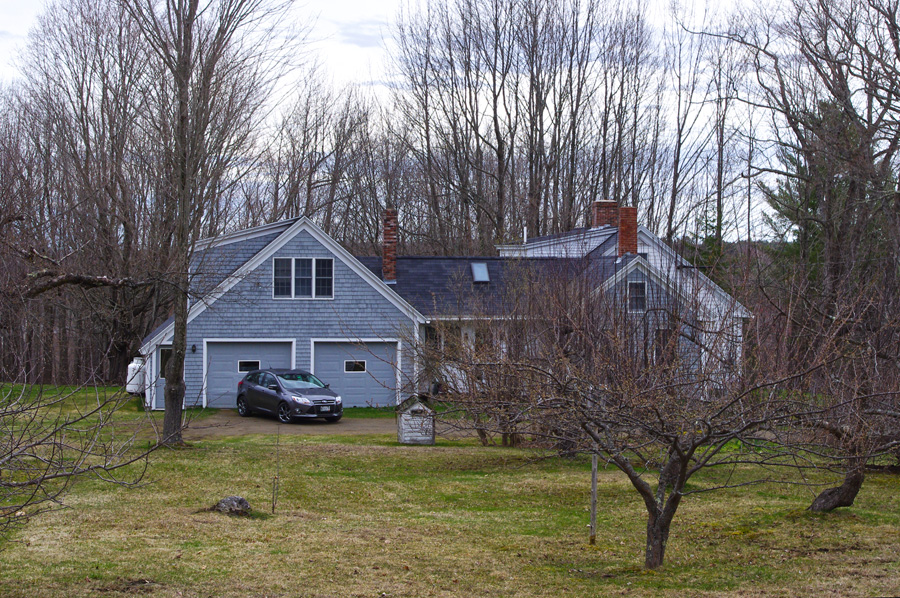 I took this shot in April. Lots greener now!

Someone needs to buy this. It’s my late Aunt Mary’s house in the country between Augusta and Vassalboro, Maine, about an hour from the ocean. Built in 1820 and extensively upgraded, it’s the kind of place I’d jump on if it were just a little cheaper (listed for $255K) and oh yeah, not in Maine. I have nothing against Maine. In fact, it’s very nice. Highly desirable, even. Just kind of cold and claustrophobic with roads hemmed in by dense, dark woods, and of course it’s far away and very strange and everyone smokes cigarettes.

Now, if she had given it to us, I might be tempted. Saving a couple hundred thousand dollars would turn anybody’s head. Plus, we know this house. I wasn’t 30 seconds into showing my wife the listing with all the pictures before she had her pianos placed downstairs, my office in the upstairs apartment, and a herd of llamas in the pasture. I mean, she moves fast. And I have to admit that when I stayed there back in April, I thought about what it would be like to live on Cross Hill Road. It’s 15 minutes into town. You could heat mostly with wood, grow a garden, and buy live lobsters in the supermarket. They even steam them for you while you wait.

It might also be a tough place to live if you’re not familiar with rural life. With 32 acres of woods, a scary 193-year-old basement, and months of snow and ice, you’d have your hands full keeping it tidy and repaired. There’s grass to mow and trees to prune. Chimney cleanings, sump pumps, and storm windows to deal with. The odd varmint invasion. You’d want to paint the outside every few years. And did I mention that there’s an oil furnace? So you’d be burning lots of wood, of which there is fortunately plenty. It’s always something and you never get done. I learned that in a much milder climate on our 2.57 acres back in Maryland. In this regard, a solid stuccoed adobe surrounded by rocks and sagebrush in the desert does allow for more spare time!

The most impressive thing, however, is the value in this place compared to what you’d get in Taos for the same price. The same can be said for many other locations as well, like my current log-cabin-home-in-the-sky spot in the Pacific Northwest, about which I know nothing, naturally, and need to be watched. I did build trails in the back country in Olympic National Park for half a summer in ’62, and that was pretty slick. (There was even plenty of sunshine.) If we ever pulled up stakes from here, I’d rather go west than east, I think.

But what I’d really like is for someone to just buy this house in Maine. It’s a great opportunity for the right people. I’ll get a tiny piece of the sale and so will a lot of other folks. That’ll help move things along. Fantasizing even briefly about my aunt’s house showed me how good it would feel to have our own place again. I know it’s going to happen, one way or the other. The desire is there. Today we watched the fiestas parade on the Paseo in downtown Taos. Across the street was an old adobe home tucked back in the trees that’s now a lawyer’s office. What a cool location. I never wanted to live in town, exactly, but I could see it with a house like that. Something about it reminded me of Austin, of all places.