Juan del Llano & the End of Nearly Everything

By late afternoon, it was 45 °F colder than 24 hours before. Soon there were four inches of wet snow bending down the trees. After supper, the lights went out. Juan’s mother was dying in Tucson. It was just another day on the frontier.

There was more snow than Juan del Llano had seen all winter. It came down as big wet flakes in howling wind, and then the wind died down, and clumps of snow fell straight down long after sunset. That was fine, but all the Aprils in his wounded brain had turned to flowered green oases where mosquitos never bit, and cold winds never tore the blossoms from the trees. A dozen years of Blood of Jesus springs like rolling atom bombs compelled the refuge, but he also wondered if it held him back.

The cat was staring at the skylight with her ears pinned back. Raccoons, by God, Juan decided, maybe even bobcats.

And then he realized it was heaps of heavy snow dropping from the trees: first the big clump, then the small ones falling in a volley when the branch sprang back. Oh. 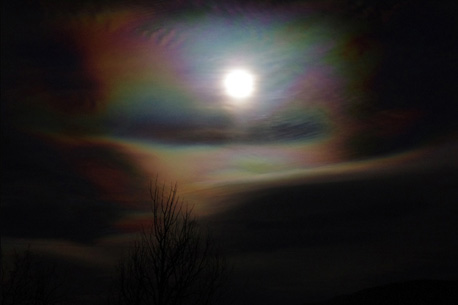 Juan thought about his 90-year-old mother in Arizona, lying in a bed she’d never leave alive. No more watching quail in the arroyo for her, no more taxes, no more Safeway. Also no more calling 911 to say the house was full of snakes or where her neighbor had buried a poisoned husband. What a year of changes, he thought, sitting nervously down to read, while the sound of what now felt like frozen chickens falling from the trees punctuated his reflections.

And then the lights went dead!

He sat there calmly in the dark and waited for the electricity to come back on the way it always did. In the silent adobe house, the crackles from the wood stove rang like gunshots. Another moment passed, and nothing happened. Juan sighed, stood up, and felt his way into the bedroom for a flashlight. Where had he put those candles? And how was he to heat a cup of coffee with the microwave disabled? It was looking to be a longish night, and without raccoons, a little duller.

The candle part was easy, once he had a light. He placed two of them beside his favorite chair and two more on the table. And the coffee, as it turned out, was a matter of remembering. The gas stove still worked, once he lit it with a match, and he heated leftover coffee in a saucepan, like his father did before him. There was nothing else to do except play his bouzouki, but that would scare the cat. Sighing once again, Juan retrieved his laptop and sat down to write. The battery was charged. All was well in Juanville, except now the candles were too bright…

It was amazing how his eyes adjusted to the gloom. Not only did he have to turn his head to keep from being blinded by the flames, they felt too hot beside his face! “WOOMPH bonk bonk-bonk!” from the roof, little crackles from the stove. Turning down the brightness on his screen, he waited for the voice of God to whisper tiny phrases in his ear. To his great surprise, it happened right away, and Juan began to write.

In the chair beside the candles, there were no distractions, save the clomping and the thumps. With the power out, he couldn’t check his email or yap on Twitter when the inspiration slowed. And then he noticed something odd and beautiful: while he waited in the pauses, doing nothing but expecting, little gemstones trickled out. Every sentence that fell into the silence was a marvel, every metaphor was gold. He tried to write them down, but each one was the seed of something new and couldn’t be connected. Afraid no more of losing, though, he tossed them back and kept on going. Who cared that the power was still out? He had found the motherlode.

Finally and not unpleasantly, a premonition arose. What if the power never did come back? Maybe this was it, and life would never be the same. People would wake up in the morning, find all their toys were cold, and have to talk to neighbors and share food. The banks would all be dead. No one would have money, and no websites would exist to blare the terror of the day. Nothing but whispers in the mind, a different song on every lip, and sitting underneath the trees.

Just then the power came back on. It was a little after midnight. Juan’s initial reaction was disappointment, which surprised him. The connection to the Source of All That Is was gone in any case, he thought, and so he plugged his laptop in and went to bed. 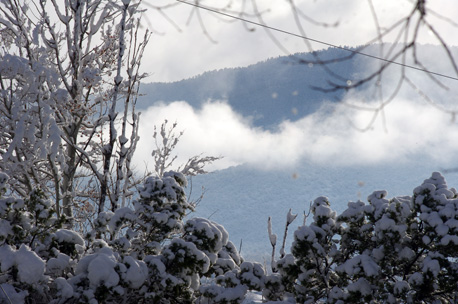 The morning dawned bright and clear with a little mist. Juan sat down with his coffee as the sun loosed frozen snow from overhead again. In less time than it takes to tell the tale, the power failed again. Juan just picked his laptop up again and wrote some more. The quiet concentrated every thought, and he was calm. At 9:25 a.m., his cell phone beeped: 600 miles away in Tucson, the old woman had slipped the bonds of Earth and joined the spirit world.

The opening he’d felt the night before had been a sign. Nothing that he needed had been missing, after all. He felt the emptiness the way he missed the perfumed springs of yesteryear, the way the melting snow ran off the roof and sank into the ground.

Next post: If I Never Raise That Door Again, It’ll Be Too Soon