I guess they know.

Ten days ago I decided for the hundredth time to go on living and went for a drive. At least I knew where I wanted to go and had a mission. Dropping a thousand feet down off the mesa to the bottom of the canyon of the Rio Grande at Pilar is worth it anyway. When we had a dentist in Embudo, just a few miles from where I shot that video, we’d take the 20-minute thrill ride just to get a cleaning. I never could believe how lucky we were. 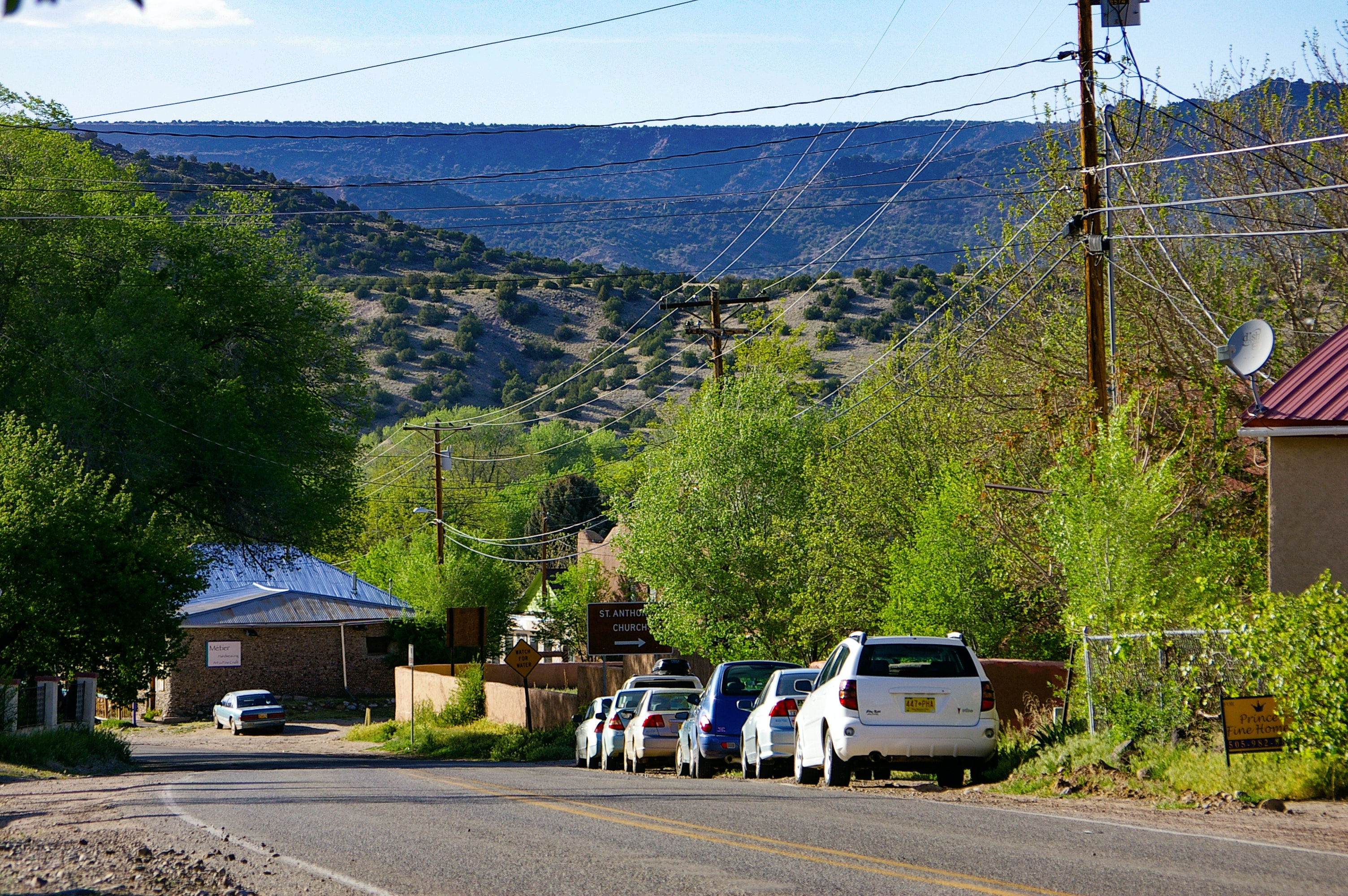 My destination this time was the Taos Junction Bridge across the Rio Grande. To get there you drive to Pilar, take the only road there is—it goes along the river—and wind your way to the end of the pavement. On the other side of the rio the road turns into rocks and dust, climbing steeply up the canyon wall with hardly any barriers to keep poor fools from driving off the cliff. Before the bridge, there’s a road that takes you to a campground and a trailhead. You can also take Picuris Trail straight from the bridge to the rim of the canyon 700 feet up and feel like you’re a hero. Those 1.4 miles are what I had in mind, to see if I could do it after not exercising for a week because of snow and mud. Right away I hit a stretch of solid ice and had to inch back down to hike along the road instead. This was just for exercise, however. The mission was to scatter some of Kathy’s ashes in the Rio Grande.

On the way, I ambled off-trail as I like to do and followed a small arroyo up the side of the canyon. I was sheltered from the breeze, the sun was shining, there was no one else around—it’s always like that here—and all was magical. That’s what New Mexico means for me, being out in Nature to have your near-religious experience or bleed out from a compound fracture. Actually, those could be the same. At any rate, a few yards past where I took the picture underneath I accidentally found another trail and followed it down to the road to get my bearings. 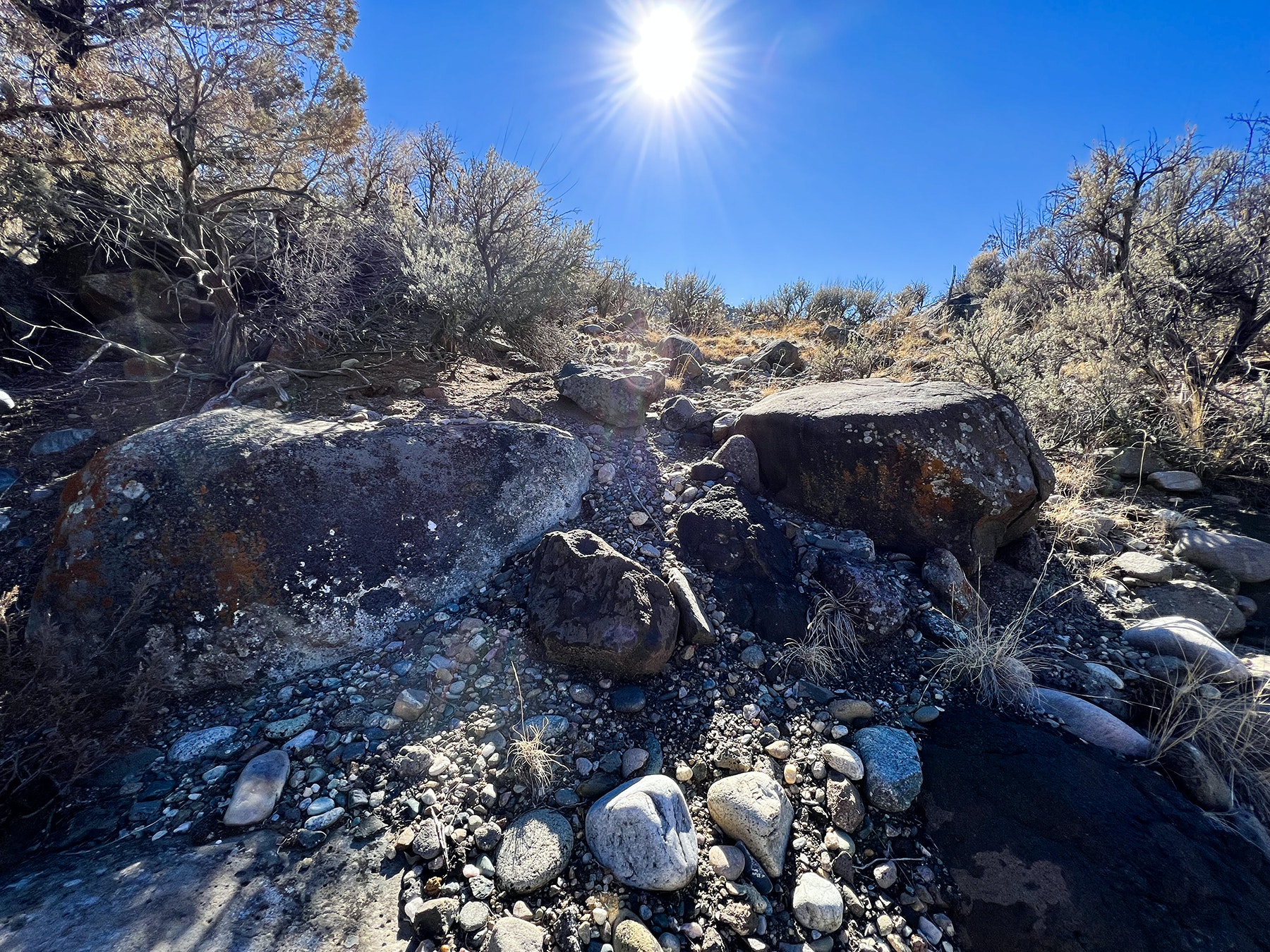 To my amazement and joy, a sign at the road said the trail I’d just descended would take me back to Picuris Trail, likely at a point above the trees and icy patches! One more U-turn and I tried again. Walking past where I’d emerged and hiked up earlier, I soon found myself in a strange and wondrous small oak forest part-way up the east side of the canyon. Nowhere in over 20 years of living in New Mexico had I ever encountered such a thing. It shocked and stirred me, frankly. What kind of oaks they were I couldn’t tell you, but there were oak leaves on the rocky ground and I was swept away to other places, other lives. The scrub oak “forests” that spring up in burned-over areas higher in the mountains produce tangled masses of deciduous brush you’d never think were oaks but for the leaves. These were more substantial, tall, with trunks as wide as half a foot or more. Gnarly weird but definitely trees. 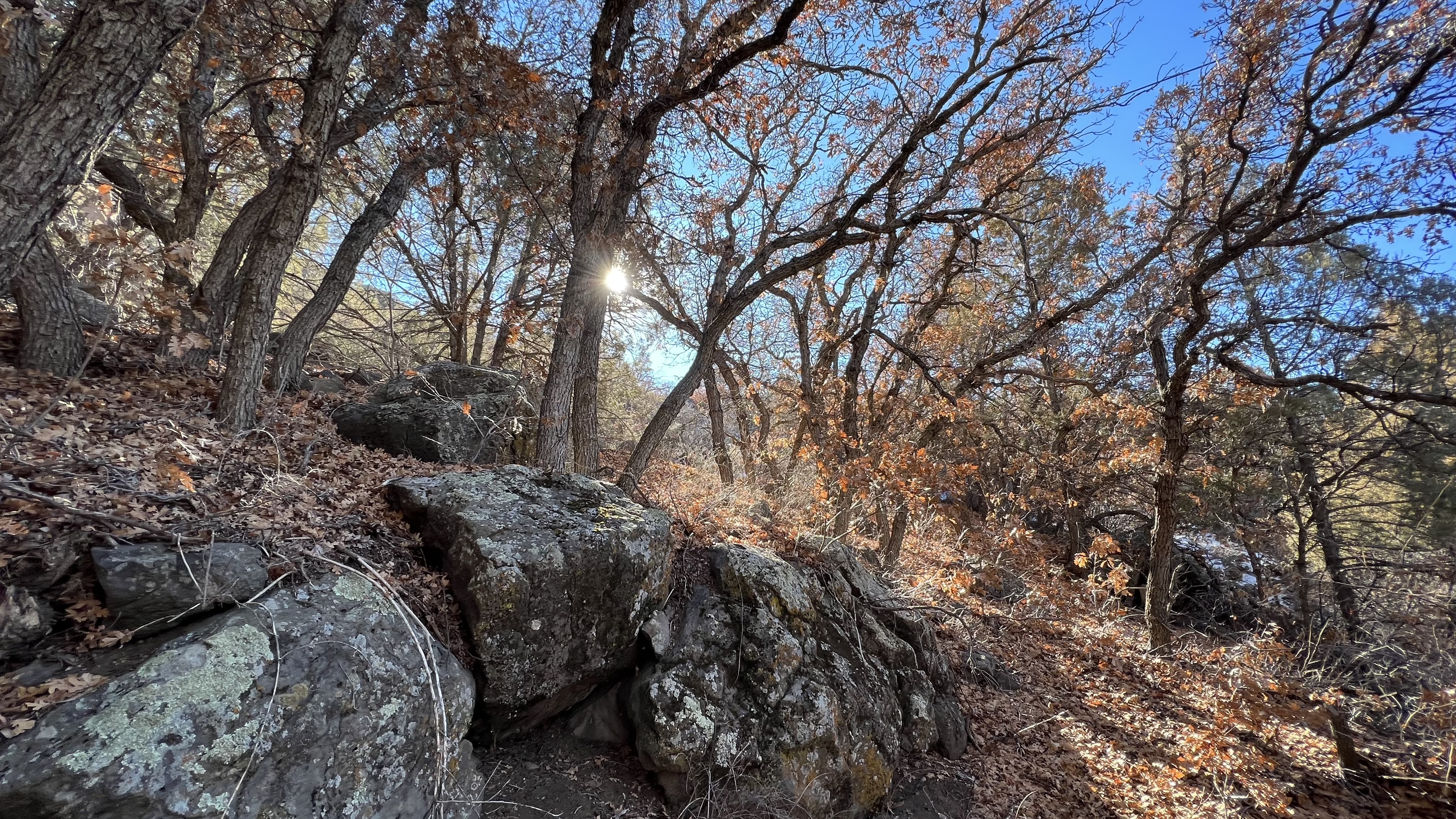 I spent over an hour walking slowly over perhaps a quarter mile of trail, if that, photographing everything. It was just that thrilling to be in a different ecological niche from sagebrush high desert. Then I saw the rocks: almost every boulder had a hole in it. One, two, three, or many. Some of them were large enough for a person to curl up inside and go to sleep if you were drugged. Then I realized I was looking at frozen one-time boiling magma. When the Earth opened up some billion years ago in these parts, it would have been horrendous. So much molten rock, bubbling with trapped gases, popping, exploding, entombing the landscape over vast distances until a fragile almost hairless ape went walking with his phone. I call this picture “BirdDog” and I’m sure you understand. 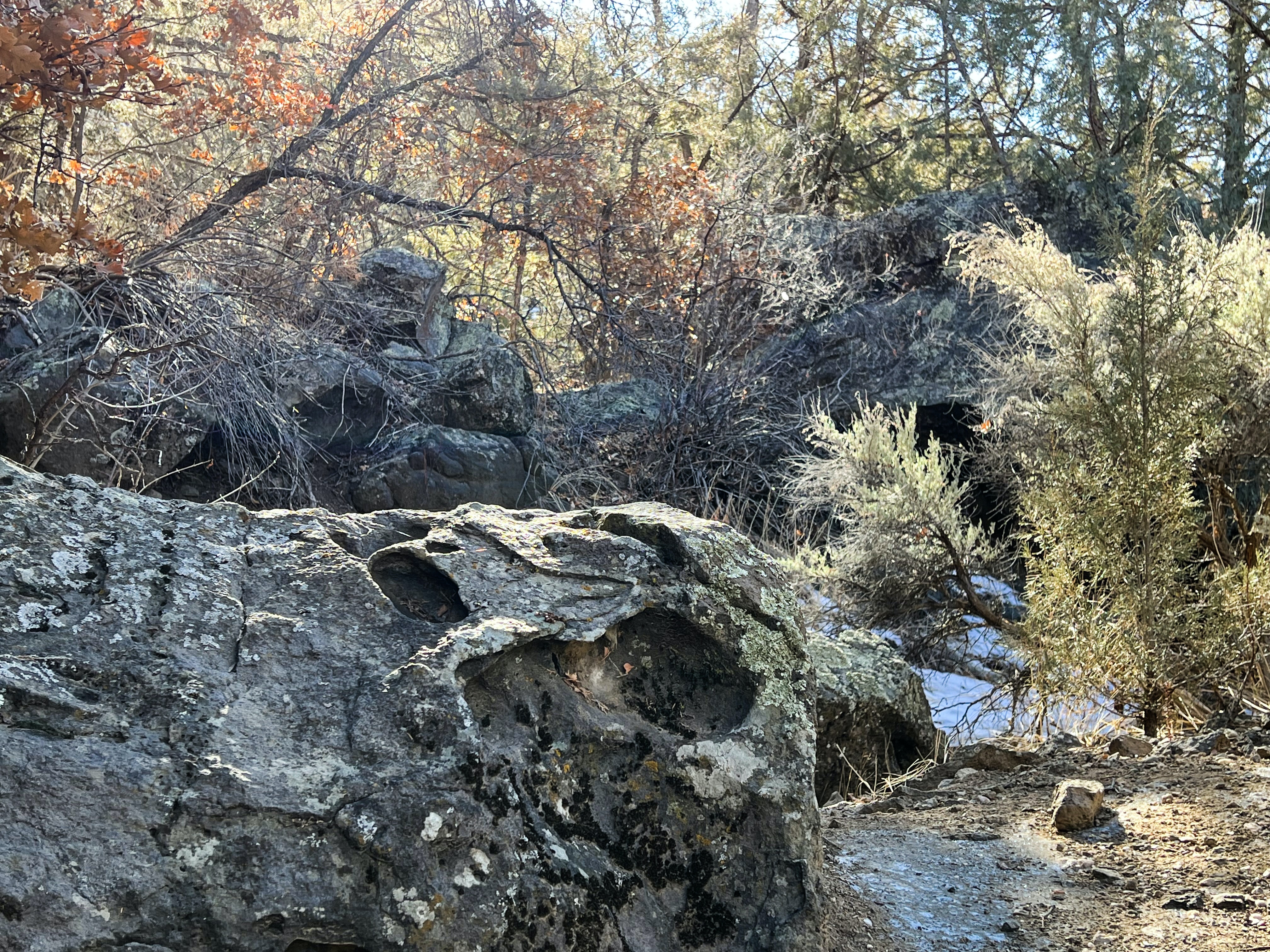 So mysterious and strange, these lava sculptures
But I hadn’t forgotten the mission. Almost, due to self-protective rules that may apply, and there wasn’t that much daylight left. The river was the thing though. The Rio Grande, where we drove up and down so often to observe the grandeur and the wildlife. Bighorn sheep, coyotes, eagles, herons, migrating waterfowl of many kinds. (There must be people in Taos who don’t know or care that you can drive down to the river and see half a dozen species any time they’re on the move. I’m not one of them.) There always seemed to be some Canada geese as well. More than one time in the canyon, we’d seen bald eagles in pursuit of geese although I never saw a takedown. Back in Maryland we lived out in the country, where huge flocks went feeding in the corn fields in the fall and stayed there through the winter, pecking in the frost. They were something of a totem animal for us, the way their comings and goings marked the change of seasons and their honking filled the air at dusk or early in the morning. Life in Kent County revolved around the geese and guiding was a local occupation, but for us the birds were messengers of the gods and not a thing to shoot. 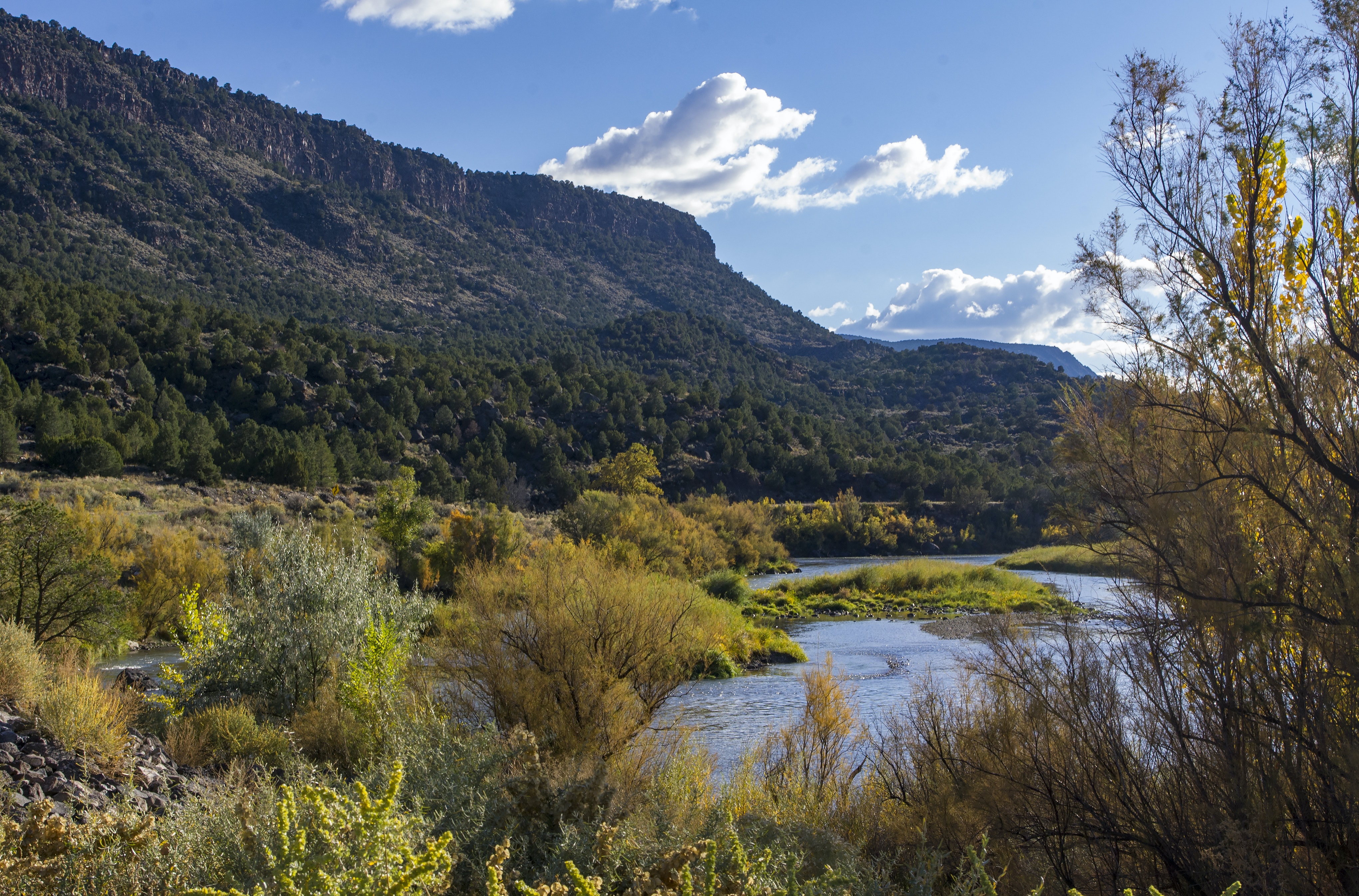 The Rio Grande from several years ago in early fall.

It’s been so terrible for me, so anguishing and sad, realizing that she’s gone. It makes no sense that I could be this old and find myself alone except that this is how it works. Someone usually goes first unless you both perish from an “act of God” or in a stupid accident. The catastrophe I’d have left behind would be the cruelest fate, though maybe that’s unfair. Our siblings could have gathered, found where all the necessary things were hidden, taken care of her—or would they have even tried? Sometimes you just can’t. My sister and a friend here offered me assistance and I wouldn’t have it! All I know is, it’s been ten whole months and I’m almost just as lost as ever.

Today was difficult. I thought about how proud I was for all those years to be with her, how beautiful and talented she was, how sophisticated, passionate, in love with life. All the qualities and experiences she brought with her and how bereft I am not having her around. How does something like that just disappear?!? Marrying Kathy was the greatest thing I ever did. I used to tell her all the time. I told her that today, in fact, before I sat down here to write, and heard inside my head: and I was proud to be with you… Some of us don’t comprehend so well at first. Watch the video again, it’s there.

NOTE: This post at Substack with full-width images. Also new at OpenSea: