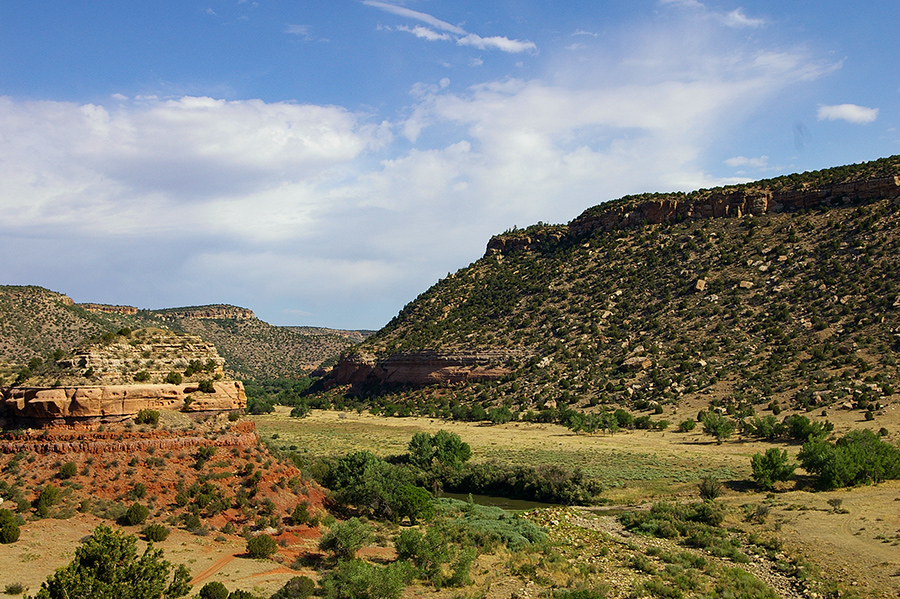 A JHF Classic from June, 2006. A column from Horse Fly, actually, an alternative Taos weekly of the time, only obliquely about the 4th of July. It has to do with things that matter.

The last ten miles of rocky trail going down into the canyon took at least an hour, most of it in first gear.

When I got to the primitive campground at the bottom, it was obvious that no one had visited in quite some time. The views of the high canyon walls all around me were breathtaking. I went skinny-dipping in the river and afterwards sat in my chair watching shadows move across the cliffs. There wasn’t another human being for miles, and Verizon was dead. I could have fallen out of the sky, tumbled from another era entirely. The only sounds were bird calls and wind in the trees.

I have probably never been so physically alone in my life. Only my wife knew where I was, and she was in Maryland. No one had seen me go into the canyon. I had a book with me and of course my computer, but I didn’t want to read or write. I didn’t even want to think.

As it turned out, no thoughts came, and I had no visions. I hadn’t expected any, but I had thought I might get a little lonesome. I didn’t. I was completely at ease and felt no fear. When it got dark, I climbed into bed in the truck and simply went to sleep. I remember waking up a few times, looking out at the moonlight, and marveling that it was so quiet. There was never a thump, a skitter, or a scrape. No bears, no mountain lions. Not even a skunk. It was like camping in a church that had neither a building nor a name. In the isolation of my experience, I felt myself expand and fill the canyon with my spirit. From wall to wall and end to end, there was only me, the rocks, the trees, the birds, a turtle and a garter snake I’d seen down by the river, and flies that buzzed around my lemonade in the sun. As I drifted in and out of sleep, I felt calm and safe as warm clean sand.

The drive home was spectacular but uneventful. Time passed. Eventually I thought some more about the things I’d seen and the fact that something called or pulled me, how I had driven out across the plains with no more goal than simply going there, that I had allowed myself the freedom to explore.

I also remembered the raven.

It happened early on. I was standing on a rock next to a tall Ponderosa pine on the edge of a precipice at the actual entrance to the canyon, watching a raven banking in a tight circle in the stiff wind just above me. I was staring very carefully to make sure I had it pegged, because the bird had made a noise I’ve never heard a raven make before: it whistled at me with a sound very much like the shriek of a hawk, only more full-bodied, longer, and strangely piercing. This didn’t make sense: why would a raven, of all things, be whistling at me? I heard the sound again. Just then the raven dived in my direction, descending to land in the pine tree, I assumed, except it kept on coming. It was diving straight at me, and I saw the raven’s face front-on. Not with my eyes, however, but with my mind: instantaneously filling my entire field of vision was the close-up face of the raven, with gleaming black beak and big red eyes! I ducked, obviously, heard the raven whistle again, and decided not to linger. It was as if the bird had projected an image of its warning face directly into my brain.

Nothing like that has ever happened to me before. And what does America have to do with this? Nothing! Not a blessed, goddamned thing!

No politics, but think about it. I did.