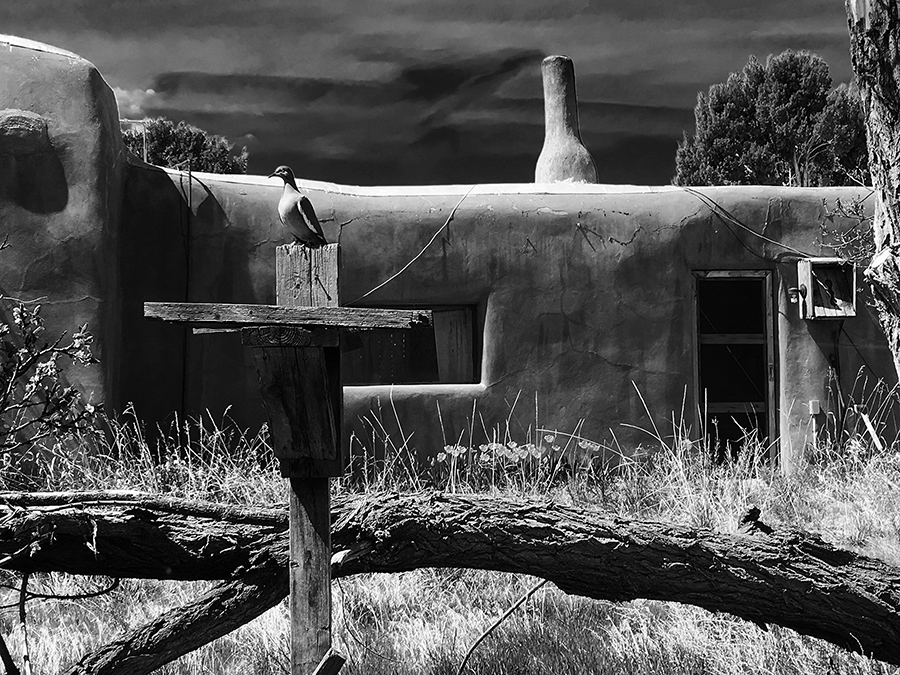 The Doberman barks all hours by the trailer down the road, jumping back and forth against his chain that flashes silver in the sun. I realize I am the dog. The eighty feet of elm that fell but only grazed the house had smashing walls in mind. Identifying with the only thing it ever tried to do, I feel a kinship and a small responsibility. Symptoms of decay and too-long-blind are everywhere, the world outside a mirror of my soul. The damage has been done, there’s too much thinking. The only thing we still can do is leave.

The expectations game is relevant. The deprivation I learned to conjure up makes it harder to escape and join the world. Even when you’ve changed inside, the outside knocks you down. That’s what living in this old adobe is like, daily confrontation with the kind of sacrifice you’d only put up with in a hide-out. Taos itself is much the same. People seem to pride themselves on hardship: “It’s just Taos,” uttered with accepting shrugs. That’s why the place is dangerous: it comes with its own built-in myth! If you fall below the level necessary to keep up, it’s difficult to imagine change.

Yesterday we visited the brand-new storage unit, four doors up from the one we’ve always had. I carried a single box of books to start the actual moving process, while my wife was taking winter clothes to hang up in the same cardboard wardrobe boxes they shipped in when we moved from Maryland almost eighteen years ago. Don’t ask me how it came to this, it doesn’t matter. Now is now, and the main thing is to get the everloving Jesus out of here, even if we don’t know where we’re going yet.

We will, of course, and soon.