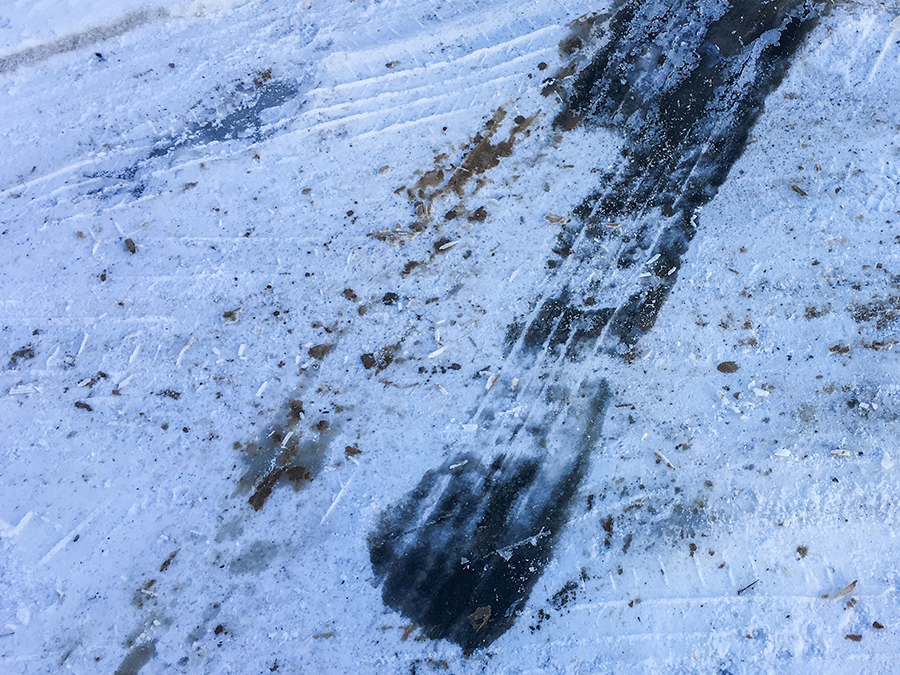 “I fucked up! I can’t stand it! I fucked up!” she yelled, sobbing and staggering through the snow. Yesterday was her turn, the day before was mine. At least she’d actually tried to do something, namely pull out of the driveway into the frozen bog we call a road. Right away she gave it too much gas and had the car nearly perpendicular—before I could stop her, she tried again and slid off into the deep stuff in the bushes. I could see her crying before she opened the door. “I thought I was supposed to gun it,” she gasped between sobs.

She was not the first. The day before, I’d broken down before I even went outside to shovel, yelling and cursing and crying that I couldn’t take it any more. “Jesus Christ, last winter broke me, and goddammit we’re still here!” I didn’t want to pull on my boots or leave the house. For sure I didn’t want to chop ice off the windshield or dig a path out to the unplowed road, but what were we to do? She treated me with kindness and only yelled a little (“I don’t want you to be this way!”), although I must have scared her at least as badly as I scared myself. Thank God there’s not a pistol in the house (I’ll never have one) and the gorge bridge is too far away. Grown man crying in the snow. I wonder what the juncos thought.

All she’d tried to do this time was make it into town and run some errands. The car was less than twenty feet from the road. There was hardly any snow at all where we’d been trying to get out, but it was packed and turned to ice from near-zero overnight cold. The tires simply weren’t up to it with a few degrees of slope to overcome. After telling her a dozen times it wasn’t her fault and dear God was I so sorry, she went back into the house and I took over. Wood ashes, dirt, pine needles, old rags, dig-dig-dig and try some more. Eventually I got the car a few feet farther up the drive, but that was it.

Before I gave up again myself to go call AAA, I saw that maybe I could pull forward just a tad, turn hard right, and get the poor car back into its parking spot. That worked, and I was right back where she’d started, only now I saw the left rear tire was flat! Of course it was, and my own fault. There must have been a nail down in the ashes that I’d spread, a remnant of the awful winter last year when I’d broken up some pallets that I’d stolen from a neighbor because the wood guy kept postponing our delivery.

The tires were not the best but still had almost half their tread. In almost any other winter driving situation save one with these precise parameters, we could have muddled by. I figured they were good through spring and maybe even summer. Too cheap, is what I am. But Allah be praised, I did purchase a battery-powered air compressor a couple of years ago and was able to pump up the flat. After a short break to monitor the rate of pressure loss to see if I could make it to the tire store, I tried once more to back the car out and succeeded. Honking my goodbye—no time to lose!—I crunched on down the semi-frozen road.

Ken at Taos Tire Factory measured the tread depth and left the rest to me. My choices were to have the flat repaired and risk more hell, buy expensive snow tires for the front and swap them out in May, or spring for four new all-season tires of a bargain brand I’d never heard of—which is what I did, never mind the beleaguered Visa card. The beautiful love of my life, my wife for thirty-six years, is not supposed to end up crying in the snow. I remembered her agonized face behind the windshield earlier and nearly lost it then and there among the smelly stacks of tires and old magazines below the useless flatscreen TV on the wall. Golf tournaments in the sun somewhere, snow melting off my boots…

I realize this is hard to understand in isolation. You need to know the context of surrounding stress. The pre-existing tension plus my-God-the-election and the sudden slam of winter. Drying laundry by the stove, the everlasting mud. How the guy in the singlewide up by the mailbox keeps his Doberman chained outside all day and night to leap and bark its life away. Nothing new about this, either. Ancient habits, never mind.

Last night was damn near wonderful. New tires on the car, a fire in the stove. We drank champagne from Christmas Day and ate the ham her brother sent us. Suitably anesthetized, I sank down in my chair to open up the laptop and catch up on the news. My honey put her jammies on and read in bed. We couldn’t hear the freezing dog behind our thick adobe walls and no one had to go outside. I told her I would let the good things come. She smiled that perfect look I know so well. Tomorrow was another day—today, in fact, which I can now confirm is even better still—and the Russian stooge still wasn’t president.

It didn’t snow today, and I have frozen laundry on the line outside.*

*It dried! Another miracle of New Mexico…