Silver Fingers on the Roof 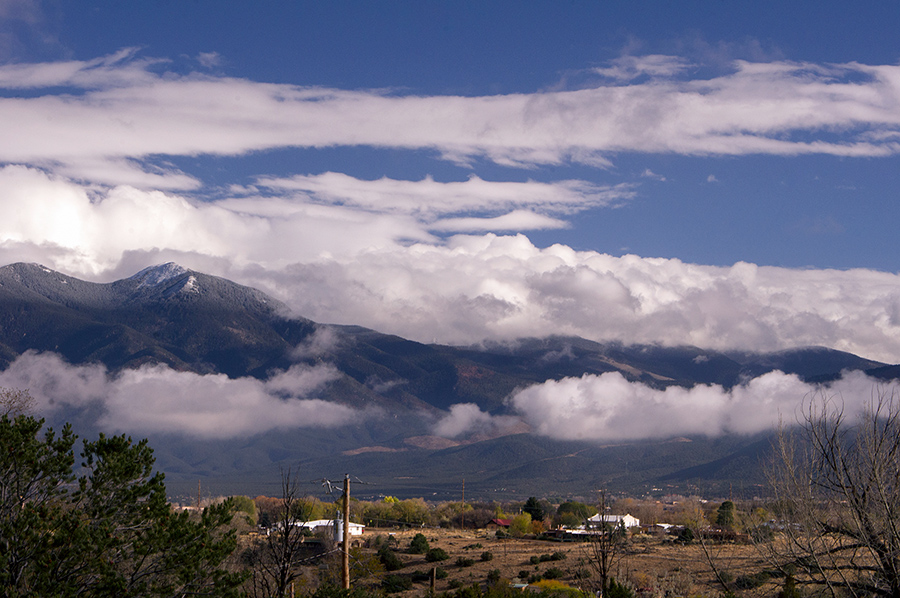 Morning light over the Talpa valley. Note the shadows in the foreground. Taos proper is down beyond and to the left.

The roof leaked like crazy the last time it rained—the same places as before, dripping quickly from the bathroom window frames and down from rotting vigas there and in the kitchen. The towels I quickly laid across the sills were sopping wet in just a few minutes. I built a fire in the wood stove, set out the racks, and wrang out the towels in the bathtub before hanging them to dry. (That’s how we’ve been drying laundry in the winter here for years.) Fortunately, we have a lot of towels.

The location of the leaks corresponded roughly to those of the canales on the west side. (Canales are simply cut-outs in the top of the wall for drainage. The spouts extend about a foot and a half in this case.) The portion of the roof along the edge of the wall is covered by ancient roofing material that sags and cracks, allowing puddles to form by the openings for the canales. I’ve patched it in various ways that work for a while and spectacularly fail. New Mexico sunlight eats sealants for breakfast, but no one’s the wiser until it actually rains again.

There was more rain and snow on the way, so I acted quickly. On the next sunny day, I painted a fresh layer of aluminized asphalt roof coating over the affected area, and it wasn’t going to work unless I slopped it on.

At our old house in Maryland, the front porch was covered by a leaky metal roof, similarly flawed by poor design, that required frequent application of the exact same product. Instead of conventional gutters, this porch had a raised edge all around that collected the rainwater and directed it to a single downspout on the southeast corner. The opening was about the size of a golf ball and always got plugged up with dead leaves or ice. Sometimes a wad of debris would get stuck halfway down, causing the water to back up under pressure and squirt out through rusted holes. Twenty-plus years later, as I stood there in the sun atop the charming, wretched old adobe we are absolutely-leaving-but-not-today, paint brush in my hand, the same petroleum smell was in the air and on my silver-colored fingers. It was as if I’d never left, and in a sense, I hadn’t.

(Why was I up there on the roof at all?)

Three nights later, there was a sharp, hard rain, sleet and howling wind, and then it rained again. This could be a problem, I thought, getting out of bed at 4:00 a.m. to check, probing with the flashlight in the dark. The fix worked, though. It often does at first.